Clearly the spell which inflates Aunt Marge in book three isn't a standard spoken spell, and is cast wandless. So there is no real 'spell' to speak of. But what is it most like? 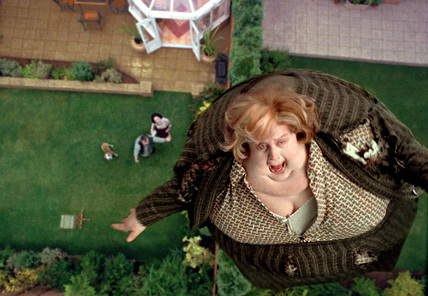 Clearly she expands a considerable amount so it may be similar to engorgio, however she also floats far more easily than she should be able to by sheer buoyancy (She'd need to have inflated to about ~80 cubic meters to get any sort of lift, which is roughly 9 foot in diameter!) so there is some sort of lift element to this charm.

What is the closest spell to the effect she feels when she is inflated?

My guess is that this was not a default spell, but some kind of scrambled together spell, performed by Harrys intuition. Remember when Harry made the window of the snakes terrarium in the zoo disappear, that was before Harry knew any spells at all.

It is hard to tell which spell is most likely for this, because harry was not able to cast spells without saying them at this point. There are many possible spells for letting an object hover and I guess there are an awful lot of spells to inflate things, too.

It is very unlikely that harry thought of using one spell in particular (or even combined spells) in this special situation. If you really want one exact spell for this, you should write a letter to J.K. Rowling and ask her, since it was not explained in detail in any of the books.

To answer your question: In my opinion (not in any book or movie) the spell that would come closest to the situation would be an altered version of Feather Light.

There are quite a few spells that could be candidates. I'll bold the ones I think are the most likely to be similar to whatever type of magic occurred to cause Aunt Marge to blow up and float away.

I would guess that the closest spells Aunt Marge might have felt like are the Feather Light charm, a hover charm, and Wingardium Leviosa.

I don't think this is really an answerable question. When Harry casts this "spell" he is agitated and the effects appear to be an unconscious magical discharge. The formal spells are a way of organizing the magic in a controllable way.

It would be like asking a pianist what song he was playing when he accidentally tripped and fell against the piano keyboard. Even if the outburst bore some resemblance to a song, it wouldn't make sense to say he was playing that song. The resemblance would be due to the fact the both the real song and the accidental song are made of the same fundamental elements (i.e., notes).

In this case Harry's accidental magical discharge summed to create effects that resemble the effects of other spells but this was only an accident of uncontrolled magic.

I would say Evanesco. As described above, it Makes something vanish (not just become invisible, but go away completely). I think that Harry probably was thinking about how much he wanted her to just go away and ended up with some sort of cross with this spell

You'll remember Mr Weasley giving an explanation to Harry about how wizards, not just those under 11 years of age, can produce magic that they would otherwise be incapable of in extreme situations as an explanation for what we later find to be Priori Incantatem. It is safe to say that the strange effects of Harry's magic and the use of non-verbal spell-work prior to his learning about it that he simply was performing magic impulsively as he became enraged. This form of magic is similar to the Obscurus, pent up magic that is released randomly when the host becomes unstable or enraged and in this case, Harry is not allowed to do magic all summer and is constantly undergoing torment from Aunt Marge. There are some however that believe the incantation to be 'Inflatus', deriving from the latin term "inflato", to swell or further yet the latin term "inflatus" meaning to puff. Hope I've helped whoever reads this.

Additionally, it could not be Evanesco, as Aunt Marge does not disappear but swell and float away. Nor could it be any of the spells on that list as they are too controlled and specific to be applied to the spell effects on Marge.

8
Was Aunt Marge ever deflated?
8
Can wizards lift and move very heavy objects with magic?
5
What did Lupin want Harry to use against Stan Shunpike in Deathly Hallows?
6
Is it possible to combine spells?

8
Was Aunt Marge ever deflated?
2
What spell do wizards use to bind elves?
3
What is this spell?
61
What exactly about Aunt Petunia is "More than meets the eye"?
12
Did Harry know that Aunt Marge will be rescued?
1
What is Aunt Muriel's maiden name?
10
Why didn't the Bond of Blood charm break when Harry fled from the Dursleys after inflating aunt Marge?