Is Tony Stark exaggerating about the potential espionage threat in the Marvel Universe?

While Tony is on a meet and greet using his smoothest moves on a world-class biological engineering genius, Dr. Amara Perera, who figured out, in an afternoon, how to safely erase the mutant gene from the Human Race... (Let that digest for a second.)

He reminds her the life of an industrialist or scientist in the Marvel Universe is fraught with espionage perils. Think I'm joking? Let Tony explain to you that NOT writing down your ideas doesn't make them safe... 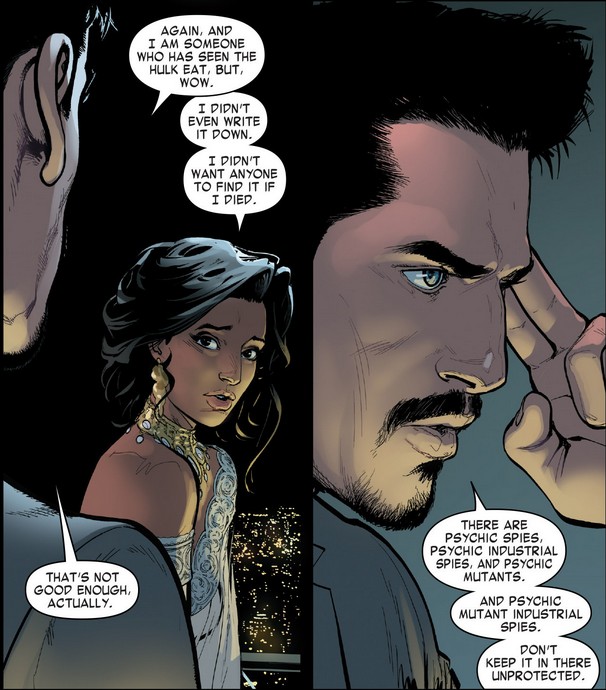 The question is: Are there such extreme specialized espionage services available in the Marvel Universe, who provides them, and are there any previously known examples of--

They don't need long dossiers, just a few sentences and maybe a link if they actually have something written on a wiki somewhere.

I was able to find examples of two of the ones you asked for. I'm still looking for the others.

The Psi-Division of S.H.I.E.L.D. is a group of psychics or telepaths that deal with psionic menaces. Source

Whether Tony was wrong or exaggerating or we just haven't encountered any yet remains to be seen.

Not the answer you're looking for? Browse other questions tagged marvel iron-man espionage or ask your own question.

36
Has there ever been a member of the X-Men who wasn't a mutant?
10
If the Infinity Gems are so powerful, why can't anyone find them?
13
Evidence of the X-Gene in 'normal' heroes in the Marvel Universe
13
Are there any psychics available to the Marvel Cinematic Universe?
34
Which Infinity Stones have we seen so far in the Marvel Cinematic Universe?
11
Can anyone heal as effectively as Wolverine?
11
Why aren't Marvel heroes more concerned with everyday life?
13
What is the true extent of Rogue's power?
12
Is there an objective answer to who "the strongest Avenger" is?
4
Does Storm have any family, i.e. are Spyke and Mij'nari canon in the main Marvel universe?