What is the purpose of the blast shield helmet?

In Star Wars: A New Hope (ANH), what is the purpose of the blast shield helmet that Luke uses? He uses it as part of his light saber and force training, but is that really it's purpose?

I can understand the specific use of such a helmet for Jedi younglings in training when there was a Jedi order, but during ANH there was none. It seems as though it was just lying around on the Millennium Falcon. 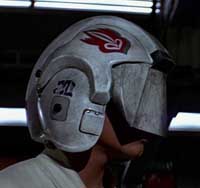 I always thought it was a welding helmet, the "glass" must allow some light to pass on high energy levels.

Meanwhile, the only reference I found is Blast shield on Wookieepedia :

A blast shield was a sheet of dura-armor shaped to preference and fitted with grips for grasping. It was capable of deflecting fire, blaster energy, and more. The shield, however, was rather heavy and unwieldy.

So it may be custom made, specially designed for Jedi training. Then it would be Obi Wan who brought it aboard the Millennium Falcon.

Actually, a friend of mine that is a pilot happens to use a similar helmet for Instrument flight rules training, its purpose in that case is to prevent the pilot from reacting instinctively to the view of the outside, which is far closer to the use in star wars. However, it more closely resembles a welding helmet, though if he can't see through it, then it does not fit the purpose.

It forces Luke to use Force sense the attack and where it is coming from instead of using his eyes to see the sphere and try to react as the laser shoots out.

There are other scenarios where the blast shield is useful

I am pretty sure the blast shield is a common accessory on fighter helmets if it is not standard.

The new (canon) novelisation of Star Wars: A New Hope indicates clearly the the blast-helmet belongs to the ship and was clearly not intended as a Jedi training device.

The old man rose to his feet, smoothing his brown robes as he searched the hold for something. Ah—a helmet.

“I suggest you try it again, Luke,” he said, placing the large white helmet on the kid’s head. Its blast shield was down, effectively blinding him.

The "blast shield" appears to be precisely that, a shield that can be folded down to protect your eyesight from the visual effects of bright lights such as plasma explosions or flying toward a sun while still providing a small amount of normal visibility.

The Radio Play describes it thusly:

Luke : With its blast shield down like this, I can hardly see

As you can see from the images below, the markings on the helmet (and indeed the prop itself) match a pilot's helmet that was edited out of a later scene and used by a female x-wing pilot. In place of the smoked plasteen blast shield, she has a yellow anti-glare eye shield. This could be evidently be removed by sliding it up into the body of the helmet. 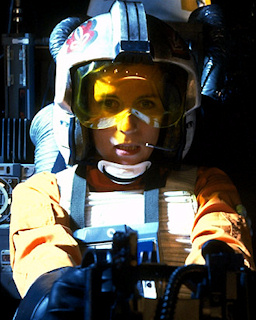 Since the helmet is of a modern design it seems more likely that the helmet belongs to Solo rather than Obi-Wan. That said, given that it was (according to the Junior Novelisation) being stored at the "Engineering station" and given the extensive weathering on it, it certainly seems possible that Solo and Chewie were also using it for welding rather than as a pilot helmet.

The authors of the Star Wars: The Essential Guide to Warfare apparently considered including an extensive description of the use (and misuse) of the helmet blast shield in their book:

A day before the third hop, they collected our helmets and brought them back with blast shields you could flip down over your face. I’d like to meet the glit-biter that put these things together — the shield was huge, and when I flipped it down the hinge practically pushed the bridge of my nose back into my skull. They told us to keep the blast shield up until it was time to fire the charges, snap it down, then pop it back up when the flash had dissipated. They said next hop they’d wire a HUD in there, but for now it was just plastoid.

Suddenly the starfield went black and the simulator pod hissed as it cracked open. The canopy lifted up and the sound of laughter filled the cockpit. Corran almost flicked the blast shield down on his helmet to prevent his three friends from seeing his embarrassed blush. Nope, might as well take my punishment. He stood and doffed his helmet, then shook his head. “At least it’s over.”

4
Why aren't baby Leia and baby Luke trained in the force?
8
What are the 'standard' Jedi Knight force powers?
12
Elements of The Force in A New Hope
10
How long did it take the Millennium Falcon to get from Tatooine to the Death Star?
33
Why did Han own a training remote?
65
How did Darth Vader know the rebel base was on Hoth?
5
Are there any canon or Legends truly 'Grey' Jedi?
10
What happened to ‘old’ lightsabers pre Empire?