Which studio owns the rights to the Watcher?

I understand that the first time that the Watcher shows up in the comics is in the Fantastic Four to warn about Galactus, but he is involved throughout several events in the Marvel Universe (such as Civil War). There is also the running gag that Stan Lee is secretly playing that character since he is playing some sort of non-important character in every movie.

That all being said, with Galactus, the Silver Surfer and the Fantastic Four being owned by another studio, and the Watcher often being tied to those properties, which studio owns the rights to Uatu?

In Guardians of the Galaxy Vol. 2,

we see Stan Lee conversing with three Watchers. His character is credited as "Watcher Informant," confirming who the characters are meant to be.

This means that Marvel Studios likely either already held the rights to the race, or made a deal similar to the one they used to acquire Ego's rights from Fox.

We don't know for sure

The film rights for Marvel's assorted characters are a complicated situation, especially when it comes to non-title, franchise-spanning characters like Uatu. To my knowledge, detailed information about the ownership of characters in that category has never been made publicly available.

There's some (admittedly scant) evidence to suggest his rights are owned by Fox. In 2014, BleedingCool reported on restrictions placed on sketch card artists related to Fantastic Four characters; they include an image of a letter allegedly sent to an (unnamed) artist forbidding them from drawing, among other characters, the Watcher (click to embiggen): 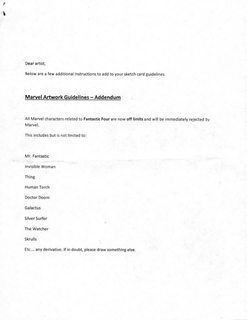 All Marvel characters related to Fantastic Four are now off limits and will be immediately rejected by Marvel.

This includes but is not limited to:

This came shortly before Marvel announced the cancellation of the Fantastic Four title series, which is said by anonymous inside sources to be related to conflict between Marvel and Fox over the 2015 Fantastic Four film

I want to emphasize that this has not been publicly confirmed, and may be related to any number of other factors. It is, however, notable.

Not the answer you're looking for? Browse other questions tagged marvel marvel-cinematic-universe copyright watcher or ask your own question.

64
Is Stan Lee playing the Watcher in all his cameos?

30
Does Stan Lee get paid for his appearances in Marvel movies?
64
Is Stan Lee playing the Watcher in all his cameos?
3
Couldn't Marvel use any of the Avengers characters?
11
Which Earth-616 Marvel character has the highest kill count?
24
Which Marvel movies have NOT included Stan Lee cameos, and why?
17
Why are so many superheroes based in New York?
7
What happens if you manage to steal the Silver Surfer's board?
14
Has it been officially confirmed that Stan Lee was talking to Watchers?
4
Can Silver Surfer kill Galactus in comics?