In Watchmen, Rorschach is reminded by The Comedian of a joke he heard once: 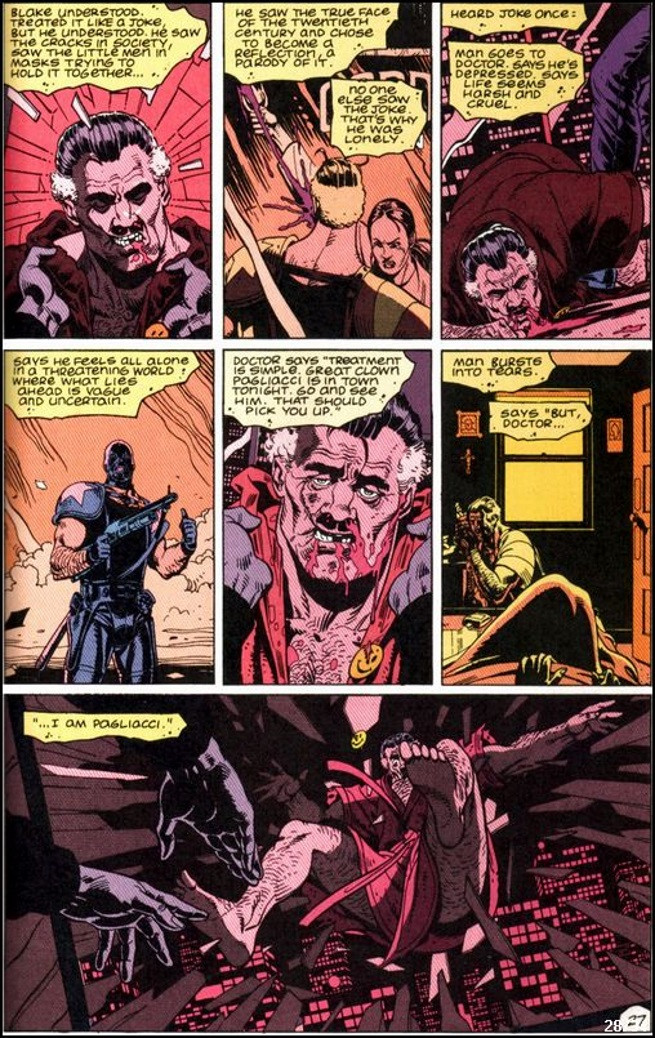 “Heard joke once: Man goes to doctor. Says he's depressed. Says life seems harsh and cruel. Says he feels all alone in a threatening world where what lies ahead is vague and uncertain. Doctor says, "Treatment is simple. Great clown Pagliacci is in town tonight. Go and see him. That should pick you up." Man bursts into tears. Says, "But doctor...I am Pagliacci.”

Was this an actual joke outside of Watchmen? And if it was, was it ever told in a manner that deserved laughter and a roll on snare drums? 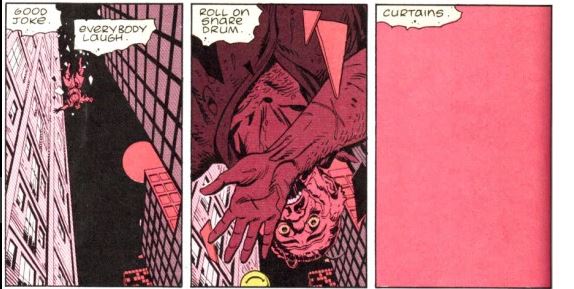 The roots of this joke are very old, and it has been attached to a variety of clowns since its inception.

That's a famous story, sometimes told as a joke, often related as fact. It's really your archetypal "sad clown" story, and indeed exactly the same tale has been told of other clowns, most notably the Swiss clown Grock (Charles Wettach, 1880-1959).

Here is one version that predates Watchmen, told of the comedian Joseph Grimaldi:

It is said of Grimaldi that he felt his work so keenly that as soon as his performance was over, he retired to a corner and wept profusely. Here was a man of tender heart and generous impulses.

There is a story about him which has been handed down by many generations of clowns. It goes on to say that once Grimaldi became very ill and despondent. He went to consult a great London specialist. The great man looked him over and then remarked:

"Go to see Grimaldi, and laugh yourself well."

The clown looked at him sadly and replied:

Another version was told of the clown Grock:

A story you may or may not have heard relates how, in the mid 1930s or thereabouts, a prematurely old-looking man asked his chauffeur to drive him to the consulting rooms of Charles Prelot, Academician, doyen of French psychologists and you name it, who'd set up his trading pad in a small palace behind the Quai d'Orsay. After half-an-hour of the usual rigmarole, it emerged that the worried patient was very rich, acutely depressed, and given to bouts with bottles of green stuff that smelt of aniseed balls. He remained somewhat vague about where his bread came from.

The face of the great savant lit up. He saw both the problem and the remedy before you could say two thousand francs.

"What you need," he said, "is a change. Go out and enjoy yourself. Spend a little money. Start tonight. Buy a ticket to the Olympia. Laugh with Grock for he is, you must admit, the greatest clown in France, if not the whole world.

The patient shook his head. "Impossible," he said. How was that?

"Because," said the man sighing deeply, "I am Grock."

An old version can be found in the poem "Reir Llorando" or "Laugh Crying," by Juan de Dios Peza. It begins:

Once, before a famous doctor, there arrived a man of somber demeanor. "I suffer," he said to him, "an evil as frightening as the pallor of my face."

The doctor of course suggests that he go see the great clown Garrick: "all who see him die of laughter," and "he has an astonishing artistic gift."

And the man replies:

And me, he will make me laugh?

The patient said, I will not recover thus: I am Garrick! Change my prescription.

Since that poem can be found here, the joke was already at least 100 years old when Alan Moore used it.

There's even a version that references a nonspecific "clown" from three years before Watchmen was published.

The disturbed man blurted out, "But Doctor, I am the clown!"

Each of us, even the clown, is subject to periods of depression and blues.

This also makes it clear that, even before Watchmen, the context was generally less humorous and more philosophic. So no snare drums.

It is worth noting that the word Pagliacci translates to "clowns," and thus may stand in for a generic clown.

It also is very likely a reference (direct or indirect) to the opera Pagliacci. In particular, the subject matter of Smokey Robinson and the Miracles' "The Tears of a Clown" is quite apropos and might have served as an inspiration:

I try to keep my sadness hid

Smiling in the public eye

But in my lonely room I cry

This is mirrored in the original opera. Canio plays the role of Pagliaccio, or "Clown," a clown in a circus. He has discovered his wife is with another man, and is "wracked with grief." In translation:

Perform the play! While I am racked with grief,

not knowing what I say or what I do!

Put on the costume, the powder and the paint:

the people pay and want to laugh.

And if Harlequin steals your Columbine,

laugh, Pagliaccio, and all will applaud you!

Change all your tears and anguish into clowning:

and into a grimace your sobbing and your pain...

Laugh, Pagliaccio, at your shattered love!

Laugh at the sorrow that has rent your heart!

(Grief-stricken, he goes out through the curtain.)

From this, Pagliaccio (or the similar Pagliacci) has become something of a cultural stand-in for the sad clown, the performer who weeps on the inside while making others laugh. As such, his is an obvious name to associate with the Grimaldi "joke."

It's been told about George Fox, "the American Grimaldi"— who sadly ended his days in an asylum, having been slowly poisoned over the years by the high levels of lead in his greasepaint.

One such story was told of George L. Fox, one of the great mimes and pantomimists. It was said that he went to a doctor to try to rid himself of a persistent case of depression. After an examination which disclosed nothing organically wrong, the doctor advised his patient to go and laugh at George Fox. The patient sadly answered, "I am George Fox."

The "Good Joke. Everybody laugh. Roll on snare drum. Curtains." is layered with irony, because the story here is not actually a joke, but a parable. Twisting a well-known joke into a parable that tells the reader more about the character of The Comedian is just one example of why Watchmen is so incredibly well written.

You see, the sad clown stories retold by Obie are jokes, because like all good jokes they contain a logical mixup and end on a strong punchline. Doctor tells a man to see a clown—man is a clown. These jokes, due in large part to how they are written, would get a laugh out of people in the real world—and you can tell they are all jokes because so long as you do not alter the mechanism/fundamentals of the joke, you can change much of the content and still end up with a funny punchline. For example:

A lonely man sits on a bench by a river, looking wistfully out at the water.

"Whats wrong with you?" says another man passing by. "I can't find love, no matter how hard I try." says the man. "Ridiculous!" scoffs the passer-by, as if by reflex. "Here, take these 2 gold coins and spend the night at the brothel down the road—that'll sort you out". "No good..." says the man on the bench. "I've been running that brothel for 14 years."

Same goes for a woman who constantly worries about her future, who is also a fortune teller, or whatever mental condition/service combo you can think of. These are all at their heart the same joke. But none of those would fit as a drop-in replacement for the story in The Watchmen because here there is a subtle difference. Pagliacci is not just sad - he is apathetic to life itself:

Man goes to doctor. Says he's depressed. Says life seems harsh and cruel. Says he feels all alone in a threatening world where what lies ahead is vague and uncertain. Doctor says, "Treatment is simple. Great clown Pagliacci is in town tonight. Go and see him. That should pick you up." Man bursts into tears. Says, "But doctor...I am Pagliacci."

This is a story of a man who sees life for what it is—harsh and cruel—which is emphasized by that action in the panels. The doctor tells him to go and see a clown, because although that provides no solution to his underlying condition, it will provide a distraction from harshness/cruelty of reality. But this idea is of no use to Pagliacci, because he cannot be distracted like the others by humour. He is the distraction.

And this all ties in to The Comedian's character, which is what Rorschach is trying to tell us with this story. He fights for justice because he couldn't be distracted like everyone else. That is his reason for being a superhero. If you now read the first two panels in light of the joke, it should be a lot clearer what Rorschach is trying to say, and why this is not a mere joke.

Rorschach isn't saying that the joke he just told is a good one, he's saying that Pagliacci is a joke to those around him, both on and off stage which reflects Rorschach's view of the Keene act. EVERYBODY laughs. The "punchline" that The Comedian was waiting for isn't traditionally funny... The punchline is that there is no escaping from the path he laid before himself, glad-handing and "performing" only to find it brings him empty smiles. In the same way, Rorschach is "in too deep" to sway from his extreme moralism now, so he too is forced to "put on the paint and costume" and perform his part. And as the curtain closes on the story's Auguste (The Comedian), the curtain opens for our Pagliacci (Rorschach).

The joke is also used in the 1928 silent film starring Lon Chaney Sr. as the clown Flik. He is afflicted with crying all the time while another man, also a patient of the same psychiatrist, is afflicted with uncontrollable laughter. The psychiatrist tells the laughing man that he needs to find someone worthy of his love, and when he loves her, the laughing will stop. And then he tells Tito (not knowing anything about Tito's private life ), that he needs to find something to laugh at, and points out the window to a poster on the side of a building of clown team Flik and Flok, and says "Flik makes everybody laugh. He will make you laugh too". And Tito responds "but I am Flik"

When I saw the movie, I immediately said to myself "I know that joke!" and sure enough, it was from Rorshach that I had first heard it.

The joke is even older and dates back at the end of the XVII century, when jokes about the great doctors of France were in fashion. Protagonist is an actor of the italian "Commedia dell'Arte" who in life plays the role of Arlequin. Same developement as above.