Are there faster dead men?

The Flash's title is "The Fastest Man Alive." 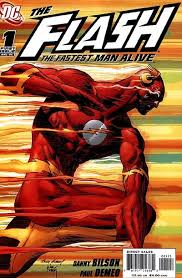 The modifier "Alive" implies that there was at least one faster man, but he is no longer alive.

In the main comic continuities, are there men faster than the Flash who died some time in the past?

"Fastest man alive" allows for the possibility that there used to be a faster man, but it doesn't imply that there ever was a faster person. - reddit (emphasis added)

The Fastest Man Alive appears to be an alternate name/title for The Flash, and is not meant to imply definitive speed prowess(ɤ) of those either living or dead. His other two titles are The Scarlet Speedster and The Sultan of Swoosh (possibly only from The Joker).

This can be implied by the titling The Flash: The Fastest Man Alive.

In books and other works, a subtitle is an explanatory or alternate title. Wikipedia - Subtitling ɫ

In Earth 2 and other places, it is referenced as a title or distinction.

After the events of Crisis on Infinite Earths where Barry Allen was killed, Wally took over as the Fastest Man Alive. - Wikipedia: The Flash

ɤ Guinness has yet to collaborate The Flash's claim.

27
Can the Flash run faster than light?
15
What would the Flash's tracks look like in damp sand?
9
Can The Flash think faster?
7
How fast is Barry really at the beginning of the Flash 2014 TV series?
12
Is Green Lantern faster than Flash and Superman?
10
First instance in the comics of The Flash's trailing lightning as literal rather than a visual effect?
96
Has an injured Flash ever used super-speed to walk on his hands?
14
Does the Flash have use for a computer/programming and if so how does he deal with their slowness?
6
What makes The Flash the fastest man alive?