Early in the film, Judy boards a train to Zootopia after being accepted into the police. On the way, we see a sign indicating you are leaving Bunnyburrow which includes a real time population counter.

Even earlier in the film, her mom indicates Judy has "275 brothers and sisters". (!)

Also, based on the fact that she was scratched by Gideon when she was 9, and that she entered ZPD academy 15 years later, we can reasonably conclude she is at least 24 years old for most of the film. Although we don't have her parents' ages we can assume they are much older.

Finally, based on the advanced technology demonstrated, including medical technology as evidenced by the equipment in the hospital re-purposed by the wolves, we can assume a very low childhood mortality rate.

Given this information, how accurate is the rate of increase of the population counter for Bunnyburrow? If it isn't accurate, what would be a more realistic rate of change? Finally, can anyone attempt to estimate a "carrying capacity" for Bunnyburrow (which is implied to be a small rural area)?

You'll probably have to make some assumptions, but supporting with evidence from the film is preferable obviously.

And yes, I understand the rabbit population is played for laughs throughout the film, I still think it deserves analysis.

This seems to be a hangover from the film's early drafting. The Bunnyburrow was originally intended to be an (ironically cutely-named) "mega-suburb" with a population into the tens of millions. Judy would have been just another faceless bunny in a veritable sea of semi-identical bunnies, all going about their business. Over time the story changed, but the schtick about bunnies being prolific breeders seems to have remained because, well, it's funny.

Bunnyburrow is a suburb on the outskirts of Zootopia, full of rolling fields and farmland. It’s home to the bunnies, including the Hopps family. In earlier versions of the story, Judy was one of many bunnies in a family so large her father didn’t even know her name, so the Bunnyburrow was designed to be a bit faceless as well. When the story evolved, so did the Bunnyburrow, becoming less of a massive mega-suburb and more of a perfect little small town, which Judy leaves behind to follow her dream of becoming a cop in Zootopia.

The Art of Zootopia

You can also see how "The Burrows" were originally conceived by the filmmakers in this early concept art. 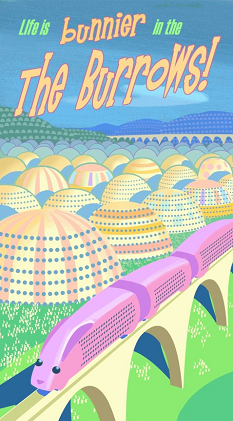 “They’re animal environments mashed up with a human equivalent. Sahara Square is the desert plus Dubai, with lots of Moroccan architecture. The Rainforest District feels like the jungle plus Southeast Asia. Tundratown has a Russian feel,” Bush enthuses. “And the bunnies dwell outside of the city in endless suburbs, because they need room to expand.” Howard laughs. “I love every district for different reasons. I wish we could spend more time in each one, to explore even more in this Zoo-niverse.”

The Art of Zootopia

As to how they manage to limit rabbit numbers in the city, the answer is quite simple. 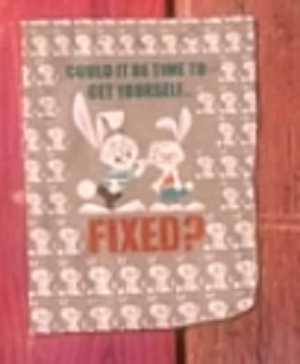 3
Is the 10:1 prey:predator ratio touted in Zootopia inconsistent with what the film portrays about prey reproduction rates?

48
What do the carnivores eat in the Zootopia universe?
1
Are there any marine mammals in the world of Zootopia?
1
At the end of Zootopia, are Nick Wilde and Judy Hopps an item?