Are there any marine mammals in the world of Zootopia?

The world of Zootopia is one where mammals have evolved to the point where they can peacefully co-exist with one another.

Excluding otters and hippos, are there any large marine mammals (e.g. whales, seals, dolphins) in the film? And if not, why not?

The Disney Wikia has a full list of all animal species that appear in Zootopia. I'm not going to copy it here since it's ridiculously long, but suffice it to say that (bold emphasis mine):

According to Disney, the only mammals that do not appear in Zootopia at all are primates (monkeys, apes, and lemurs), domesticated dogs and cats, and marine mammals (whales, dolphins, pinnipeds, etc). This may have been due to the fact that Disney considers primates too similar to humans, dogs and cats too domesticated (though dingoes (descendants of dogs gone feral) are featured in the book The Stinky Cheese Caper), and marine mammals too difficult to accommodate in the setting.

We can see some of the film-makers' motivation in making this decision in this interview with Andrew Millstein, President of Walt Disney Feature Animation (emphasis mine):

BS: From what I have seen, there are no reptiles or birds in the movie; it was mammals except for humans and apes. Was there a reason for cutting out other species?

AM: From Byron and Richs’ perspective they just wanted to limit the scope of the world and they had to make a choice and they handled it that way. But you are right, the reptiles and birds are not there. It was just an issue of ‘where do you draw the line?’ Essentially, for the characters it made the most sense for the story.

The same reasoning could be used to explain the absence of marine mammals as well as reptiles and birds. See also the following image tweeted by the director, Byron Howard: 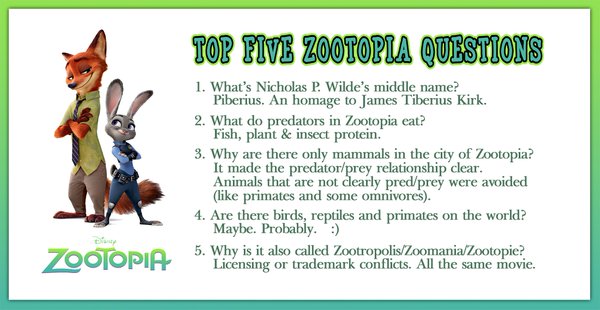 Thanks to @Valorum (the OP) for help finding the above interview and image.

48
What do the carnivores eat in the Zootopia universe?
1
At the end of Zootopia, are Nick Wilde and Judy Hopps an item?