What's the fate of Coruscant in Star Wars: The Force Awakens?

If the new planet for the Republic is the Hosnian system, then what happened to Coruscant? Is it now an abandoned planet, a planet full of crime, a wasteland or still part of the Republic? Is it now a separate planet?

Coruscant is still part of the (New) Republic. It was represented by the Senators Arbo and Orris Madmund as of about six years prior to The Force Awakens. The timeframe is established by the fact that these characters are mentioned in the novel Bloodline and by this tweet:

Wookieepedia's article on the New Republic contains a lengthy section on the period between the Battle of Endor and the end of the war between the Empire and the Rebel Alliance; there is no mention of Coruscant in any of the battles in that timeframe, so presumably Coruscant was not damaged by the war and looks similar to how it did when the people of Coruscant celebrated the Empire's defeat at the Battle of Endor:

With the Galactic Civil War concluded, the New Republic sought to reshape galactic politics in an effort to prevent the abuses of the Old Republic and to bring in the disaffected worlds that had ceded from the Republic prior to the Clone Wars. It was decided by the Senate that all worlds would have an equal say in their government, in which member worlds such as Chandrila and Hosnian Prime would host the Republic's capital on a rotating basis rather than Coruscant alone.

At the height of the New Republic, twenty years after its establishment, Coruscant was represented by Senator Arbo, a member of the Centrist faction and a notorious war hawk, and junior senator Orris Madmund. 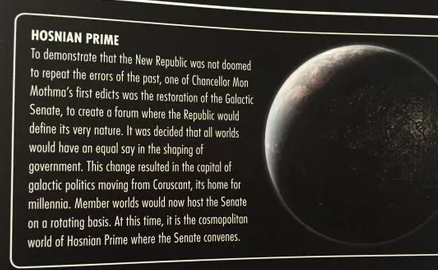 13
Why did the Sith Empire propose the “Treaty of Coruscant” after capturing Coruscant?
8
How did the New Republic gain control of Coruscant?
4
Why didn't the First Order mobilize their fleet to protect the base right before they used the weapon in “The Force Awakens.”
3
What is known of the status of the New Republic fleet at the end of The Force Awakens?
11
Did Luke attempt to retake the Jedi Temple on Coruscant?
3
Does Coruscant still have an affiliation with the New Republic?
9
What's happened to Wedge Antilles in the Sequel era?
3
Why were Jakku and Hosnian Prime invented instead of setting the action on Tatooine and Coruscant?