I am trying to remember a story I read many years ago - early 90s I think - featuring a small family travelling on a spaceship, which I remember being called "dragonball", but I suspect that might be wrong as googling for it only finds "dragonball z", so I've probably just totally forgotten the name.

The story featured them landing on a planet occupied by anthropomorphic rabbits, racially segregated by fur color (black and white). Their society was governed by a computer designed to favour the greatest good for the greatest number, which caused it to to attempt to exterminate the slower breeding (less-populous) variant. The visitors solved this by convincing the gray-furred rabbits, who lived outside the computers control, to register themselves. As the number of gray rabbits was greater than either of the others, this somehow something something something and so the computer stopped trying to kill anyone, cue happily ever after.

Any idea what the book was? 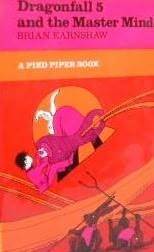 Dragonfall 5 is about a family (presumably British) - Tim, Sanchez, Old Elias and Big Mother - living in a nondescript part of the 3rd millennium, travelling along various planets in their aging, nearly obsolete spaceship called the Dragonfall 5. They transport goods, passengers and other items to a variety of worlds. As well as the four humans, their crew includes a pet dog called Jerk, who is a breed of flying hounds who can glide using his long ears. They also have several small rodent-like animals called Minims. They always work in groups of three, and can jointly translate most alien languages. In the Royal Beast there were at least six Minims on the ship.

Dragonfall 5 and the Master Mind (1975): Its climate system expertly managed by a Super Computer, a planet of rabbits is puzzled by the sudden flooding that has broken out. Dragonfall 5 is hired to ship grain to the rabbit clans, split into White and Black tribes, but Tim and Sanchez will be required to travel deep into the flooded tunnels to seek out the Master Mind for answers.

4
Looking for a comic book about space travel and a royal family
9
Story involving young female space travelling escapee with multiple personalities
9
1980s sci-fi book club trilogy about a rich, space-faring multi-generational family
9
Sci-fi book about this girl with purple hair and some others travelling into space
5
Young adult/childrens novel about magical tree thats poisoned, where magic is damaged by computer use?
5
Sci-Fi short story about a woman travelling through the solar system?
19
Short story about protagonist and others 'time-travelling' forward as statues
17
Story identification - Childrens' Sci-Fi circa 1980s