Are there any Australian characters in Star Trek?

I've noticed we have quite a diversity of cultures throughout Star Trek canon, but I can't recall any characters who were (in-universe) from Australia. Are there any Australian characters in Star Trek?

The Star Trek transcripts at Chakoteya.net mention only one fictional character from Australia. Any Terrans with unspecified places of birth could potentially have been born in Australia, but there’s no way to know for sure which ones.

Hoshi Sato had a pen pal from Brisbane. From the transcript to the Enterprise episode, “Dear Doctor”:

Hoshi: I had a pen pal once when I was twelve, from Brisbane, Australia, and I loved getting her letters. It was like this little window into distant places with strange sounding names.

Her pen pal presumably would have been born around the year 2129, the year that Hoshi was born.

There could be any number of real-life Australians who are known to exist in the Star Trek universe. Only one such person’s place of birth was mentioned in a script:

Errol Flynn, a real-life actor from Australia, was mentioned in the Deep Space Nine episode, “Past Tense, part II”. From the transcript:

Biddle Coleridge: Errol Flynn was born in Tasmania. Look, you guys go where you want and I’ll go where I want, all right?

The Australian Aborigines were mentioned in the Voyager episode, “Waking Moments”.

Australian actor Wendy Hughes used her own Australian accent when she played Lieutenant Commander Nella Daren in Next Generation Season Six, Episode 19, so I just assumed her character was also Australian. 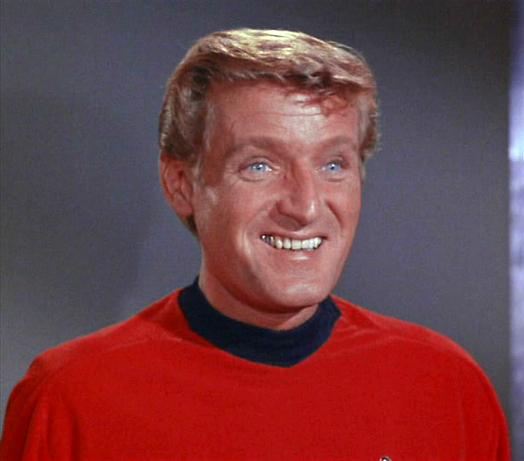 While it is not established on-screen, and the canonicity is dubious:

Kyle was born on Earth. According to the comic book "Who's Who in Star Trek 1", he was born in Adelaide, Australia and his father was a sales representative for one of Earth's largest transportation companies. The novel Traitor Winds established his birthplace as Sydney, Australia.

However, there are contrary citations:

For the Animated Series, he had a mustache and was voiced by James Doohan. The script for "Beyond the Farthest Star" mentioned that the character had to be voiced with a British accent.

The video game Star Trek: Starship Creator mentioned that he was born in Sheffield, England in 2241.

Other characters appearing only in licensed novels or video games originated in Australia: Tricia Cadwallader, Lester Foster, and Galarrwuy Nayingul.

Not the answer you're looking for? Browse other questions tagged star-trek characters or ask your own question.