What was the device used to knock out Hank and the others?

After the explosion at the mansion, Stryker arrives and orders one of his men to use what looks like an oversized megaphone to knock out our friends.

What was this device?

As there's no description (yet) of said device, perhaps something similar was used in the comics?

The device appears to be a "stun gun" (not very helpful I know). Free lance artist Bartol Rendulić posted some concept art of the weapons online. I can't actually find any direct proof that Bartol did indeed work on X-Men: Apocalypse but the weapon in question does match the concept art posted by Bartol (that's not direct evidence in itself as it could have been drawn afterwards).

However, compare the device shown in the film and the concept art below. 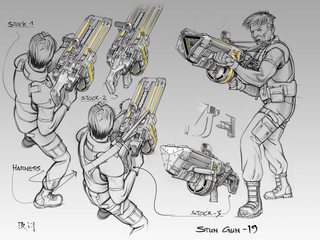 If this is indeed actual concept art for the film there is also a small discrepancy with it, in that the concept art shows it being used to fire stun disks rather than shooting a sonic pulse of sorts. 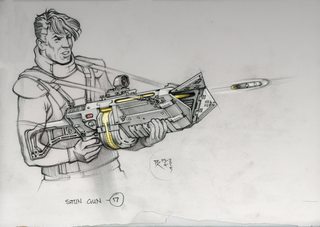 It's also worth checking out the link with the full concept art as it gives designs for a smaller model and a handheld pistol version that fires darts.

I can't find any comic inspiration for the device and can't source what is mentioned in this answer so it may have been designed solely for the film.

Not the answer you're looking for? Browse other questions tagged marvel x-men x-men-cinematic-universe x-men-apocalypse or ask your own question.

21
Did Chris Claremont have to change his long-term plans for the X-Men in the early '90s?
13
Uncanny, Astonishing, Ultimate and Legacy…How does this tie in with X-Men?
25
What was Wolverine doing during X-Men:First Class?
1
How did Hank Pym get out of the ocean?
11
Did Bryan Singer make up the idea that Magneto's helmet blocks telepathy?
4
What passage from The Once and Future King does Professor X read?
5
Old X-Men comic where team travels to alien world with a ring-like sun that needs recharging?
3
Does MCU Infinity Gauntlet with Stones/Gems operate differently than the comic book version?