Did Starfleet ever have an Enterprise-class of starship?

The Star Trek series has many different classes of star ships featured in the shows and movies. Some examples include: Constitution-class, Galaxy-class, Excelsior-class, Intrepid-class, Defiant-class and Sovereign-class. But never have I seen or heard reference to any Enterprise-class ships.

Starfleet ship classes are usually named after the first prototype vessel of that class made; i.e. the first Galaxy-class vessel would have been named the USS Galaxy. And as prototype vessels usually have NX- designations that leads me to believe that the class of ships seen in the show Enterprise would be of an Enterprise-class, if the design was ever put into production. But as far I am aware that never happened in canon and the NX-01 Enterprise was referred to as a NX-class ship on the show.

To sum up then, has Starfleet ever had an Enterprise class of star ship?

No, not in canon.

In canon, there has never been an Enterprise-class starship in Starfleet.

But a lesser-known fact is that the decision for the Enterprises NCC-1701 and NCC-1701-A to be "Constitution class" was not made until 1987. Before that time, no class designation was given in dialogue in TOS or the films before that year. Prior to 1987, both "Starship class" and "Enterprise class" were used informally amongst Star Trek creative personnel to describe the original Enterprise, and "Starship class" appears on the bridge dedication plaque on the NCC-1701. ("Enterprise class" was specifically floated by Andrew Probert for the refit Enterprise in The Motion Picture, but this idea was dropped.)

Also, in the original script for The Wrath of Khan, the Reliant was described as "Enterprise class", and indeed the ship was intended to be a copy of the Enterprise. However, it was decided at the design stage to fundamentally change the shape of the Reliant in order to better distinguish the two ships in battle. Later, the Reliant was retconned as "Miranda class".

For a history of the complicated evolution of "Constitution class" from "Enterprise class", with reliable citations and direct quotes by Enterprise designer Andrew Probert, see here.

For a moment, the screen showed nothing but a scan of stars, fading into faint nebulosity in the background. Then, suddenly, the strange ship was there. Superficially, it looked much like an Enterprise-class starship; a domed disc, seemingly coming at the screen nearly edge-on- though of course it was actually approaching the satellite, not the Enterprise. Its size, however, was impossible to guess without a distance estimate.

Obviously this conflicts with later (TV) canon that indicates that the ship is 'Constitution-Class', but at the time there was no reason to assume this was not correct.

Similarly, the Star Trek RPG (FASA Ship Recognition Manual) makes extensive reference to an "Enterprise Class". This was, however corrected in later versions when the main canon conflicted with their interpretation. 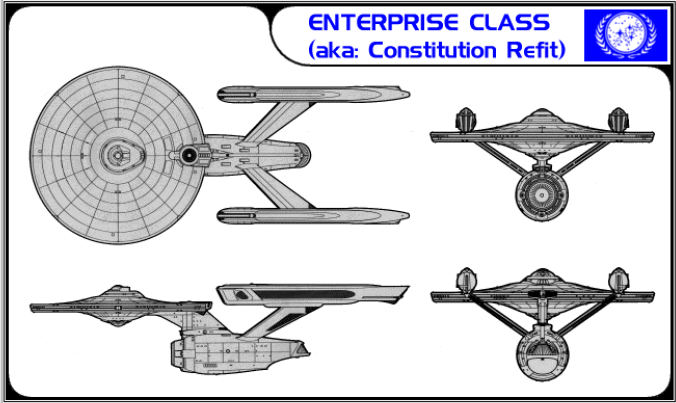 34
Were there REALLY over 73,000 Federation starships commissioned?
15
What is the purpose of the Captain's Yacht on some Federation starship classes?
37
Why was the Defiant so small?
36
Nacelles: if two are better than one, then why are three not better than two?
12
What is the first non-Constitution class Starfleet ship we see in canon?
17
What was the expected period of service for a ship in Starfleet?
2
Differences between Enterprise and Defiant in DSC
7
What ship class is the USS Archimedes?