Who was the candy man Riff Raff was expecting?

How d'you do?
I see you've met my
Faithful handyman.
He's just a little brought down, because
When you knocked
He thought you were the candy man.

Was Riff Raff really expecting a candy man? If so, who?

In case anyone needs a refresher, here it is, about a minute in.

I know that "candy man" is slang for a drug dealer, but was Riff Raff expecting one?

Was Eddie, the "delivery boy", their drug dealer, about to make a "delivery"? Is that why Columbia thinks of him when "they're all lucky", and is that why he bursts in later?

"Candy man" is a common slang expression or euphemism for a drug dealer, so apparently Riff Raff was expecting - or hoping for - a delivery.

TL;DR: We don't know, but there is reason to believe there was no "candyman".

Most of the information we get from Frank during the song is dubious at best.

How do you do
I see you've met my faithful handyman

Probably false. Riff-Raff is the butler and lieutenant, not a handyman, and although Frank probably doesn't know it yet, he's treacherous, not faithful. He'll murder Frank within hours.

Don't get strung out by the way I look
Don't judge a book by its cover
I'm not much of a man
by the light of day
But by night I'm one hell of a lover
I'm just a sweet transvestite
From Transsexual, Transylvania

He is a transvestite from Transsexual Transylvania, but he's narcissistic and possibly sociopathic, and certainly not "sweet".

Let me show you around, maybe play you a sound

Frank never shows anyone around the mansion, and although there is plenty of singing, no one ever plays a recording.

No, Brad and Janet are total dorks.

They never watch a movie.

Brad
I'm glad we caught you at home.
Could we use your phone?
We're both in a bit of a hurry.

Not really relevant here, but Brad is lying, too. Brad and Janet are on their way to see Dr. Scott, but Dr. Scott has no idea they are coming, so they aren't in a hurry at all. They just want to leave because they're dorks.

Brad
We'll just say where we are
Then go back to the car
We don't want to be any worry.

Frank
You got caught with a flat
Well how 'bout that?

No one has told Frank that Brad and Janet's car has a flat. Frank's smirk here suggests that he set up some sort of obstacle on the road specifically to cause a flat tire.

Well babies, don't you panic
By the light of the night
It'll all seem alright

No, it won't seem alright - everything is going to seem bizarre and awful.

I'll get you a Satanic mechanic

Frank never even attempts to get them a mechanic, satanic or otherwise.

Why don't cha stay for the night?

Frank Or maybe a bite

So come up to the lab
And see what's on the slab
I see you shiver with anticipation But maybe the rain
Is really to blame
So I'll remove the cause
But not the symptom
- The Rocky Horror Show: The Musical, by Richard O'Brien

Out-of-universe, Frank says "candyman" because it rhymes with "handyman". In-universe, he may be talking about a drug dealer, or a guy who sells candy, or he might be lying. We just don't know.

If the candyman is a drug dealer, it's not clear what kind of drugs he's supposed to bring, or who the buyer is. We do see a roach in the Zen Room: 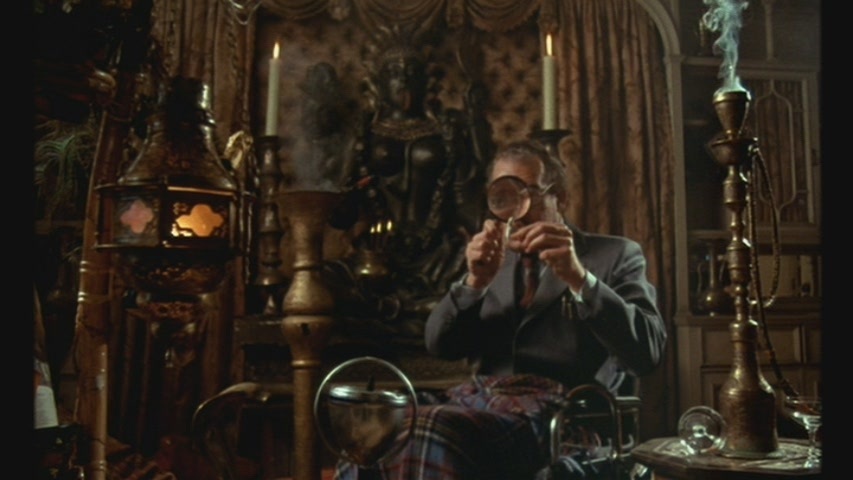 But we never see anyone do drugs. We only see the residents of the Frankenstein Place consume intoxicants twice - Riff-Raff swills champagne on the way to the elevator, and Frank sips some wine during the toast before dinner:

It specifically references this line in Rocky Horror as an example, as well as offering other contemporary sources such as Robert Wright Campbell's "Juice"

As to why they were expecting his arrival, it's most likely that he would be a regular feature on the party circuit.

"Candy man" is a common, period reference to a drug supplier.

Because it's a decadent mansion this "candy man" reference provides the subtext of raw hedonism and abandon without needing to show junkies shooting up on the staircase.

The passing reference to it, as opposed to a blatant "oh look at this we do drugs" tight focus, is another technique to place hedonism as casual in the environment and not the be-all-end-all.

The reductio ad absurdum argument that because no one specifically says "HEY THE COCAINE IS HERE FOR YOUR TO SNORT OFF HOOKER BOOBS" we cannot know what was implied by "candy man" is grasping at best and willfully ignorant of the time period and culture the story was set in.

Not the answer you're looking for? Browse other questions tagged rocky-horror-picture-show rocky-horror-show or ask your own question.