This was a young-adult book, paperback, I'm pretty sure. I read it somewhere between 1986 and 1990 in my elementary school, although it might have been older than that. There were a series of short stories, each of which asked the reader to solve an aspect of the stories. Unfortunately, only two stories have stuck with me, only one of which I remember clearly the ghost aspect.

At least two boys (there might have been more) come upon a house, which they decide to explore. They found a room with plates and cutlery set out as if for a meal long-deserted. There's a thick layer of dust and webs indicating that it had abandoned for some time. One of the boys picks up an item from the table, then immediately shouts for his companion to leave with him. I don't remember if something actually pursued them, but outside, the second boy asks how the first boy knew of the danger.

The answer was that, when he picked the item up, it was still warm, as if someone had been holding it shortly before the boys entered. In retrospect, it might have also been candle wax that was still warm... but the hint was indeed the warmth indicating recent usage.

For some reason, part of me wants to suggest that this story was re-used for some kid investigators, maybe The Three Investigators, with the implication being that the building held mundane criminals, but that might be a false memory.

The second story had a family entertaining a ghost inspector. They said they'd had a number of strange incidents, things being moved, odd sounds, including a piano being played in the living room. There was an illustration of an overhead view of the living room. The inspector quickly dismisses their claims, giving reasons why there might have been strange noises, and concluding that their cat must be the source of the piano playing. After he leaves, the piano starts playing again and the family discuss how the inspector didn't even stay to hear the important detail to prove he was wrong about his conclusion.

Namely, the overhead view shows the fact that there is no piano in the room.

Solve It Yourself - Ghost Story Mysteries 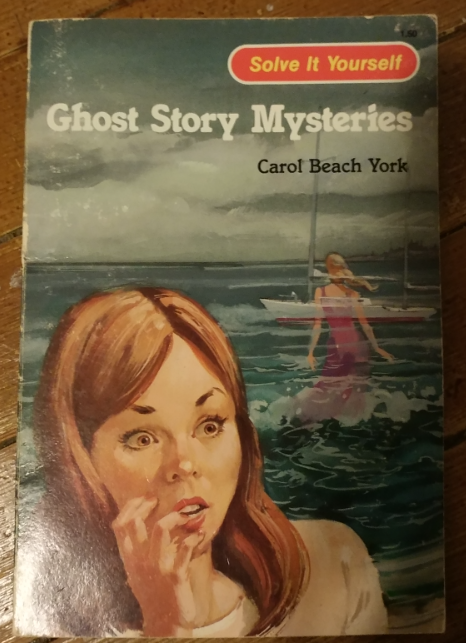 This is a collection of short mysteries by Carol Beach York.

The two stories mentioned in the question are most likely “The Yellow House” and “The Living Room” respectively.

Not the answer you're looking for? Browse other questions tagged short-stories story-identification or ask your own question.

5
Movie (or TV show) story with haunted house and organ playing
8
Collection of scary stories for children: boy changes into a bat at night, girl sees a horse's ghost
4
Collection of ghost-stories for children/young adult
29
Story about aliens playing God, deciding they are overwhelmed, and leaving
7
Seeking SF Short Story from late 1970s/early 1980s about dystopian future with an old man playing a piano
7
Short story about a planet with a religion of fantastic stories
6
Short story collection. Only remember part of two stories. One dealing with a war and one dealing with pollution
3
BL Manga where a depressed musician falls in love with a ghost in his apartment and starts playing for him again [bittersweet ending]
20
Looking for a collection of stories about an isolationist community