Do the children of clones age more rapidly in Star Wars?

Boba Fett had a child in Legends. Since clones age more quickly than normal humans (at least Kaminoan clones do), if a clone has a child with a non-clone human, is there any Legends example of the standard lifespan of the offspring of a human and human clone?

If there's Disney canon, that's welcome too, but I doubt it.

The clone commando RC-1136/IC-1136 "Darman Skirata" had a son named Venku Skirata by the Jedi Etain Tur-Mukan. There was no mention of Venku aging faster than normal. Furthermore, he was born in 20 BBY (at the end of the Clone Wars, as established by the Republic Commando/Imperial Commando series) and was still alive in 40 ABY (in the Legacy of the Force series). He was therefore alive for at least 60 years, which would make him biologically 120 years old if he aged at the same rate as the clones. Thus it is safe to say that the children of the clones aged at the normal rate.

I am not aware of any clone who fathered a child in canon. The clones apparently believe it is possible for them to have children, but it is forbidden:

CT-7567 Captain Rex: If we fail, then our children and their children could be forced to live under an evil I can't well imagine.

Former clone trooper Cut Lawquane: If you were to have children, of course, but that would be against the rules, wouldn't it? Isn't that what somebody programmed you to believe, Captain?

Note that Pablo Hidalgo of the Lucasfilm Story Group has confirmed that Cut Lawquane adopted the children of the Twi'lek he married: 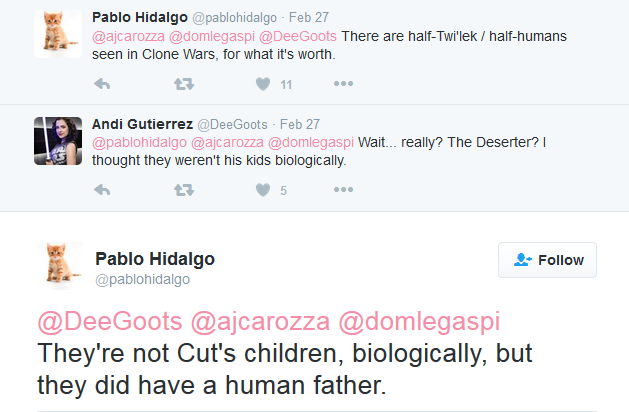 Since the children are not Cut's biological children they are not useful in answering your question.

There's none that I know of. Relevant information:

There were early claims that Dolly the sheep had pathologies resembling accelerated aging. Scientists speculated that Dolly's death in 2003 was related to the shortening of telomeres, DNA-protein complexes that protect the end of linear chromosomes. However, other researchers, including Ian Wilmut who led the team that successfully cloned Dolly, argue that Dolly's early death due to respiratory infection was unrelated to deficiencies with the cloning process. This idea that the nuclei have not irreversibly aged was shown in 2013 to be true for mice.

We can but surmise that genetic engineering was employed to facilitate the 'production' of clones.

Spaarti cloning cylinders were devices used for the creation of personal clone armies by those wealthy and/or well-connected enough to acquire them. To create clones from Spaarti cylinders was the fastest known form of cloning.

Kaminoan cloning had a single clone grown safely at maturity in ten years. With a Spaarti cloning cylinder, a fully-mature adult Human could be grown in a staggeringly quick one standard year.

However, Kaminoan cloning was much more effective, for ten years of growing in constant learning and training resulted in creating perfect warriors despite the long wait. Spaarti clones did not receive any training, instead they had their personalities formed by a process known as "flash memory", which involved writing the memories of another person to a fresh clone's brain.

Spaarti clones grown in less than a full year had the dangerous side effect of possible clone madness. However, Thrawn discovered that using ysalamiri to cut off the clone's connection to the Force would enable the creation of the clone within 15 to 21 standard days.

... and largely alleviates any instances of Clone Madness.

Star Wars Episode II: Attack of the Clones revealed that Boba Fett is an unaltered child clone whom Jango Fett raises as his son.

Boba Fett was not genetically altered and therefore will not age prematurely. He is simply: "a genetic clone of his 'father'." –starwars.com

Not the answer you're looking for? Browse other questions tagged star-wars star-wars-legends clones or ask your own question.

19
Were the Jedi ever publicly accused of exploiting the clones?
9
What happened to new clones after the rise of the Empire?
21
Was anyone else suspicious of the sudden convenient appearance of a Clone army?
23
When and how does the Emperor learn that Luke is Vader's son?
5
In Star Wars, why do clones not grow facial hair in their growth-tanks?
8
How much official communication was there between the Senate and the Jedi Council?
2
How are the clones created in Star Wars
3
How could the clones ever keep up with droids, especially in space dogfights?
10
How was Jango Fett chosen?