What exactly are the "Magic Fountains"?

In the 2003 video game Prince of Persia: The Sands of Time, the player can increase their maximum health by drinking from the "Magic Fountains", ten of which are scattered throughout the game: 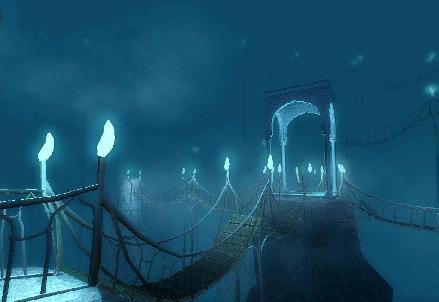 As a gameplay mechanic, they're pretty standard. In-universe, however, they're baffling:

I'd be willing to accept the notion that these are hallucinations, if not for Farah's reaction. So, my question: what (and where) are these Magic Fountains?

Note that I'm looking for canonical evidence only: statements from people involved in the game's creation, or from licensed materials.

The game manual describes them as "Magic Fountains" (confirming their magical nature. It also notes that they might not actually be real...

The Prince can never be sure whether Magic Fountains are real or a figment of his imagination. One thing, however, is certain: Each time you drink from a Magic Fountain, it will permanently lengthen your life bar.

The official gameplay guide offers very little extra info other than confirming that they're mysterious and powerful and that their mystery is only exceeded by their power.

There are many baths and fountains throughout the palace that can be used to refill the Prince's Life Bar. However, none are as special as the Magical Fountains. To find one, always be on the lookout for something that just doesn't seem right. Perhaps it's a cracked wall or a ladder leading someplace out of the ordinary. Regardless, explore the mysterious hallways that lead off the beaten path, as they will lead across a series of rope bridges to a Magic Fountain. The Magic Fountain replenishes the Prince's Life Bar and extends it as well!

17
What are the Elder Scrolls?
5
Who and what are the Prime Evils?
7
What are the clues that could indicate who are Chell's parents?
2
How come the Kong family are resistant to Tiki magic?
10
Five kids are sucked into video game and must retrieve a vial to save the creator's dying daughter
3
How does the dagger work in Prince of Persia
11
What exactly happened to GLaDOS after Portal?
10
How exactly did the Traveler originally assist humanity?