Why does General Grievous have blue and green lightsabers instead of a red lightsaber?

In Revenge of the Sith, General Grievous has four lightsabers. Later on in the film, we see him use those lightsabers when he fights Obi-Wan and there's not a single red lightsaber - just 2 blues and 2 greens. Are they trophies?

The lightsabers are indeed trophies taken from Jedi.

Grievous provided a not-so-subtle hint that the lightsabers he carried with him were trophies when he encountered Obi-Wan and Anakin on the bridge of the Invisible Hand near the beginning of Episode III:

OBI-WAN, ANAKIN, PALPATINE, and ARTOO are captured by GENERAL GRIEVOUS. They stand before the ALIEN DROID GENERAL.

GENERAL GRIEVOUS: Your lightsabers will make a fine addition to my collection. 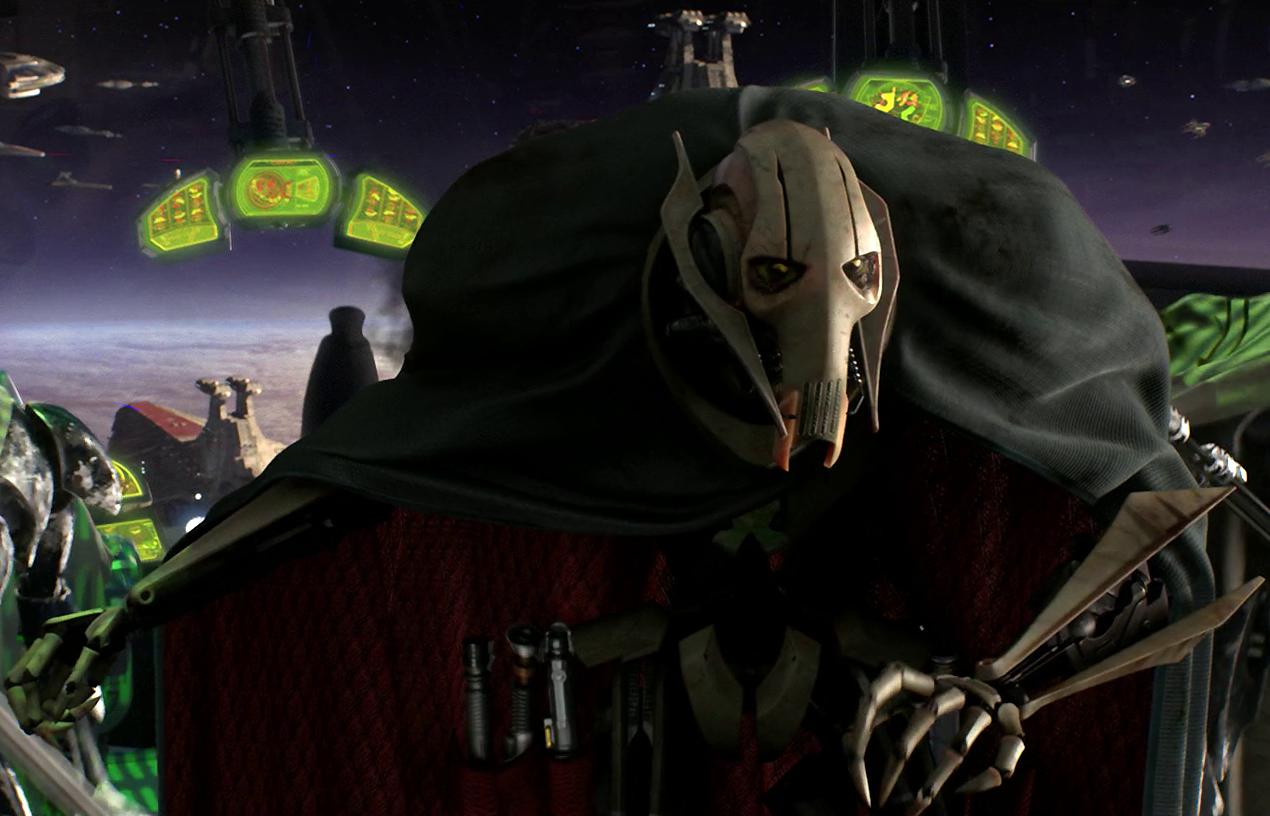 Since he carries around a collection of lightsabers from Jedi, it's no surprise that the lightsabers he uses have the Jedi blue and green colors.

Grievous isn't able to craft his own lightsabers and has to settle for taking them from the corpses of his Jedi opponents as trophies. This explains their colours.

We have confirmation from the Lightsabers: A Guide to Weapons of the Force factbook that the four lightsabers belonged to various Jedi masters that Grievous had defeated; Shaak Ti (which he took from her in in a deleted scene), Eeth Koth, Pablo-Jill and Roron Corobb. 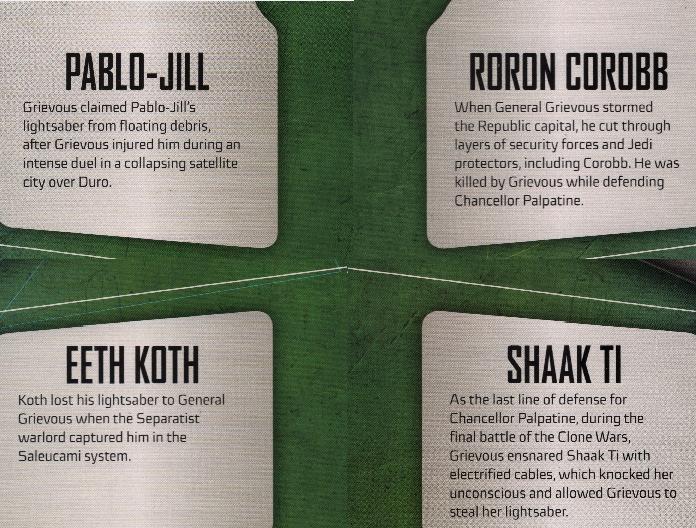 Pablo-Jill
Grievous claimed Pablo-Jill's lightsaber from floating debris, after Grievous injured him during an intense duel in a collapsing satellite city over Duro.

Roron Corobb
When General Grievous stormed the Republic capital, he cut through layers of security forces and Jedi protectors, including Corobb. He was killed by Grievous while defending Chancellor Palpatine.

Eeth Koth
Koth lost his lightsaber to General Grievous when the Separatist warlord captured him in the Saleucami system.

Shaak Ti
As the last line of defense for Chancellor Palpatine, during the final battle of the Clone Wars, Grievous ensnared Shaak Ti with electrified cables, which knocked her unconscious and allowed Grievous to steal het lightsaber.

First, as commonly discussed, the lightsabers are taken from the Jedi he captures or kills. In the deleted scene in RoTS, before Anakin and Obi-Wan find Palpatine on the ship above Coruscant, they run into a bunch of Federation droids with Grievous and another Jedi named Shaak Ti. Shaak Ti says, "Forgive me, Master Obi-Wan. I have failed," and then she's killed with her own lightsaber by Grievous. And Obi-Wan and Anakin say "You've just made a big mistake." Later, when the two Jedi are captured along with Palpatine. Grievous says "Your lightsabers will make a fine addition to my collection," and we see a couple of other lightsabers in his cloak, one of which we know is Shaak Ti's. So since the lightsabers he has are trophies from defeated Jedi, they would obviously be in the colours the Jedi commonly use: blue and green.

The other reason is more in-depth. Why does he need to take lightsabers in the first place? Because he can't make one of his own. Why can't he make his own red lightsaber? Because he was never a Jedi or a Sith. He did say, before he fought Obi-Wan on Utapau that he had been trained in the Jedi arts by Count Dooku. However he says "Your Jedi arts", which means he isn't one of them, meaning Obi-Wan and Dooku, who are Jedi and Sith respectively. It is noted that only Sith or Jedi can make their own lightsabers, and it is considered the final test of a Jedi to be able to construct one of their own, as implied by Vader's statement to Luke on Endor in RoTJ: "So I see you have constructed a new lightsaber. You're skills are now complete."

Yes, they were trophies acquired from the Jedi.

In fact, the first blue lightsaber was taken from Master Sifo-Dyas by Count Dooku himself, and later handed over to Grievous as a gift. Wookieepedia states:

Once Grievous' transformation into a cyborg had been successfully completed, Dooku gave him the very special gift of Master Sifo-Dyas' own lightsaber. 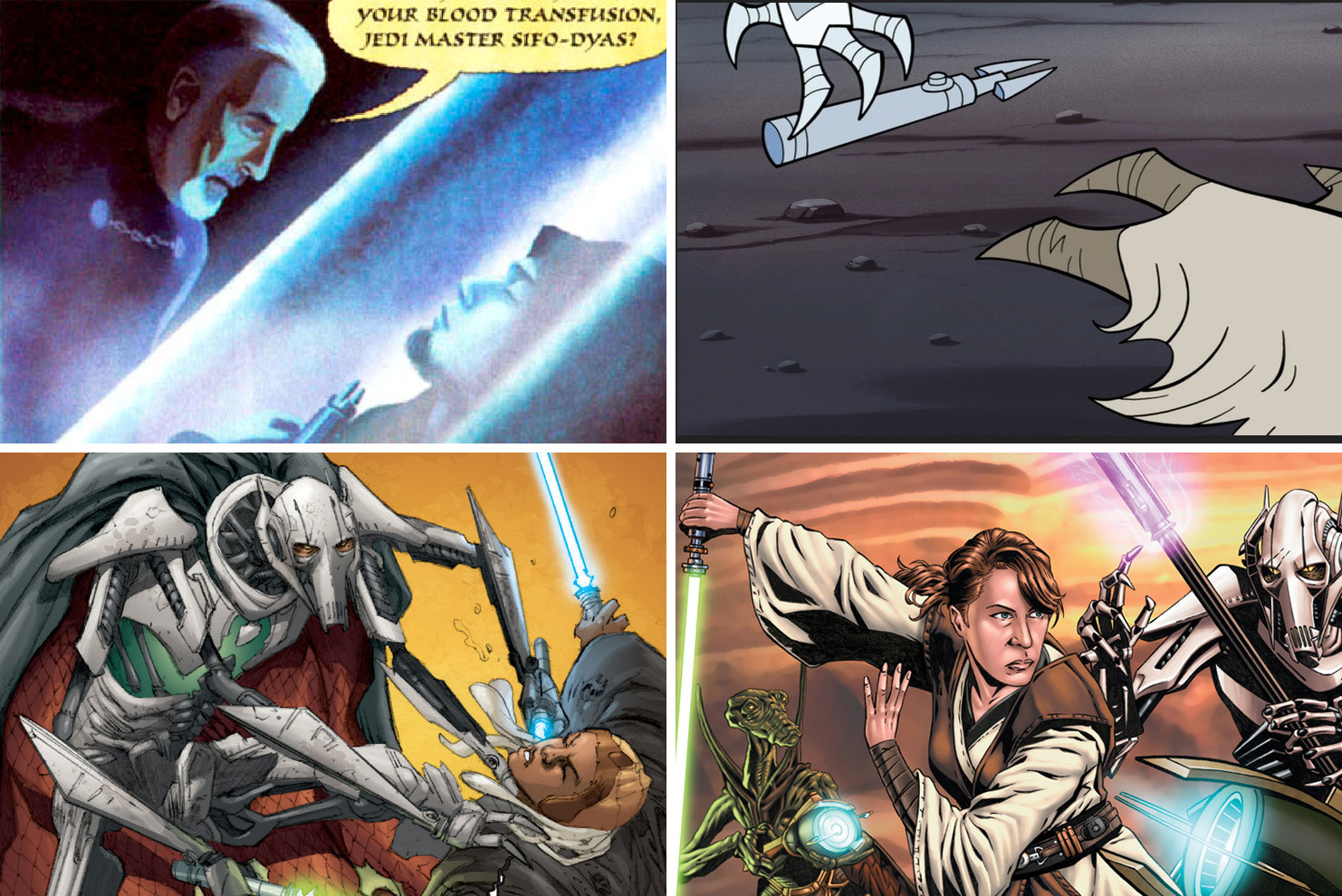 The green lightsaber was stolen from Master K'Kruhk on Hypori. Wookieepedia says:

However, Grievous did steal K'Kruhk's green lightsaber. The weapon became one of Grievous' favorites, the cyborg keeping it handy and using it up until and including his final battle with Obi-Wan Kenobi on Utapau.

Grievous took the second blue lightsaber from Adi Gallia when he struck her down on Boz Pity. The second green-bladed weapon was collected from Master Ur-Sema Du, as explained in Wookieepedia:

Wielding her lightsaber against Grievous' electrostaff, Du fought valiantly but was overpowered and killed by the General. Collecting her lightsaber as a trophy, Grievous left her body where it laid, his existence remaining a secret from the Republic until he was ready to unleash his full might on the Grand Army of the Republic.

Grievous took them from Jedi he defeated in the Clone Wars. The deleted scene from Episode III in the other question is related to this scene from the 2003 Clone Wars cartoon series. This is how Shaak Ti gets captured and how he gets at least two other lightsabers. You'll note that Grievous starts with at least one and then kills the other Jedi and takes theirs.

Sadly the cartoon is no longer considered canon, despite it explaining a good amount of backstory between episodes 2 and 3

Not the answer you're looking for? Browse other questions tagged star-wars lightsaber revenge-of-the-sith general-grievous or ask your own question.