Facts: The main characters are humanoid beings. Male and female, and very similar looking to each other. I know they could fly by some device that looked like a board, and that they were emotionally involved with each other.

They had an odd look: tall faces and no hair at all, although I'm not certain about the female character. Both had armor on them that was tightly fit to their bodies, and was blue-grayish colored. I'm not sure, but I believe they spoke French.

That's all I can recall about it... Except that the environment was like blue-grayish also, SF buildings etc. Not quite sure they flew over some watery areas... I've been searching the net for days and more, but have found nothing. Hope someone here can point me in the right direction. 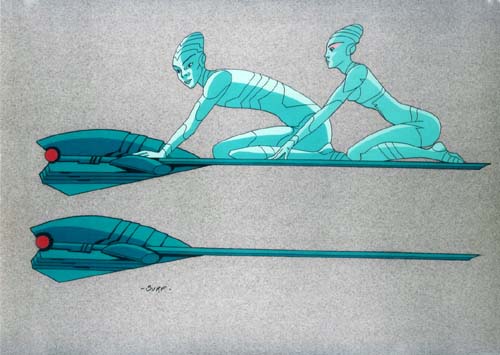 Other images available through the link above, however you have to scroll down the embedded iframe to find the cartoon in question. Not directly linkable.

On YouTube, you can find various episodes and clips. This one from Le Heaume Magique shows them standing on their boards upright and may facilitate validation a bit easier.

5
Mid-80s cartoon with 4-5 robots with "special powers" to zap things; had a scene with a kraken chase on an ice world
3
Looking for a book series written for youth or young readers
6
Obscure failed 90's live-action sci-fi pilot or mini-series involving teleportation and solar sails
6
Storyline involving killer robots that harvest legs
13
Looking for TV Series or Movie about AI taking over the earth, probably aired in the 90's
9
TV series from 70s or 80s - 1 female pilot was cloned from the other pilot's fingernail
5
Collection Fantasy story book
5
Medieval cartoon with blonde prince wearing blue, searching for 7 magical gems with a knight
6
Cartoon series: kids disappearing under bed into rectangular blue portals