Who charged down the pile of dead soldiers/horses in the Battle of Bastards?

The encirclement of the Stark forces had just started. As the Bolton forces marched forward with their shields and pikes, all of a sudden a Bolton force charged down from the top of the pile of dead soldiers and horses.

Who was that? They must have been Bolton forces (maybe House Karstark)? Did they have an exit strategy? They would eventually get run through by the pikes like all the encircled forces.

The other answers have correctly identified the character (It was Small Jon Umber, Lord of Last hearth) in question but none of them have dealt with the Other part of the Question.

Did they have an exit strategy?

No they did not have an exit strategy. They were there to finish the show.

Original plan of Starks was explained in Jon's War council:

Davos: It's crucial that we let them charge at us. They've got the numbers, we need the patience. If we let him buckle our center, he'll pursue. Then we'll have him surrounded on three sides.

Jon however got emotional when Ramsay threw the bait of releasing Rickon. He pissed on the sound plan and rode head on, forcing his soldiers to abandon their fortified positions and follow Jon. You have to give Sansa this, she was not emotional. She knew Rickon was marked for death and had given him up for the dead. Jon however was still the boy Maester Aemon advised him to kill.

Ramsay knew about his weakness and planned to use it. He wanted to draw him out, envelop his army and destroy the Stark threat once and for all.

Battle turned sour as Starks were at complete disadvantage in head-on battle and eventually they were surrounded from three sides by Northmen and on their rear was the pile of corpses. Umbers specifically moved from there to start cutting down the broken Stark men with element of surprise.

Starks by then were finished and were just waiting to be cut down.

That's when Ramsay decided to deploy the Classic strategy of Hammer and Anvil. Ramsay wanted to draw Jon out of his crude fortifications so that he could use his numbers and horses for advantage. He used Rickon to draw Jon out and it worked, Jon moved into the trap like the idiot that he is. As this meme puts it: 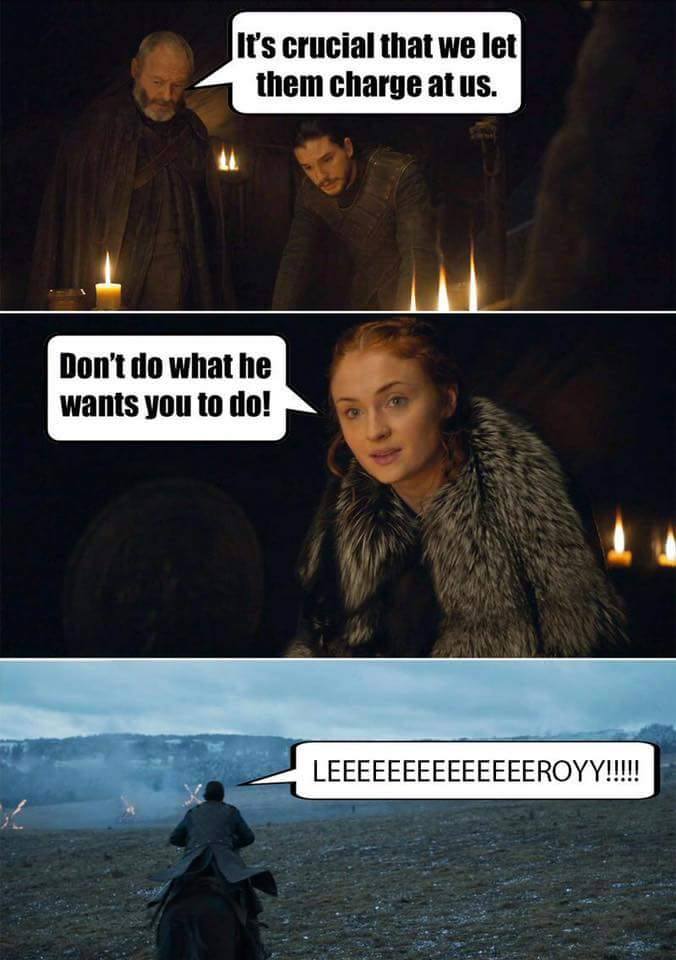 Ultimately came the moment when Starks were surrounded by Boltons and pinned down against the corpse wall. Bolton infantry formed shield walls in three directions and started pushing the Starks back to their doom. The Anvil was ready.

Ramsay had counted on this, he had planned this. Then he turns to Lord Umber (Whom I won't be calling Small Jon out of respect for the books' character) and says this:

That's when Lord Umber becomes the Hammer to crush the Starks between his forces and the Anvil of the surrounding Bolton infantry.

But they will get killed by spears of friendly Forces?

Correct, the risk of friendly casualties is always present in Hammer and Anvil tactics like all the other tactics. If there was no hammer, Starks would be left alone to try and break the shield wall. When Umber came, that's precisely what Starks were trying to do. Umber's attack made the Starks panic and had impact on their morale.

Difference in morals of fighting sides

It's not like Ramsay had any concern for loss of human life, soldiers were expendables.

Ser Davos forbade his soldiers to shoot arrows during the battle because that would have resulted in friendly fire:

But Ramsay had no such concerns and throughout the battle, Bolton arrows kept coming, falling on friend and foe alike.

But why would Umber risk his life? A Man who does nothing in battle risks his life as well. By attacking, he had a chance to quickly put an end to the battle. It was very likely that they would slaughter the Starks from the back long before Infantry managed to reach the Bridge, seeing as Stark men were broken.

It was Smalljon Umber and his Umber/Bolton men during the Second Battle of Winterfell[1].

As per the small extract on his Game of Thrones wikia page[2]:

... Smalljon leads the Bolton spearmen who form a wall around the Stark army, rallying them with a cry of "Who owns the North? We do!" After the Stark army is surrounded by the spearmen, Smalljon climbs the wall of bodies to fight in the circle, beginning by slaying an injured wildling who was attempting to escape. He fights his way to Jon Snow, but is swept away by the crowd before they can fight. ...

Smalljon uses the body pile as a natural divider in the center of the field, directing half his infantry to one side of it and half to the other.

Smalljon himself, along with a bodyguard of ten men, charges straight up the hill of bodies.

To confirm that this is Smalljon Umber the character list at the start of the script identifies him as such:

We can also do a visual comparison to confirm this, this is Smalljon whilst still in the Bolton ranks waiting to charge: 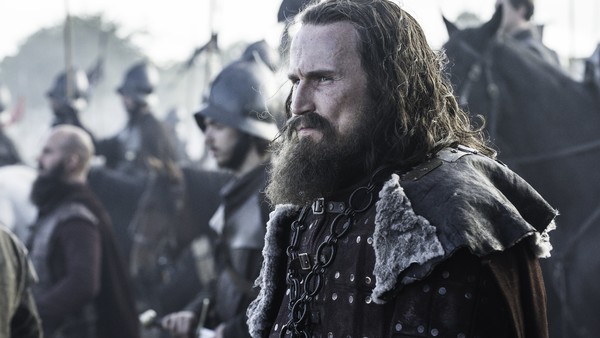 Then compare that to him charging with his men and then him stood on top the body pile and it becomes clearer that it his him. 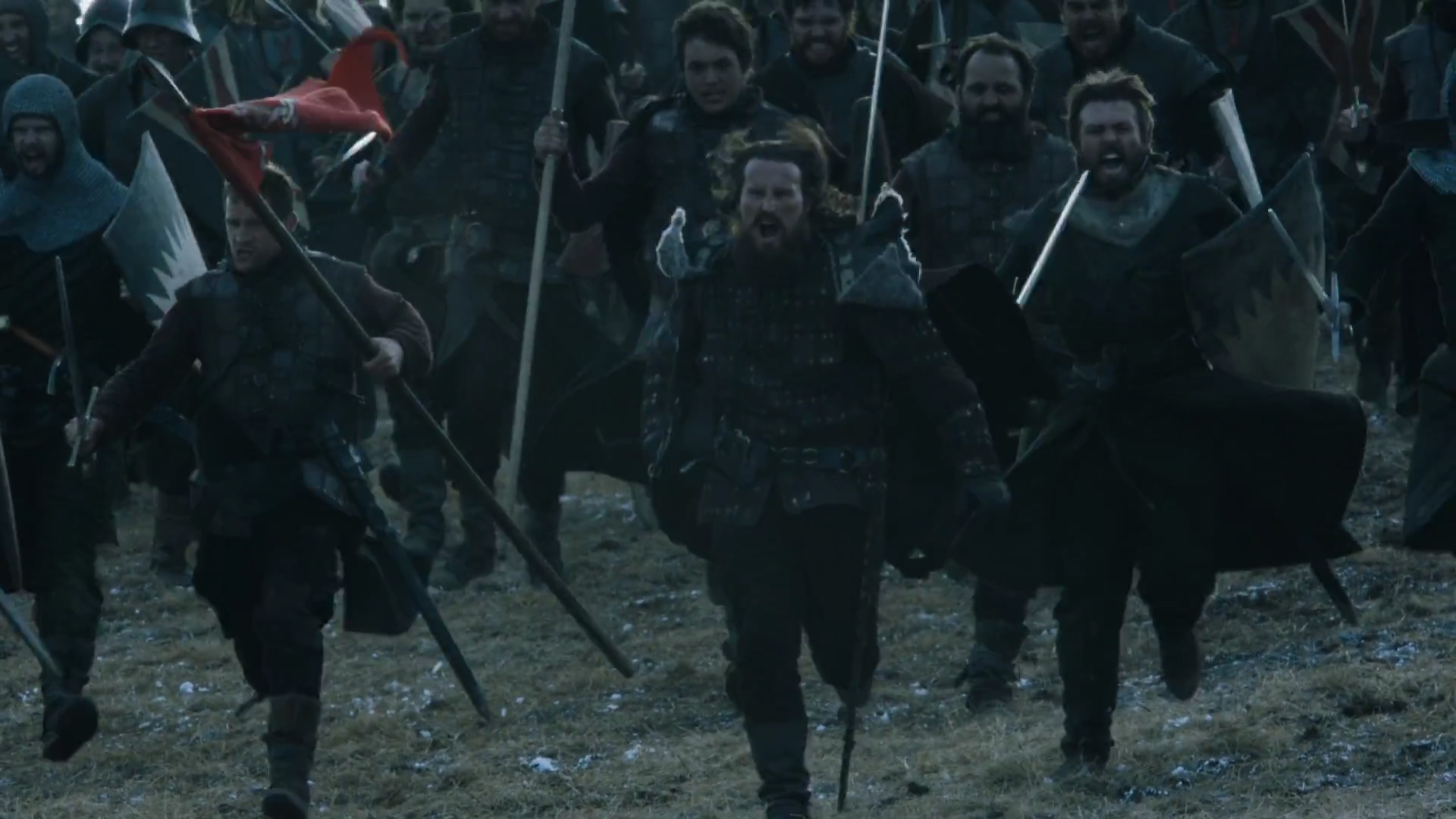 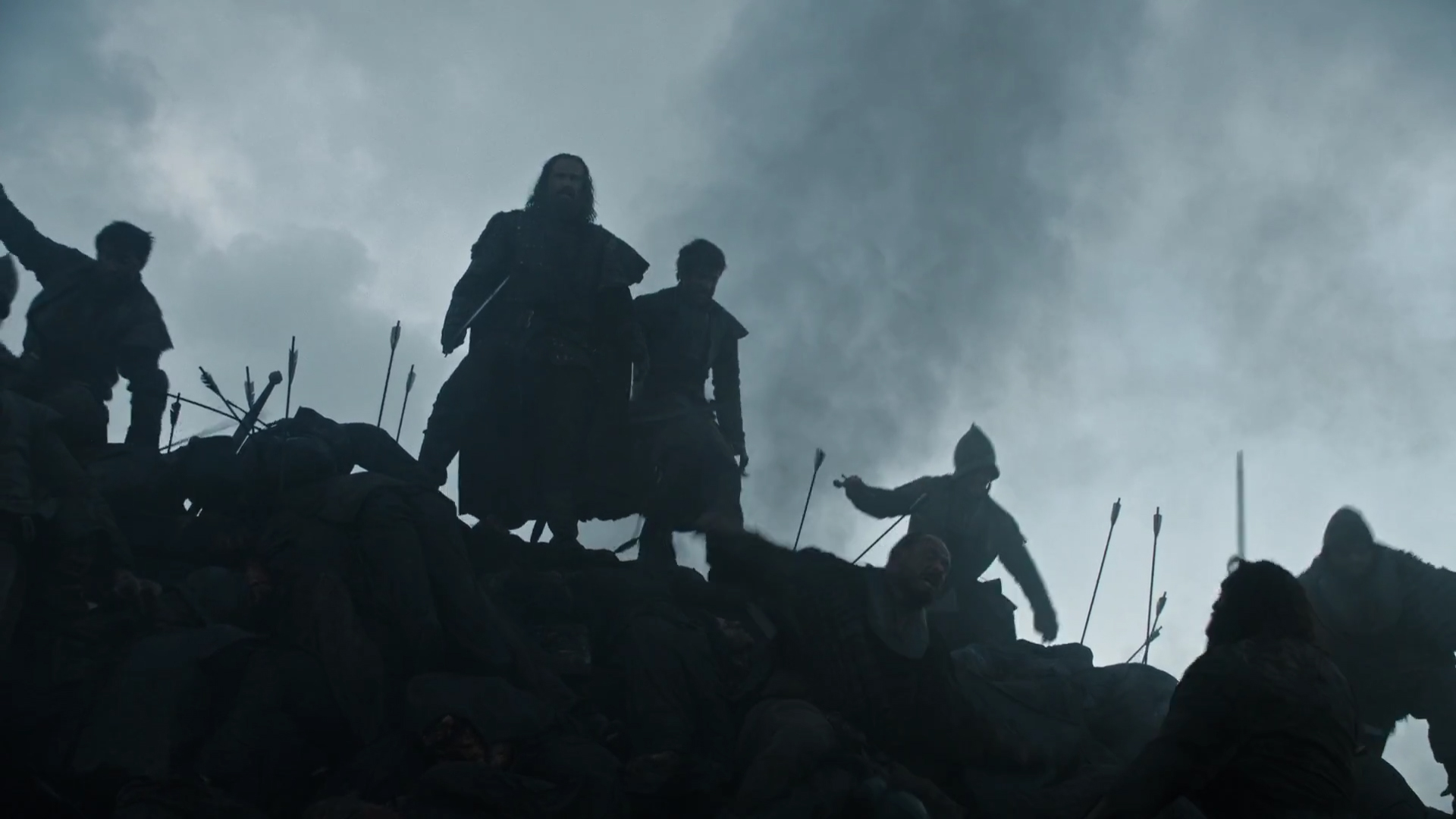 Smalljon Umber and his soldiers. They were sent by Ramsay Bolton to cut off Jon Snow's army just before the shield wall was created around them, closing the trap. 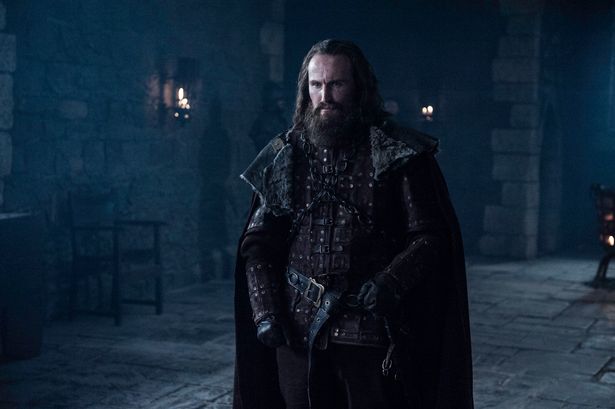 28
How do we know this character's lineage, based on the show?

10
Who is the Rebel pilot who got stranded during the Battle of Yavin and had his place taken by Luke?
1
Who is the unidentified character in this photo of dead characters from The Walking Dead?
11
Why do the tribesmen of the Vale hang around Tyrion for so long?
7
The number of soldiers each house can rally
7
Why wouldn't Lady Brienne strike down the Red Woman once she realized who she was?
6
How could the Battle of the Bastards end that way?
12
Are there any fully noble-born (and acknowledged) bastards in the Game of Thrones TV show?
9
Why doesn't the army of the dead run?
8
Who died in the battle against the army of the dead in Season 7 Episode 6?
8
How many days have elapsed since the Battle of Winterfell?