I've been trying to find a collection horror stories that I used to have in the 90s when I was a small child.
I don't think they had it at school. It was definitely not Scary Stories to Tell in the Dark. I also read those and enjoyed them immensely.

It had large full page color illustrations of the stories that were terrifying and quite disturbing to me as a child.

It had several short stories and was a large, thin, book; significantly larger than legal paper but I'm not sure how large since I was so young when I had the book. All the illustrations were in full color, I think.

There are two stories from it I remember. I'm not sure about the details but the overall plot I'm sure of.

One was about a man who wants to book passage on a passenger ship, but the cabins are all full. Somehow he finds out there is one free cabin. The crew tires to dissuade him from using it and say they never book it because it's haunted or something. He insists, saying he's not afraid, and is allowed to sleep in the one empty cabin. He starts getting scared at night and hears some sound or something. Maybe he heard knocking but there wasn't anyone at the door. Anyway he winds up in bed with the porthole window open and a dead man who had drowned crawls in through the porthole to sleep in bed.

There was a truly terrifying illustration of the man lying in bed with the drowned corpse crawling in through the window.

The other story I don't remember well at all except for the illustration.

There was some man who was being hanged for something, and they hang him but he doesn't die. His corpse keeps twitching and starts jerkily moving and chases the people who hung him.

I mostly just remember the illustration of a corpse with a grotesquely long neck, broken and disjointed and splattered with blood, jerkily staggering after a crowd of people.

I'm pretty sure this was a children's book of some kind. I must have been 6-8 when I had it, and while it was pretty gruesome and dark it seemed to be humorous or at least didn't take itself seriously. The illustrations were almost cartoony, not like the charcoal realism of Scary Stories to Tell in the Dark.

Could it have been Mostly Ghostly by Steve Zorn? It's a collection of classic horror tales adapted for children, and it does include an illustrated version of The Upper Berth. It also contains Ambrose Bierce's A Creature of Habit which has a walking hanged man.

Here's its illustration for The Upper Berth: 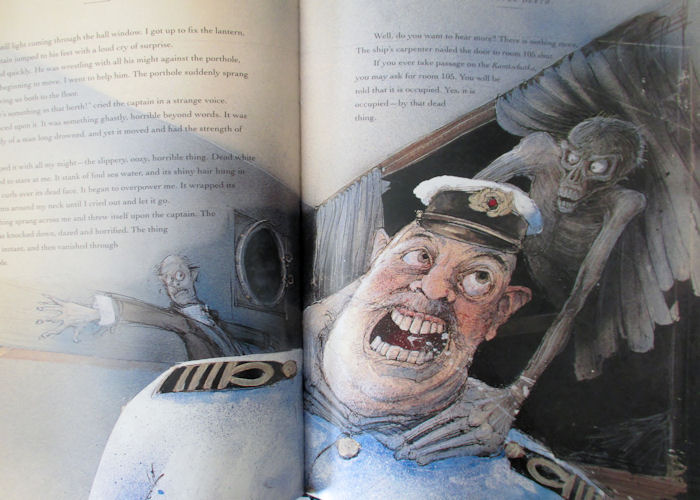 Also, a summary of A Creature of Habit specifically mentions the wobbling head and the rope still attached to the body, which is grabbed onto by some of the townspeople.

Not the answer you're looking for? Browse other questions tagged story-identification horror illustrated-story or ask your own question.