What are Luke and Yoda eating in Yoda's hut in Episode V? [duplicate]

I was watching Episode V with my nephew yesterday.

In the scene in Yoda's hut on Dagobah, Yoda offers Luke some oat porridge like food before revealing himself to be a jedi master.

My nephew's question was:

What are they eating?

He was incredulous when I said 'porridge', but that's my closest guess.

There's mention in the film and film script that he's cooking something called rootleaf.

CREATURE: Not far. Yoda not far. Patience. Soon you will be with him. (tasting food from the pot) Rootleaf, I cook. Why wish you become Jedi? Hm?

The original junior novelisation describes it as "rootleaf" soup

“Not far,” said the creature. “Yoda not far. Patience. Soon you will be with him.” He tasted the food directly from the pot. “Rootleaf, I cook. Why wish you become Jedi? Hm?”

Once in the house, the creature immediately busies himself with cooking. He has a pot hung over a little fire, and two small cauldrons sitting among coals, and he runs back and forth between them, throwing roots and swamp weed into them. As he cooks, the smell that wafts through the room reminds you of a garbage depot in the hot season on Tatooine.

The creature shoves a spoonful of root-leaf stew into your mouth. It has the consistency of boiled brains, and you’re about to spit it out when you stop—it doesn’t taste terrible, actually. You chew and swallow.

In the Star Wars Encyclopedia, it's described as a nourishing stew

Rootleaf: A type of plant native to Dagobah. The Jedi Master Yoda used rootleaf to brew a potent and nourishing stew.

In the factbook "Star Wars: Absolutely Everything You Need to Know" it's back to being rootleaf (with no hyphen) and it's a soup again. 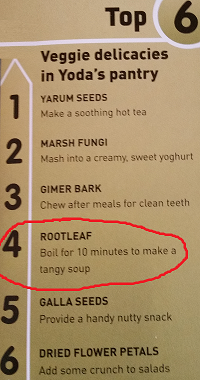 Not the answer you're looking for? Browse other questions tagged star-wars luke-skywalker the-empire-strikes-back food yoda or ask your own question.

10
Food in the Star Wars Universe?
25
What does Yoda's species eat?

45
Does R2D2 Try to Trick Luke in Episode V - Empire Strikes Back?
17
Is there an explanation for why Yoda's grammar slips in Empire Strikes Back?
9
How did Obi-Wan Know About Yoda?
12
Why did Obi-Wan wait years after his death to tell Luke to go to Dagobah to find Yoda?
10
Did Yoda (and other Jedi) have any lethal Force abilities?
17
In what way was Luke's training "incomplete"?
46
Why does Luke draw his blaster instead of his lightsaber to deal with an apparent threat?