Did the Rebels know or suspect Vader himself would board the blockade runner?

Episode IV begins with the Star Destroyer Devastator (Vader's flagship at the time) pursuing the Rebel blockade runner Tantive IV. The blockade runner is soon captured and boarded by Imperial stormtroopers and Vader himself.

Did the Rebels know or suspect Vader was on the Star Destroyer before he boarded the blockade runner? In other words, did they have any idea ahead of time that Vader would step through the breached door? 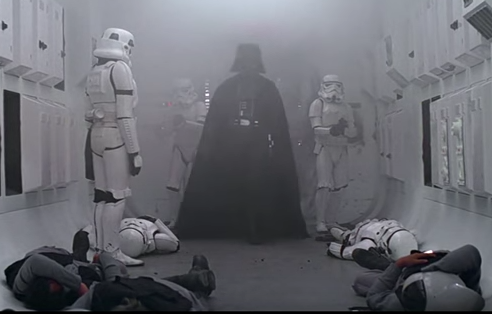 I'm not suggesting that the Rebels should have surrendered rather than stalled for time by resisting the Imperial boarding attempt. I'm just curious if they knew or suspected that they would have to resist Vader in addition to stormtroopers as the Imperials attempted to board the blockade runner.

Leia knew (and possibly the Tantive IV's command crew). It seems unlikely that rank and file soldiers would have been told.

And Leia knew, the moment the ship identified itself as the Devastator, there would be no escape.

It was Darth Vader’s ship.

Not the answer you're looking for? Browse other questions tagged star-wars a-new-hope the-rebel-alliance or ask your own question.

6
Why didn't the Blockade Runner surrender?

29
How did Vader summon a bunch of bounty hunters quickly, in the middle of nowhere, to hunt for the Millennium Falcon?
24
Why were there no Interdictor-class Star Destroyers included in the taskforce hunting the rebels at the Battle of Hoth?
9
How is Darth Vader's ship able to catch the Tantive IV over Tatooine?
118
Do the Imperials know they are evil?
54
What was C-3PO talking about when he said, “That’s funny, the damage doesn’t look as bad from out here.”
28
Why does Darth Vader opt to physically strangle Captain Antilles at the beginning of “Star Wars” (1977) instead of “Force Choking” him?
74
What did Darth Vader mean by “There’ll be no one to stop us this time.” Who had “stopped” Vader—or the Empire—previously?
12
Does any explanation exist clarifying what happened to the escape pod R2-D2 and C-3PO used at the beginning of the first “Star Wars” film?
50
How did Kendal "as clumsy as he is stupid" Ozzel attain the rank of admiral?
32
Why did the Imperial Star Destroyer open fire on the Tantive IV?