What happens to a person taken over by an Agent once the agent voluntarily leaves? [duplicate]

Ask Question
Asked 9 years, 3 months ago
Active 6 years, 6 months ago
Viewed 3k times
21
This question already has answers here:
What Happens to a Person Taken Over By An Agent? (2 answers)
Closed 6 years ago.

What happens to a person (both their consciousness in the Matrix, and their body) once they are take over by an Agent program and then the Agent leaves, if nothing traumatic happened to the Agent while "wearing" them?

The only examples I remember canonically can not shed any light on this since the person was damaged/killed while being taken over (helicopter pilot and truck driver in The Matrix).

I'm only looking for canonical examples.

There are three fully canon examples of an Agent leaving a 'civilian' after possessing them.

In the Animatrix segment "Detective Story", Trinity shoots a private detective who's just been taken over by an agent. No sooner has he been shot then the agent leaves (to find a less disabled host) and he is restored to his former self with no obvious ill-effects aside from the fatal gunshot wound.

In the comic "Day in...Day out" which you can read online here, a civilian is taken over by an agent. After an extensive firefight (in which 'Agent White' loses an arm) she is restored to her body and has no memory of the incident but still has the injuries suffered during the assault. 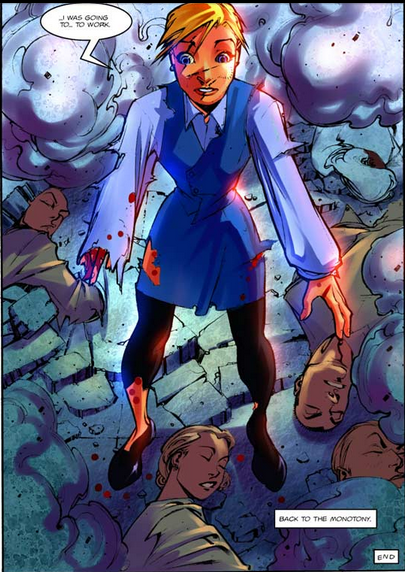 This is extremely similar to the comic "Wrong Number". An Agent takes over a telephone repair engineer and kills a redpill, then regains consciousness with no memory of having been possessed. 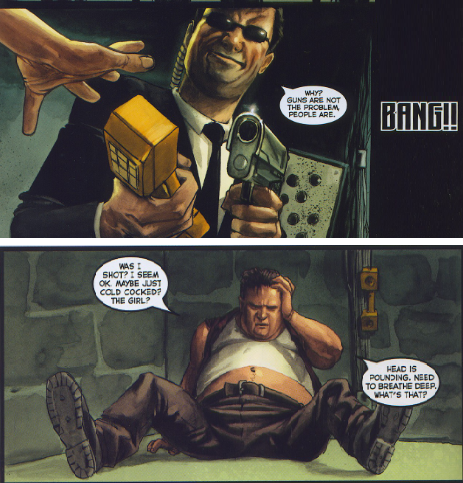 The last instance offers no clarity as to the mental state of someone being left by an Agent but when Trinity shoots the helicopter pilot (in the famous "dodge this" sequence), we see the pilot revert to his former self physically within seconds. The agent reappears a few minutes later, after having possessed another human.

This comes up in the comic Day In... Day Out (not sure how canonical they were?) where the answer is ... not much. The possessed has no memory of the Agents actions while under control - essentially blacking out and waking up wherever the Agent lets go.

You can see the comic here.

I don't think there is an example where a person is shown alive after an Agent has left the person's body (although I'd have to re-watch Animatrix to be sure). However, think about the many examples where the "free humans" kill Agents (usually with bullets). You often see the Agent revert to its previous host with visible evidence of the shot that "killed" the Agent. It is reasonable to assume that if the Agent would remove the human from the Matrix when leaving (i.e. leaving nothing behind) then they would do the same to the corpse that was shot.

So a host will probably not just disappear after the Agent left. If the host died you would have a lot of inexplicable deaths. Also, the Agents have no incentive to kill their hosts. I even speculate that this is how they got Mr. Anderson home after bugging him (they could have also drugged him, but this seems easier, seeing that he didn't have any memory of being drugged).

14
What Happens to a Person Taken Over By An Agent?
30
Why didn't the agents take over Neo's body?
33
Why are there only three Agents at a time in the Matrix?
10
Which Matrix related properties are considered 'canon'?
6
Whose bodies are the agents possessing when we first see them?

13
Won't the public incidents involving agents undermine the illusion of the Matrix?
14
What Happens to a Person Taken Over By An Agent?
15
Did the Agents know about the history of the Matrix and/or previous Ones?
11
Do we know of any programs that voluntarily chose deletion instead of exile?
7
Was Neo dreaming when Agent Smith interrogated him, his mouth disappeared, and a robotic insect crawled into his belly button?
11
Why didn't Sati choose deletion rather than exile?
16
Is there good canon evidence for the “Nightmare Matrix”?