Ask Question
Asked 6 years, 1 month ago
Modified 1 year, 2 months ago
Viewed 365 times
8
This question already has an answer here:
Young adult book, read in the 1990s, about a young boy who is inherently lucky who breaks a testing unit (1 answer)
Closed 6 years ago.

A young man on the cusp of becoming an adult is to take a test mandated by the Empire (Emperor) called the Fortune Hunter Test or something. Basically it is a test that is supposed to set you on your life path and some 'very lucky' people who pass it are taken to special schools and never seen again but assumed to be filthy rich or whatever.

The kid takes test and is one of the lucky ones and they take him through a matter transmitter called an MT Screen or Empty Screen. It is gray and opaque. The kid is (fuzzy on this part, as I was like 11 or something and sick) rescued or escapes or something and goes on the run after realizing that the Emperor is actually culling out the people who are lucky or smart enough to threaten his reign.

The kid ends up fighting the for a rebel group that is part of an interstellar circus or something as a cover. They have all this tech based on the matter transmitters including a MT cube that is basically projected around the person as a shield but can have the walls removed so they can be shot then have them pop back into existence to protect the person inside. Also the mt screen can be weaponized as it instantaneously transmits matter that it touches to another place and can therefore be used as a slicer to remove parts of people or whatnot (Kind of violent theoretically, but not really that bloody).

At one point the kid is trying to get past a security checkpoint and the ringmaster (I think) gives him the identity Asa Baqua (spelling?) who we later find out was his child who maybe passed the fortune hunters test before, and disappeared, giving the ringmaster (weird word but that is what I remember) a reason to fight against the emperor.

Anyway, it was teen fiction or sci fi/fantasy and I loved the story but only read it once forever ago. If anyone can figure out this book or remembers having read it please let me know!

This is definitely a duplicate of Young adult book, read in the 1990s, about a young boy who is inherently lucky who breaks a testing unit, i.e., Donald Wismer's Starluck. I actually just finished reading it yesterday. It has the Imperially mandated fortune test. The trip through the MT is after his initial escape (via blaster malfunction) and by his choice (albeit heavily implied to be via his luckiness). He does join what seems to be an interstellar circus, but is actually a faction of the "Bel" group, rebels to the Empire, run by the ringmaster, Ahm Baqa. He does indeed get said identity, and the last third or so of the book is dedicated to the Bels having perfected the MT and how they're weaponizing it against the Empire.

The other element, which I neglected to add when I asked about it, is that they all train in "Sh't'kan K'rati", which is an incredibly deadly (and illegal) martial art that is clearly just regular Shotokan Karate, something the author is trained in. 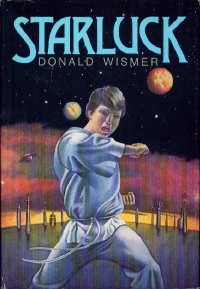 11
Young adult book, read in the 1990s, about a young boy who is inherently lucky who breaks a testing unit
3
Looking for a Pre-2000 novel with involving children with the power of "Luck"

21
Mind reading machine overwrites everyone's brain
6
A story about turning all four walls into TV screens; becoming a totally inert human
13
The original Divergent story
11
Young adult book, read in the 1990s, about a young boy who is inherently lucky who breaks a testing unit
3
Looking for a book about imaginary friend that comes through a haunted mirror
14
Book about a kid who gets sucked into his computer game
15
Book about a boy and girl in proxy magical competition including a field of ice in a magical circus?
4
I’m trying to find a book about portals to other dimensions