Whose helmet did Rey put on?

In The Force Awakens, while having her meal next to a fallen AT-AT, Rey put on a rebel pilot helmet. Whose was it? It seemed to have "Ræh" written on it, in Aurebesh... Did the helmet belong to someone she adopted her name from?

Her X-Wing, (callsigned 'Yellow-4') crash-landed on the planet during the Battle of Jakku and was salvaged by Rey along with a variety of survival gear items found in her ship's storage locker. 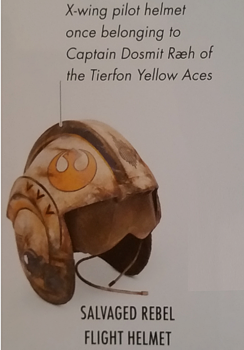 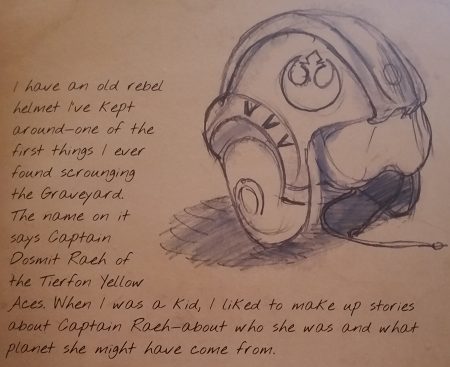 Beyond that, nothing is known of Captain Ræh other than that her ship crashed on Jakku. The fact that her ejector seat had been fired (and that the canopy was missing from her X-Wing and that her helmet was found at the crash site) strongly indicates that she almost certainly survived the initial impact. 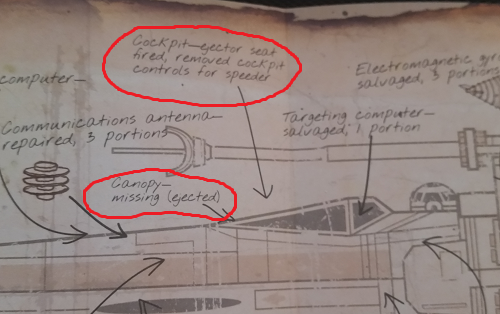 Matt Matrin of the Lucasfilm Story Group has confirmed (sorta) that the name Rey has nothing to do with the helmet.

MM: If she [Rey] could read the name on the helmet enough to name herself, why would she change the spelling?

The helmet belonged to a rebel pilot named Dosmit Ræh.

The biggest clues is the Aurebesh writting on the helmet. Link to Canon Canon Aurebesh

In the Outer Rim Territories, Aurebesh was sometimes used alongside Outer Rim Basic, another alphabet.During the Clone Wars, the back of the clone trooper Ponds' helmet had the phrase "Some guys have all the luck" written in Aurebesh

The Aurebesh alphabet translated into English below. I circled the ones on the helmet to make it clearer to see.

You can see that the helmet has the letters, Resh, Enth and Herf Which translates into 'RAEH'. 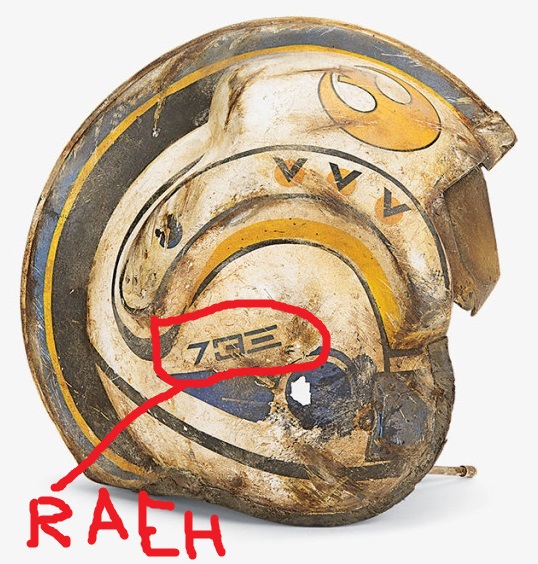 I should also mention that the insignia is from the Tierfon Yellow Aces which she was a part of.

Not the answer you're looking for? Browse other questions tagged star-wars the-force-awakens rey or ask your own question.

112
How is canonicity of derivative works determined for Star Wars?
38
Rey's familial ties in “The Force Awakens”
12
How do ejection systems operate for Rebel pilots?

18
Why do Rey and Leia hug in The Force Awakens?
26
Did Rey have an X-wing pilot doll?
11
How did Rey know how to do this?
12
What was the initial escape ship of Rey and Finn?
14
How did Rey get her blaster back?
8
Who was the old human woman in Niima Outpost?
6
Who did Kylo Ren think Rey was in "The Force Awakens"?