What's with the Maesters and chains?

In game of thrones Maesters are always represented as wearing a large chain necklaces. Then in the season 6 finale we see this grand library with countless books, and it seems like all of them have a chain attached

What's with the Maesters and their chain fetish?

The Maester's chain, forged of different metals, is a symbol of service and an indicator of the wide learning the particular Maester has achieved. It is a symbolic ornament with multiple layers of meaning.

"He told me that a maester's collar is made of chain to remind him that he is sworn to serve," John said, remembering. "I asked why each link was a different metal. A silver chain would look much finer with his grey robes, I said. Maester Luwin laughed. A maester forges his chain with study, he told me. The different metals are each a different kind of learning, gold for the study of money and accounts, silver for healing, iron for warcraft. And he said there were other meanings as well. The collar is supposed to remind a maester of the realm he serves, isn't that so? Lords are gold and knights steel, but two links can't make a chain. You also need silver and iron and lead, tin and copper and bronze and all the rest, and those are farmers and smiths and merchants and the like. A chain needs all sorts of metals, and a land needs all sorts of people."

Quote is from Chapter 41 of A Game of Thrones, where Jon Snow tries to convince Maester Aemon to take Samwell Tarly under his tutelage.

As for the books shown in the Season 6 finale, there's no equivalent in the (Song of Ice and Fire) books that I recall, and certainly no exposition on (chains on books). However, where the chain is a symbol to the Maesters, it's quite reasonable for them to extend it to their libraries - just as the Cross is a Christian symbol that shows up on a wide variety of places - rosaries, steeples, Bible covers, bookmark tassels, chalices, communion wafers, sword hilts, stoles, tattoos, and bumper stickers.

After a rewatching of the scene, @BCdotWEB's answer appears more correct - the chains are linked to crossbars for security: 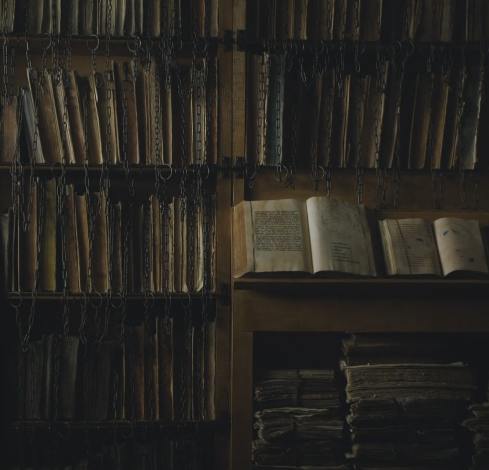 And the crossbars are locked to the bookcase with conspicuous locks at the endcap: 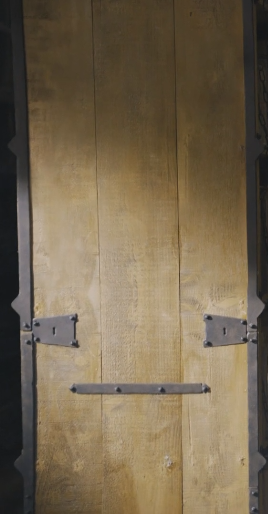 I recommend you accept @BCdotWEB's answer instead of mine.

Securing books to a bookcase via a chain was common in the Middle Ages. As explained on Wikipedia:

A chained library is a library where the books are attached to their bookcase by a chain, which is sufficiently long to allow the books to be taken from their shelves and read, but not removed from the library itself. This would prevent theft of the library's materials. The practice was usual for reference libraries (that is, the vast majority of libraries) from the Middle Ages to approximately the 18th century. However, since the chaining process was also expensive, it was not used on all books. Only the more valuable books in a collection were chained. This included reference books and large books.

You can still visit some remaining chained libraries.

Maesters' Chains and the chains used in the Citadel's Library are unrelated.

A Maester's Chain is a badge of office indicating the wearer is a graduated Maester of the Citadel. The individual links of the chain are symbolic as well, as explained elsewhere.

The chained books in the library are a security feature designed to prevent people from walking off with the Library's books. Chains are used for security purposes across the Seven Kingdoms.

N.B. It's possible that the Library has implemented a "Maester Decimal System", with the metal of each security chain representing the contents of the tome. Gold chains for financial manuscripts, Silver links for medicine, etc. However, this would be unconfirmed until we see other sections of the Library as the chains we have seen have been of the same metal.

6
What do the “half-blue” portraits represent in the Game of Thrones Season 3 ads?
10
What is the status of science in the Seven Kingdoms?
28
How do we know this character's lineage, based on the show?
7
How did Daenerys know about the “Hand of the King” pin?
4
How does the Citadel feel about Cersei's actions?
7
What do Jon Snow and the party really hope to gain?
31
Why did 'The Mountain' hesitate?
6
Why are harmless books in restricted section?
70
Why was this character made Grand Maester?