Do they really need to fear the White Walkers?

When Benjen Stark leaves Bran by the tree, he says that he cannot pass the Wall and the dead cannot pass.

Since he was created as he is by the same magic that created the Ice King, that means the Wall will stop them.

What am I missing, or will the sheer volume of undead allow then to tear down the Wall and break its spell?

The dead men cannot pass the wall, that is true. Wall was enchanted with ancient magic by its builder to stop the dead men from coming.

But the Wall is not eternal. It can fall. The others will not try to pass through the gates, they will try to bring it down. We know it can be brought down by magical weapons such as Horn of Joramun which according to legends has the power to bring down the wall.

“The Others can do things with ice that we can't imagine and make substances of it."

Winter has finally come which means more snow and increase in power of the others.

If Wall is not defended by Might of all Men, Others will find a way to by pass it and continue their war against Life.

According to Books however, there is one more point:

"He's some dead thing. The monsters cannot pass so long as the Wall stands and the men of the Night's Watch stay true, that's what Old Nan used to say. He came to meet us at the Wall, but he could not pass. He sent Sam instead, with that wilding girl"

There are two prerequisties for the Wall to deny entry to the others.

As of now, Men of the Night's Watch are not true. They have mutinied twice and killed two of their Lord Commanders. It is very important that Men of NW remain true because if any of them escorts the Others inside, Enchantments won't stop them.

The mark on Bran's hand. 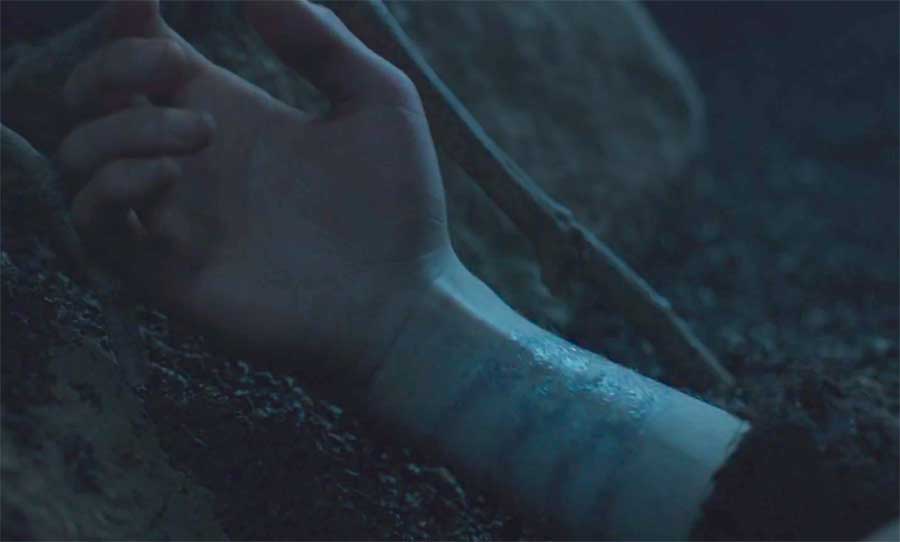 In s06e05, we saw the Night King touch Bran's hand which allowed him to pass through the barrier protecting the tree where Bran was hiding.

The legend says that Bran the Builder built the Wall and to amass such a huge amount of magic he must have had help from the Children of the Forest. The children must have used the same magic to protect the cave too.

By that logic, if Bran crosses the Wall then the White Walkers can too.

EDIT: Some of you mentioned that the Night King used the mark only to find the location of Bran. Here is the conversation that followed between Bran and the Three-Eyed Raven after the Night King touched Bran's hand in S06E05:

As Forward Ed mentioned in the comments, after touching Bran a part of the Night King was now inside the cave which allowed him to breach the barrier.

Since it was not mentioned in the show whether the mark was removed or not, we can assume it is still there.

The wall has magic preventing the Others and the wights from tunneling under the ice or from using any of the openings, but I think it does not prevent them from climbing the wall. For example, in A Dance With Dragons, Jon Snow has a dream where he fights wights that climb the wall to attack him at the top. Here is the relevant section (emphasis mine):

That night he dreamt of wildlings howling from the woods, advancing to the moan of warhorns and the roll of drums. Boom DOOM boom DOOM boom DOOM came the sound, a thousand hearts with a single beat. Some had spears and some had bows and some had axes. Others rode on chariots made of bones, drawn by teams of dogs as big as ponies. Giants lumbered amongst them, forty feet tall, with mauls the size of oak trees.

“Stand fast,” Jon Snow called. “Throw them back.” He stood atop the Wall, alone. “Flame,” he cried, “feed them flame,” but there was no one to pay heed.

They are all gone. They have abandoned me.

Burning shafts hissed upward, trailing tongues of fire. Scarecrow brothers tumbled down, black cloaks ablaze. “Snow,” an eagle cried, as foemen scuttled up the ice like spiders. Jon was armored in black ice, but his blade burned red in his fist. As the dead men reached the top of the Wall he sent them down to die again. He slew a greybeard and a beardless boy, a giant, a gaunt man with filed teeth, a girl with thick red hair. Too late he recognized Ygritte. She was gone as quick as she’d appeared.

Considering this, I think the condition that the Men of the Night's Watch need to remain true for the Wall to repel the Others simply means that they need to man the wall in order to prevent the enemy from climbing over it. "A wall is only as good as the men defending it."