Is there any tangible proof of Jon Snow's lineage?

Bran sees that Jon is the son of Lyanna at Tower of Joy.

However, People of the north won't just believe words.

Howland Reed was with Eddard at the tower, Eddard is dead, but Howland could be alive. Even if Howland Reed comes forth and tells Jon's true lineage. It will still be just words.

Why would the people believe the words of a child and an old man?

Howland Reed is alive. He is the last survivor of the Tower of Joy and knows what transpired there. He has kept this a secret due to his loyalty and friendship with Eddard Stark.

But as you correctly note, cynical lords won't believe word of one man. Outside North it would be even more complicated because Reed is a Crannogman who are not viewed favorably in the South.

Besides, If Jon is a Targaryen and son of Prince of Dragonstone, Rhaegar Targaryen, that's a concern for whole realm, not just the North.

By law, (If Lyanna and Rhaegar married, which we do not know they did, see update below.), a grandson (Jon) by eldest son (Rhaegar) comes before a daughter (Daenerys) in succession for a King (Aerys II). If Jon is not a bastard, he is infact the rightful King of Westeros as heir of the mad King, not just North.

Even though there is no Polygamy in faith of the seven, Aegon the Conqueror and Maegor the Cruel practiced it. Quoting GRRM:

Maegor the Cruel has multiple wives, from lines outside his own, so there was and is precedent. However, the extent to which the Targaryen kings could defy convention, the Faith, and the opinions of the other lords decreased markedly after they no longer had dragons. If you have a dragon, you can have as many wives as you want, and people are less likely to object.

So Rhaegar could be married to both Elia and Lyanna simultaneously.

There is no tangible proof for Jon's parentage because only these people were present at the tower or knew about it or possibly knew about it:

(One can argue that two other members of KG namely Prince Lewyn Martell and Ser Jonothor Darry may have known as well but it appears Prince Rhaegar did not confide in all the KG. Ser Barristan Selmy and Ser Jaime Lannister did not know about it despite being members of KG. In any case, Both Lewyn and Jonothor died as well)

Another thing, unrelated to the show but relevant to the books, is George has stated that Meera and Jojen Reed might know something about what transpired in the Tower of Joy.

Anyways, Since all other witnesses are dead, Even if the two girls are alive and add their voice to Reed's, that still won't be enough proof. Besides, Jon does not look like your typical Targaryen but that is the case with many of the half-Targaryens over the history e.g. Prince Baelor Breakspear, Prince Valar, Prince Daeron the drunken, Aegor Rivers etc.

Eddard had fabricated the story of fathering Jon on a common woman named Wylla. If she can be found, investigating her would also prove Jon is not son of Eddard Stark but her whereabouts and status is unknown in Show, while in Books she was a serving woman in Castle of Lord Dayne.

To prove his Targaryen blood, Jon will have to do something which only a Targaryen can do. That is, Riding a dragon. As it happens, Daenerys is on her way to Westeros with her Dragons. Drogon is claimed by Daenerys but Viserion and Rhaegel are up for the taking. If Jon manages to claim one of them, no one will be able to doubt his Dragon blood.

There is also the the possibility of Bran adding his voice to Reed's. The whole issue will come up only if Bran does that. Otherwise, Jon is now the White wolf for the realm, not the white Dragon. Bran is not just a boy, If he returns to inform the realm about this, he is the eldest surviving son of Lord Eddard Stark, thus rightful King in the North. Lords have given their allegiance to a bastard instead of a trueborn Stark female, but will they keep Jon as King when their trueborn male Stark liege lord returns? Would Jon want to keep the seat which is rightfully Bran's? I don't believe so. Apparently, as of Season 7, Bran doesn't want to take his rightful place and Jon remains King in the North.

TL;DR No there is no other proof of Jon's parentage except Reed's word.

UPDATE: As of Season 7 Episode 5, it has been confirmed that Rhaegar's marriage to Elia was anulled and he married another which can be no one other than Lyanna. That makes Jon a legitimate Targaryen and therefore the rightful owner of the Iron Throne of Aegon the Conqueror. The records of the High Septon can be produced as evidence for Lyanna's marriage to Rhaegar but that still won't prove Jon is their child.

As of Season 7, Episode 5, Eastwatch the ways of being proven are adding up (as you have duly noted yourself).

All of this combined would likely convince enough of the lords of Westeros to ultimately believe in Jon's claim... and if not Jon's side has dragons...

I think that in season 7 or 8 Jon will display some dragon ability (what else is there besides partial/occasional fire immunity?) which will remove all doubt that he is a Targaryen.

My bet is that the dragons will show some kind of kinship with him, treat him like family.

I just realized after reading your question that she also mentions that "Robert will kill him if he finds out". Considering that, at this time the Baratheons were fighting against the Targaryens, does this mean they just revealed his Targaryen blood line? Didn't even think about that until just now!

Edit: Thanks for the recommendation to the commenter below, and yes technically there is now tangible evidence, if you accept Game of Thrones twitter as physical evidence: 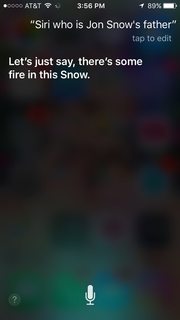 Another result from Siri reads

To know the history, you'll need to do the math: R+L=J

Hope this will help answer the question at least in an overall sense, for the TV show, for the books, we may never know … until George finishes the books that is.

15
Assume R+L=J is true. How can that ever be proven in the eyes of Westeros?
28
How do we know this character's lineage, based on the show?
29
Who knows the truth about Jon Snow's parentage (father & mother)
29
Why didn't Ned Stark support this claim to the throne?
27
Why does Jon Snow have dark hair?
26
S07E05: Would this person be the rightful heir to the Targaryen throne when born even if Viserys ascended to the throne before their birth?
10
Who is the "Motherless bastard" that Petyr Baelish is talking about in S06E10?
5
What evidence do we have about Rhaegar and Lyanna?

24
What happened to Jon Snow's direwolf?
5
How did Bran warg into the correct wolf to help Jon in "The Rains of Castamere"?
2
What conditions are allowed for a decree of legitimisation or inheritance?
29
Is Samwell Tarly a deserter of the Night's Watch?
6
Why didn't Jon Snow's army wear shields?
11
Ghost as a Foreshadowing of Jon Snow's Lineage
3
What was Jon Snow's debt price (if there was any)?