Could Jorah Mormont have a claim for being Lord of Bear Island again?

Before Jorah Mormont was sentenced to death in Westeros he was head of House Mormont and Lord of Bear Island. Now Lyanna Mormont is in charge. Later in the show he received a royal pardon. Now does that mean that if Jorah wanted to he could go back and be in charge again?

No, he lost his claim when he was exiled by Eddard Stark. His pardon means he can go back to Westeros, nothing more.

It's possible that, would he return, he would be the next in line after Lady Mormont, but I'd say that this is speculation, and there isn't enough available data to draw a definite conclusion.

Jorah was to be sentenced by Eddard Stark so let's get his thoughts on who Jorah was and why he exiled himself to Essos:

Eddard Stark: Based on whose information?
Varys: Ser Jorah Mormont. He is serving as adviser to the Targaryens.
Eddard Stark: Mormont? You bring us the whispers of a traitor half a world away and call it fact?
Petyr Baelish: Jorah Mormont's a slaver, not a traitor. Small difference, I know, to an honorable man.
Eddard Stark: He broke the law, betrayed his family, fled our land. We commit murder on the word of this man?
Game of Thrones, Season 1 Episode 5, "The Wolf and the Lion"

So it's evident the Ned viewed Jorah as more of a criminal than he is but still that he is a criminal. Note that when Jorah is pardoned it is for the act of slavery not exile as he went into exile on his own accord. As such it is clear that he left the title of his house on his own accord too.

The important part of Ned's quote is "betrayed his family" meaning that from that point of view he probably wouldn't be welcomed back to be Lord of Bear Island especially as Lady Mormont is such a powerful figure leading the house at the moment.

Jorah's first pardon is given to him by King Robert Baratheon so that he is now safe to go back to Westeros, however, he ignores it and instead saves Dany from the merchant. I don't believe we see what the pardon says but taking the Little Bird's word for it, it is so he can go home nothing more.

Little Bird: Psst, Jorah the Andal. The spider sends his greetings and his congratulations. A royal pardon. You can go home now.
Game of Thrones, Season 1 Episode 7, "You Win Or You Die"

The second pardon appears to come from Tywin Lannister.

Tywin Lannister: Can your little birds find their way into Mereen?
Varys: Most certainly, my lord hand.
Tywin Lannister: Lord Tyrell, be a good man and fetch my quill and paper.
Game of Thrones, Season 4 Episode 6, "The Laws of Gods and Men"

It is again safe to assume that this pardon was the same as the one from the King as Tywin was Hand of the King at this point. He was effectively acting as King too at this point as he was mentoring King Tommen Baratheon. As such if Jorah had accepted the pardon, for the reasons outlined above he probably couldn't be Lord again.

When a Little Bird gives the scroll to Barristan Selmy he goes to Jorah to tell him about it before telling Dany.

Jorah Mormont: What's this?
Barristan Selmy: A royal pardon signed by Robert Baratheon. You spied on her.
Game of Thrones, Season 4 Episode 8, "The Mountain and the Viper"

It's not clear if this scroll is the first one resurfaced, the second one or even the first one including a letter from Tywin. However, the scroll is sealed with the seal of the Hand of the King so it could also just be a continuity error as we know Ned didn't seal the first one. 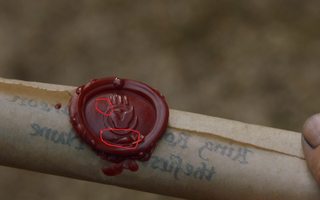 Lastly, let's look at what Jeor Mormont has to say about his son on the matter.

Jeor Mormont: Good. You'll be ready for this, then. l thought a wolf was more appropriate for you than a bear so l had a new pommel made. It's called Longclaw. Works as well for a wolf as a bear, l think.
Jon Snow: This is Valyrian steel.
Jeor Mormont: It was my father's sword, his father before him. The Mormonts have carried it for five centuries. It was meant for my son Jorah. He brought dishonor to our House, but he had the grace to leave the sword before he fled from Westeros.
Game of Thrones, Season 1 Episode 9, "Baelor"

As Lyanna Mormont is a similarly strong character to her father it appears as though she wouldn't move aside to let Jorah take lordship. As the line of succession as passed to her it makes sense that any children she has will then take over as Lord or Lady instead of Jorah.

-14
Who sent Ser Barristan the pardon for Jorah Mormont?

19
What planet does Game of Thrones happen on?
4
How could Ser Jorah Mormont "find out" about the Second Sons?
19
Game of Thrones: What happened to Jon Umber?
30
What's the big deal with the Tyrells controlling Westeros?
9
Does Jorah Mormont feel romantic/sexual love for Daenerys Targaryen?
6
Is Lyanna Mormont the Lady of Bear Island on the show? (in contrast with the books)
12
Why is Gregor "The Mountain" Clegane still a knight?
6
According to the books, who poisoned Joffrey?
7
Is Arya Stark the heir to House Whent?