Why exactly were the Pah-wraiths kicked out of the wormhole?

What I can't remember, or perhaps was never explained, is why the Pah-wraiths were kicked out of the wormhole to begin with?

Do any of the novels or supplemental materials shed any light on this?

No: there is nothing in canon or licensed works that explains exactly why the pah-wraiths were banished.

The only thing we know is that they were considered "false prophets", but that could simply be the product of centuries of Bajoran propaganda.

In reality, the pah-wraiths are an example of the previous generation of sci-fi where you could have one-dimensional antagonistic powers. The only thing the audience is supposed to take away from the pah-wraith's motivations is that they are bad, are trying to destroy the protagonists, and are the main source of power of the villain the audience is supposed to care about, Gul Dukat.

The implication, according to the canon comic The Q Gambit and DS9: What You Leave Behind is that the Pah-Wraith are antagonistic not only to the Prophets but to all other beings with whom they share the higher planes of existence as well as those (on the lower planes) that don't worship them as gods.

As such, it would seem that the major gripe between the Prophets and the Pah-Wraiths is that the Wraiths are basically a bunch of megalomaniacal jerks

DUKAT: Did you really think the Pah wraiths would choose you to be their Emissary? Soon the Pah wraiths will burn across Bajor, the Celestial Temple, the Alpha Quadrant. Can you picture it? A entire universe set in flames, to burn for all eternity. The Prophets have sent me a gift. Their beloved Emissary, sent forth like an avenging angel to slay the demon. 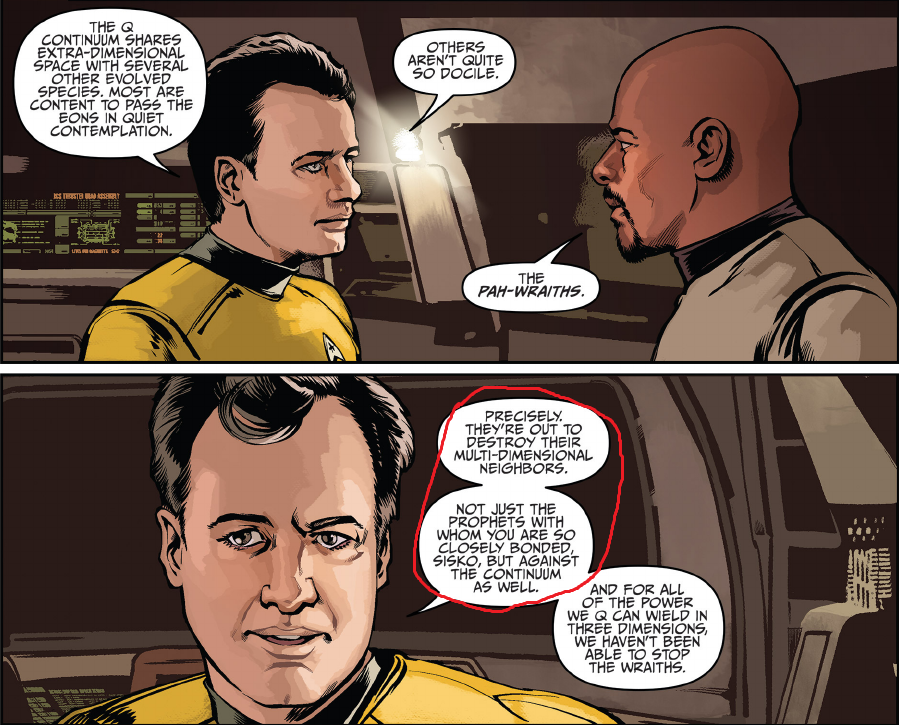 I always thought they were a good parallel to the Dominion vs Federation conflict. My only problem is the lack of fleshing out. Prepare yourselves, the next part is very philosophical...

If you believe the theory that the prophets are dead Bajorans, ascended, transmuted, and evolved to a Godhead, the pah wraith could be nasty, twisted souls of dead Bajorans who lived Machiavellian, deceitful, twisted lives (ie Kai Winn, may she Rot in Fire Caves RIFC).

If so, the reasons for their exile could be that they created discord within the Celestial Temple by reasoning that Bajorans would be a better people if they intervened (ie stopping the occupation) or telling the Bajorans to live for selfish reasons, motivations in life including accumulation of wealth, power.

Obviously, many Bajoran Pahs might have disagreed with them, but assuming that Bajor is like the modern US, maybe it was a pretty even split (think political polarization). It makes sense, that if you hold two completely different set of ideals that is diametrically opposed to the other (pay wraiths would say the prophets were weak for not being bold and hawkish) that there will eventually be a fight of some sort for something as important as the existence of Bajor.

That's making a big assumption, but seeing as how these views would be akin to the views of the Federation regarding a protocol with less advanced civilizations (Prime Directive), I think I prefer this belief.

As Kira would say, its a matter of faith.

The Pah-Wraiths were malevolent as can be seen in the actions of their followers. They constantly are going to war and never attempted to make peace. They are evil for the same reason Ares in greek mythology is evil. The second war led by Dukat followed an initial war with the first group of Pah-Wraiths recorded in the literature. The second group of Pah-Wraiths had a third war against the prophets trying to ascend those locked in the fire caves.

Unlike previous and subsequent Star Trek incarnations, DS9 has a strong metaphysical underpinning. In the very first episode the audience is introduced to the "wormhole aliens" or the "Bajoran Prophets" and as the series progresses the importance of these entities increases. By the final season we're clearly involved in a rather classic good vs. evil storyline. In this respect, Star Trek parallels the Star Wars plotline of "The Force" and it's "Dark Side;" eg., "The Prophets" and the "Pah Wraiths." This is not to suggest that Star Trek writers were imitating Star Wars. I'm merely saying that DS9 employs a well established good vs. Evil plotline. This plotline figures much more directly in the Star Wars films and it increases in importance in DS9 as the program develops.

Most stories, films, and/or TV programs that employ the good vs. evil conceit rarely detail the history of the competing good/evil protagonists because it's understood that these competing forces have always existed in one form or another. Consequently I'm not sure if the concept of one dimensionality should be applied to DS9 non-corporeal protagonists. Early in the DS9 series, it us strongly implied that the wormhole aliens or the Prophets are a force for good and later the Pah-Wraiths are introduced as their ptotagonists--at least on Bajor. The writers could probably had the opportunity to create back story of these two groups of entities since the series was about DS9 occupants this would moved the emphasis of the series to Bajor.

However as the series develops, the metaphysical elements of the story develops considerably and it seems to me that a stronger metaphysical back story should have been developed. I understand why the Bajoran metaphysical was glossed over. Apparently during the first season input from the DS9 audience indicated they were generally disinterested in Bajor and its culture. Since all TV programs live ir die on audience approval one can't fault the writers for providing stories the audience likes.

I found the metaphysical element distracting at times, in large part because we are never given enough of a story to understand the non-corporeal entities. Clearly, Gene Rodenberry created the Federation as a completely secular government that encouraged individual member species to treat religion and faith as tradition presents them. Bajor was a deeply spiritual society. We may presume Earth is not. What I find incomprehensible is Star Fleet's complete lack of interest in the Prophets in spite of the fact that they eliminated an entire Jem-hadar fleet. Perhaps a largely metaphysical topic would have been difficult to address in a single program but one wonders why at least one story arc wasn't developed. I suspect the metaphysical element developed over time almost as an afterthought. A story arc early in the series might have enriched subsequent episodes.

I always kind of thought they were kicked out the wormhole because they tried gain control of the Celestial Temple and destroy the Prophets (DS9: "Tears of the Prophets"). In fact, in the alternate timeline created in the Q Gambit comics, they were able to drive the Prophets to extinction. 1 And there's a bit more about them in the show than just being "false prophets". Granted that's all they were prior to season 6, when you had great episodes like "The Reckoning" and "Tears of the Prophets" -- when their Emissary Gul Dukat releases one from an Bajoran artifact. I suspect that this is only because the writers themselves only began to flush out the back story in the fifth season.2

But overall, yeah they weren't the focus of the show so was no need to create an elaborate story. Though I'd personally like to see this aspect of the DS9 universe explored a bit more.

22
What exactly were the Prophets?
24
Has the Federation ever kicked a planet or civilization out of the Federation?
3
Besides Prophets and Pah Wraiths, do distinct energy species ever meet in the same episode?
22
In Star Trek: Deep Space Nine, what was the Prophets' penance?
3
Could the Quadros 1 probe have been launched in 2193?
14
Is Benny Russell a creation of the Pah-Wraiths?
11
Why did Starfleet not attempt to make contact with the Prophets?