Why didn't Picard go through with the "geometric pattern" plan against the borg?

In ST:TNG Season 5, episode "I, Borg", the crew comes across a damaged Borg individual that they isolate from the collective, and name him "Hugh".

They develop a plan to show an irrational geometric shape and return Hugh to the collective. Their goal was that the unsolvable shape would, over time, overwhelm their processing power and effectively 'lock up' their systems.

Toward the end of the episode, they decide to give Hugh a choice of asylum or returning to the Collective.

After Hugh chooses to return, Picard hopes that his humanization would spread to the Borg. But he portrayed it as if it was an optimistic hope at best.

Why didn't they go through with their original plan anyway? It wouldn't have changed anything for Hugh since the crew already established that they assumed that if it was discovered by the Borg that Hugh had thoughts or ideas contrary to the best intentions of the Collective, his memory would be erased.

Earlier in the episode, Picard made it clear that since they are not open to peace negotiation and only seek to annihilate the Federation, in Picard's mind any action is justified. (Which of course is somewhat contrary to other Picard lines in different episodes/movies. So this is assuming Picard's current frame of mind.)

I understand he wanted to make an exception for the recently-humanized Hugh, but shutting them all down would still accomplish his goal. He could then find Hugh again, without threat of destruction, and replace his neural processors as they suggested they could earlier in the episode, to undo any overload that the geometric pattern may have caused, and thus easily returning Hugh to a working state again.

Is there some other reason I am missing, or is this a plot hole?

Picard's change of heart hinged on his realization that Borg members retain individuality, sentience and autonomy when not submerged in the collective. He initially believed that the Borg members were functionally equivalent to organs or limbs in a human; they should be given no more regard than a severed arm or leg. If Borg members retain a separate viable existence when removed from the collective, then the rules of war apply with regard to individuals and states, and how individuals must be treated when no longer acting as combatants for that state.

Also, if Borg members retain individuality, then it becomes immoral to wage total war, i.e. commit genocide without any allowance for surrender for individuals suddenly left without a functioning government. The Borg collective as a form of government was a legitimate military target, but totally wrecking the collective with nothing in place to sustain the members suddenly cast adrift is as good as genocide. The weapon was too big; Picard realized that it was immoral to use it.

In the TNG episode "I, Borg" there are a variety of reasons that Picard ultimately decides not to use the "Topological Anomaly 4747" weapon against the Borg; 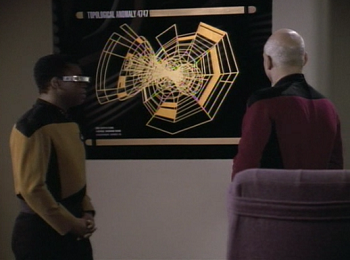 "We the lifeforms of the United Federation of Planets determined to save succeeding generations from the scourge of war, and to reaffirm faith in the fundamental rights of sentient beings, in the dignity and worth of all lifeforms, in the equal rights of members of planetary systems large and small, and to establish conditions under which justice and respect for the obligations arising from treaties and other sources of interstellar law can be maintained, and to promote social progress and better standards of living on all worlds..."

Both Cpt Picard and Cpt Janeway repeatedly express concerns about the prospect of committing genocide in various episode of Trek including VOY : "Scorpion Pt II" and TNG : "The Survivors"

Picard has a profound respect for the opinion of his staff. Geordi La Forge, Beverly Crusher and Guinan (who you would expect to be fully gung-ho about the idea of killing the Borg) all express deep misgivings about the project;

GEORDI : I have to admit... I've been having second thoughts about this plan.

PICARD : For what reason?

GEORDI : Well... I've been getting to know him. The Borg.

GEORDI : He's not what I thought he would be, sir. He has feelings... he's homesick... I don't know... it just seems wrong to use him like this.

Guinan (to Picard) : If you're going to use this person to destroy his race, don't you think you should look him in the eye once before you do it? Besides... I'm not so sure he is Borg anymore.

Third of Five (AKA 'Hugh') expresses genuine independence. He is beginning to fully re-assert his individuality;

PICARD : You will assist us in assimilating this vessel.

Although Picard truly hates the Borg, he balks at the idea of committing cold-blooded murder and using a senient being as a weapon, even in an attempt to avert war;

Picard : As far as I can tell, he seems to be a fully realized individual... He has even accepted me as Picard, Captain of this ship, and not as Locutus.

GEORDI : Then... you've reconsidered the plan?

PICARD : Yes. If we used him in that manner, we'd be no better than the enemy we seek to destroy. I want other options.

Quotes from the episode in question:

"When I look at my patient, I don't see a collective consciousness, I don't see a hive. I see a living, breathing boy who has been hurt and who needs our help." - Dr. Crusher

"Captain, I do not want to forget that I am Hugh." - Hugh to Picard, before beaming back down to the crash site

I don't have it on hand to get more quotes, but the end of this episode centered around the ethics of using a person as a weapon - something no one was willing to do, regardless of whether or not they could find Hugh again.

30
Why did the Borg never bring waves of ships to the Alpha quadrant to conquer it?

13
Do the Borg really only assimilate civilisations, not individuals?
14
Why can Picard still hear the Borg?
10
In ST: "First Contact" why weren't the Borg able to differentiate Picard and Lily from the other characters in the holodeck?
8
Why was Picard so comfortable with his nephew?
9
Why didn't the Borg drones in "Regeneration" become individuals?
9
Why did the Borg use a cutting beam in "Best of Both Worlds" part 1 act III?
9
Was Geordi and Data's "invasive program" to annihilate the Borg ever attempted again?
9
Why were only Jean Luc and Guinan so outright hateful to the Borg ("I Borg")?
2
Did Picard violate Article 14, Section 31 of the Starfleet Charter?