How could this be the first time Percy Jackson learned he could do this?

Be able to healed by water

When Percy Jackson is in Camp Half-Blood he is role-playing a battle against another team as a training exercise. Just as he is about to get to the final goal he gets into dual with Annabeth Chase. She beats him down and he is injured. A voice (which turns out to be his father, Poseidon) tells him to go to the water, where he uses the water's power to heal himself.

Going along with the story of the movie, it certainly seems that this is the first time he does this as Percy himself is surprised.

But, I am sure growing up he would have hurt himself before and just taking a bath or even going for a swim would have healed any of his injuries big or small. Surely he would have realized this long before going to Camp Half Blood?

Demigods don't have their full powers until they're acknowledged by their parents.

The problem here is that when adapting the film from the books, they (sadly) cut a few important things, including explaining why Percy wasn't able to heal himself with water before this point and why he didn't know about his other abilities earlier.

The short answer is that demigods don't have their full powers until they're acknowledged by their parents. It was only when Percy fought against worthy opponents (other demigods) while standing in water that he was fully and officially acknowledged by his father Poseidon. 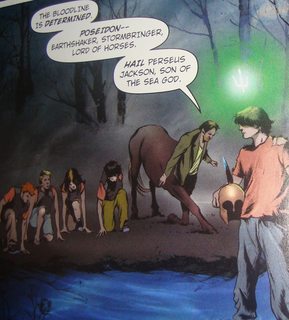 ‘Look, I – I don’t know why,’ I said, trying to apologize. ‘I’m sorry…’ But they weren’t watching my wounds heal. They were staring at something above my head.
‘Percy,’ Annabeth said, pointing. ‘Um…’
By the time I looked up, the sign was already fading, but I could still make out the hologram of green light, spinning and gleaming. A three-tipped spear: a trident.
‘Your father,’ Annabeth murmured. ‘This is really not good.’
‘It is determined,’ Chiron announced.
All around me, campers started kneeling, even the Ares cabin, though they didn’t look happy about it.
‘My father?’ I asked, completely bewildered.
‘Poseidon,’ said Chiron. ‘Earthshaker, Stormbringer, Father of Horses. Hail, Perseus Jackson, Son of the Sea God.’

Percy Jackson and the Lightning Thief

Water is soothing. Most injuries you get aren't something you really notice healing up unless they are severe, especially as a kid. You'll notice having a scratch or a bruise and then forget about it. By the next time you remember it's gone. It's not something you or anyone else is going to notice. And the things that someone might notice, like severe bruises or things that stay around... Some people don't bruise easy and they heal quickly when they do so, again, not something you're going to notice or think is odd. Things that stick around for a while, like bug bites, most people just ignore and if you've never had them you wouldn't think it's odd.

You might hear someone complaining they get bitten all the time and you'll comment that you don't or something and you and they'll pass it off as just luck, not magic powers of healing.

So... Yeah, if he hasn't had any severe lacerations or other major injuries, which he likely hasn't, it is completely within the realm of possibility that he and others would not really ever take notice.

Not the answer you're looking for? Browse other questions tagged percy-jackson or ask your own question.