How can the Jaffa see out of their cobra headgear?

The Jaffa's "cobra" headgear rests high on the wearer's head, and the eyes of the wearer appear to be about midway up the cobra helmet's neck. At first I thought maybe they can look through an opening in the snake's mouth or something. But as you can see in this collage of screenshots showing the helmet opening, pic #3 clearly shows Teal'c's eyes obscured by the neck armor until the neck part slides down further to reveal more of the face. 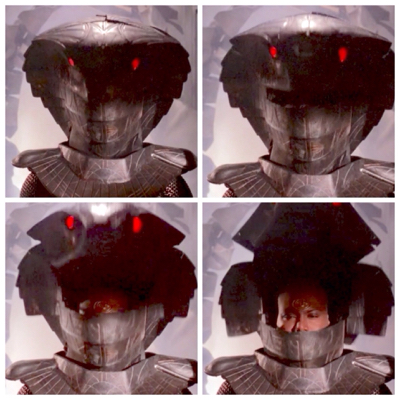 How can anyone see anything out of the helmet when it is closed, let alone give any tactical advantage even if they do somehow have limited sight? I always felt any fear/intimidation of the headgear was vastly outweighed by how unpractical it is in battle.

After looking around a little... The concensus seems to be that for the actors there is a slit between some of the plates that can be seen out of. Looking at pictures in the Question it looks like that wouldn't work at first glance, but look closely at them between the upper left and lower left the bottom piece has move around 2 inches I'd guess. If you were to match the distances up I would bet that the slit is in the exact same position as Teal'c's eyes when you return all the length that disappears.

As far as in-universe. There are several conflicting answers, but the most likely is that there is that the eyes work as cameras and projects a holographic display in front of them or the material is such that it's somewhat like a one-way mirror. The former is more likely what the creators envisioned. The latter is what would be aimed for in reality, because the former would really take some getting used to, if they could at all.

Of course there is also the possibility that there is no other tech involved and in-universe they just look through the slit. Helmets that Knights wore often seem to have ridiculously low visibility to us, but they still worked.

There is one scene in one episode where you get a view from inside of the helmets. Unfortunately I can't find it as I don't know what season it was or who it was but I can tell you that they work a lot like a periscope would on a submarine. With the eyes being where they see from and then that is then reflected down to where there eyes are.

Not the answer you're looking for? Browse other questions tagged stargate stargate-sg1 jaffa or ask your own question.

39
How can a person “Hold a stargate open” with their arm?
14
How could the Tollans get through the SGC iris with their phase shifting technology?
32
Why didn't SG-1 bring more Jaffa weapons back through the stargate?
35
How does the Stargate Wormhole know whether it can close itself, or if there are more people coming through?
6
Why do the symbols on Jaffa foreheads differ?
6
How can the identification code be received before the wormhole is created?
11
Why didn't the Asgard use their own beam weapons?
17
What is the Jaffa armour made of?
11
What was the out-of-universe reason to destroy this race?
1
Why didn't the Tok'Ra clone their Queen/themselves?