Who sent Ser Barristan the pardon for Jorah Mormont?

Who really sent the pardon to Ser Barristan?

I would like to add some thoughts that have been brought up in the comments.

Some people are saying it is a prop continuity and that is entirely possible. But, at this stage there is nothing to suggest why the two seals are different (At least we can agree that they are two different seals). Not to mention that the shots of these seals are not passing glances, they are close ups, to show the audience exactly who's seal it is supposed to be. To add a Seal is like an emblem atop a government document, it is used to authenticate the document.

A seal is a device for making an impression in wax, clay, paper, or some other medium, including an embossment on paper, and is also the impression thus made. The original purpose was to authenticate a document, a wrapper for one such as a modern envelope, or the cover of a container or package holding valuables or other objects.

Also Could this possibly be a plot twist? It was Ser Barristan who told Daenerys in the book, could this be just an act by Ser Barristan to look surprised that he was given the pardon for the audience. Ser Barristan and Jarah have been at odds ever since he joined the campaign of Daenerys, so he could of had the document made to look like it came from the hand (a royal pardon needs to come from there or the King himself).

My point is, people have resigned to the fact that it was Tywin and although that seems to be the case, in a show which is know for using visual aids as a means of informing the audience of a plot. These two seals being different deserves the question as to who gave Jorah the pardon. And if there is any evidence other than what has been given in past threads and the one linked, I am sure the question will be able to be answered.

Who really sent Ser Barristan the pardon, because it was not Tywin Lannister. In this question an answer says:

This is a show-only event, and it is a direct consequence of it being impossible to show Ser Barristan joining Daenerys incognito without the viewers realizing the deception. In the books, it was Ser Barristan who revealed Ser Jorah's betrayal. In the show, it was Tywin who did it by sending an official pardon to Daenerys -- thereby betraying Jorah and weakening Dany by sowing discord between them. The show and the books have been forced to deviate from each other here, mostly because watching is different from reading. I'll try and relate both perspectives briefly:

This seems to be incorrect, because as I understand it each person has their own special seal to seal their letters so that people know they are not forged.

However, taking a closer look at the seal, it is not Tywin's (The Hand's) seal. So we can assume that this information is incorrect as the seals do not match and there does not seem to be anything in the books to say otherwise. So the answer to the question in the linked thread is therefore incorrect.

To get the most accurate facts of what Tywin's seal looks like, we have to go back to Season 3, Episode 1, "Valar Dohaeris", where Tywin is talking to Tyrion and he pours wax onto a letter and seals it with his seal: 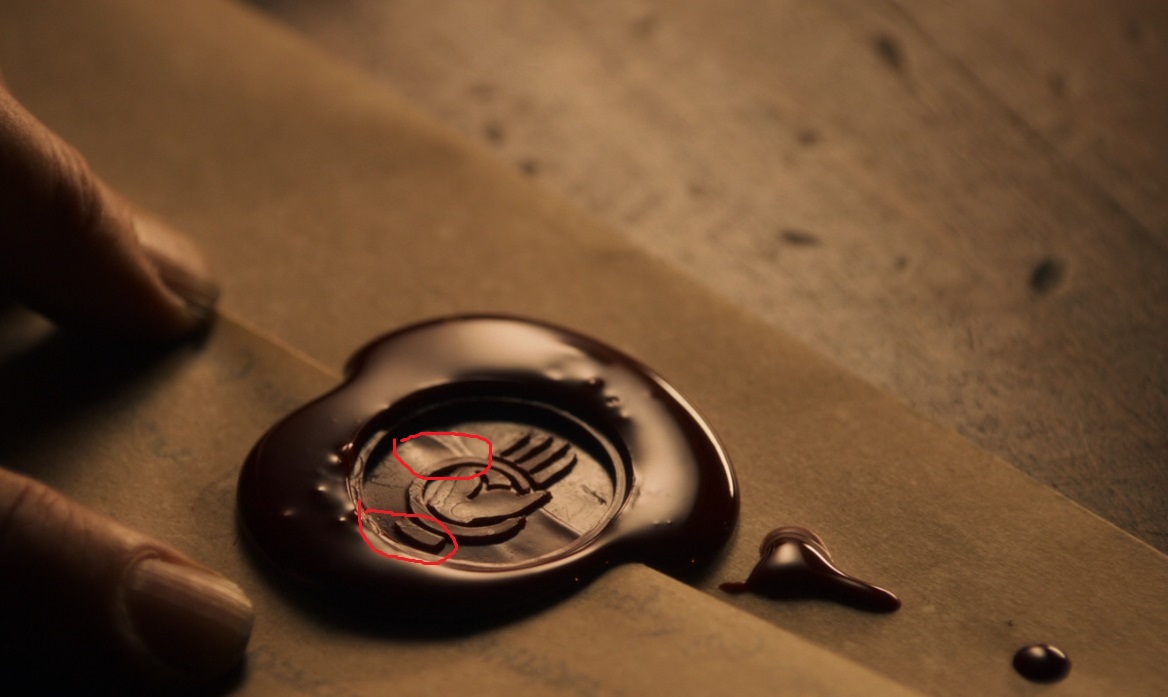 The characteristics are quite clear, it is very square and basically is just a symbol of "the hand" with a bar underneath it.

Then in Season 4, Episode 8, "The Mountain and the Viper", we see Ser Barristan handed a letter from a child and he asks "Who sent you?", he does not answer, Ser Barristan turns over the letter and the seal is shown: 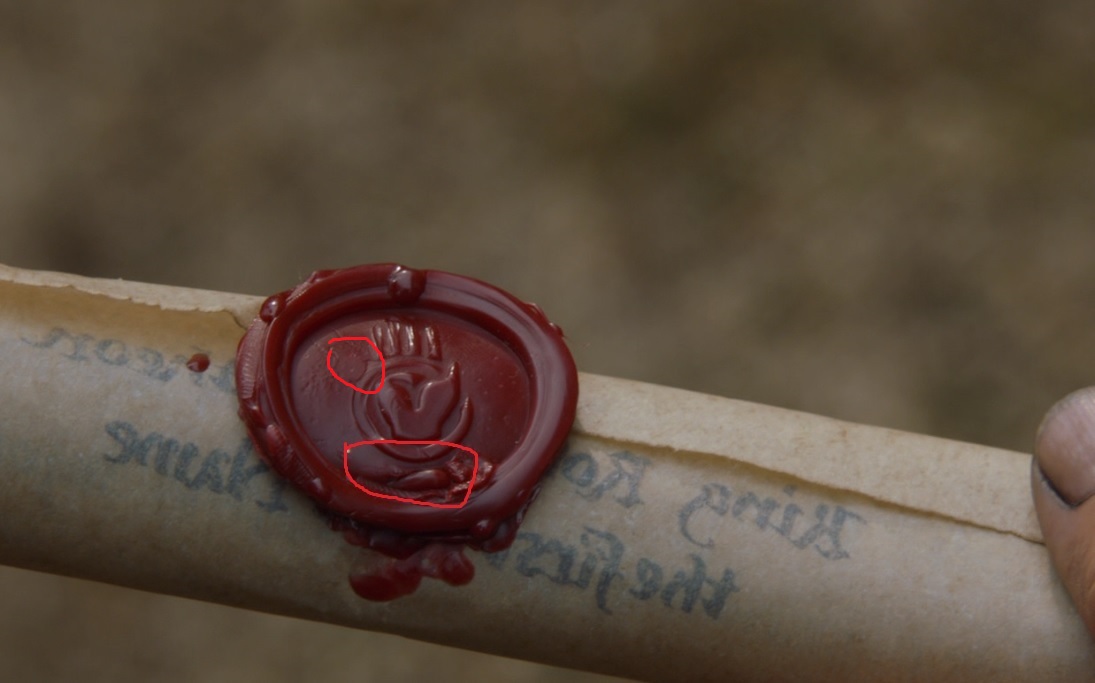 Comparing the seals, as pointed out, the second one seems disfigured. Even if it was (disfigured) the space between the the under-bar and the circle of the the hand seal is too far away. Also the second seal's attributes are too round, compared to the first seal. Clearly this is a different seal.

Clearly the seals are different, there is a little bar underneath the hand symbol on Tywin's seal and this seal does not have that. So was this a setup by someone else other than Tywin? Or are we to believe something else is at play here?

BTW, I live in Japan which is a society of stamps instead of signatures. We have one stamp and the is the be all the end all, we call this a Jitsuin.

To answer the question I need proof that the two seal are in fact the same.

There is no evidence that Tywin did not send the letter to Barristan. In fact, there is a scene that lends credence that it was Tywin trying to breakup Daenerys' council.

The Small Council is discussing updates regarding Daenerys. Varys informs the Council that she has taken Mereen with army of Unsullied and Jorah Mormont and Barristan Selmy.

Pycelle: Mormont is spying on her for us?

Varys: No longer. He appears fully devoted to her.

Tywin (to Varys): Can your little birds find their way into Mereen?

Varys: Most certainly, my lord hand.

Tywin: Lord Tyrell, be a good man and fetch my quill and paper.

For an in-universe explanation; my thought is that the seals looks different because the seal we see in the scene where Tyrion is asking for Casterly Rock is a fresh seal, just made. While the seal we see on the letter to Ser Barristan has traveled halfway across the world and been subject to the elements for weeks (if not months). This may caused the seal to lose some it sharper more defined features.

As for out of universe... it could be simply that the original prop from Season 3 was lost, damaged, or otherwise not available and a new prop was made and did not have the quality as the first one.

You are reading an incredibly large amount of plot twist into a tiny prop department mistake.

It's pretty obvious that the intent of the writers is that Jorah was pardoned by Tywin as a way to discredit him and weaken Danaerys. We even know exactly when Tywin wrote the letter.

In Season 4 Episode 6, Tywin is talking with the small council about the threat Dany poses to Westeros. Someone brings up Jorah, and the fact that he's no longer working for Westeros anymore. Tywin then asks for a quill to write a letter, and asks Varys how quickly he can get something to Mereen. This is clearly intended to be the letter Selmy gets two episodes later.

The fact that the seals are slightly different is a non-issue. These seals are hand-carved onto wooden pegs -- they don't last forever, and they certainly won't all look the same. The almost trivial explanation for the extremely minor differences in look is that Tywin's seal from Season 3 broke and someone carved him a new one.

In the seventh episode, the Small Council discusses Daenerys and her advisors- Ser Barristan Selmy and Jorah Mormont.

It is implied that Tywin asks Varis to if he can still get word to people in Mereen and that Tywin sends some sort of message, we are not told what that message is.

In season 3 Episode 5 you can see Jorah trying to sus out Ser Baristan, as to if he new anything about Jaorahs part in informing to the small council and betraying Daenerys. Ser Barristan could well have sensed this and ploted to tell in good time Daenerys.

But, we still don't know who really sent the pardon.

The seals are clearly different and at this stage we do not know if they are a prop error of Continuity as explained below,

In fiction, continuity (also called time-scheme) is consistency of the characteristics of people, plot, objects, and places seen by the reader or viewer over some period of time. It is relevant to several media.

Continuity is particularly a concern in the production of film and television due to the difficulty of rectifying an error in continuity after shooting has wrapped up. It also applies to other art forms, including novels, comics, and video games, though usually on a smaller scale.

So we may have to wait to see who the actual person is or if in fact it was just a prop error.

7
Was Jorah pardoned twice?
7
Could Jorah Mormont have a claim for being Lord of Bear Island again?

4
How could Ser Jorah Mormont "find out" about the Second Sons?
40
Are the Lannister siblings really who they say they are?
10
Who were the wise master of Yunkai's "powerful friends"?
2
Importance of sealing scenes of Tywin Lannister
11
Why the change of name of Ser Robert?
11
Who were the Kingsguard escorting Cersei?
29
What if Ser Jorah Mormont had cut off his arm?
13
Does the show ever make clear which dragon is Viserion and which is Rhaegal?
8
Why are members of the Kingsguard allowed to fight in battles and tourneys?