Who was the Goatee Man in “He Never Died”

It's made clear in the film He Never Died that most people can't see the Goatee man, although our Hero seems him at various 'significant' points. When the Hero rants at him, he includes the statement that 'There is no God' so we can assume he's not meant to represent God. At the very end, he speaks (for the first time) with a rather demonic sound.

But I still am not sure who or what he's meant to represent -- the Devil? (he's at some of the nastier scenes, but ALSO at a few harmless ones.) Death? (He there for a few killings, but not all of them, and a few of his appearances are not accompanied by a death.) One of the named angels, perhaps?

I've seen a few interviews talking about the main character, but haven't seen any clear explanations as to what he is.

[Since the main character is a figure from the Christian bible, biblical info is within the scope of logical answers.] 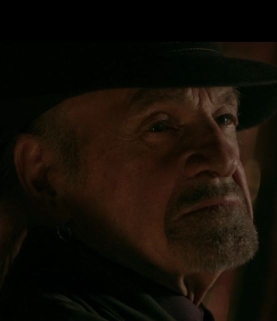 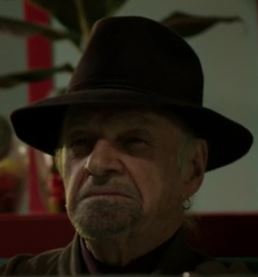 My guess is that the goatee man is Samael, the Angel Of Death.

Although the Christian Bible represents Cain's Father as Adam, the Jewish text infers that an Angel seduced Eve. Most likely Samael (aka "The Seducer" and "The Destroyer") is the culprit. This corroborates with the scars Jack displays on his back in the beginning of the film. It would be evidence of Jack being Nephilim, or "Half Angel".

"CalEd" posted on the article this:

I was at the screening with the director and Henrry, someone ask who the Goatee man was, they said its up to you to decide

If that is correct, it appears to be one of those intentionally-left-vague plot devices. You may not be able to get a "right" answer.

It's God watching Cain go through his punishment, checking in on him occasionally to make sure he is still wandering the earth. Antagonising him, not speaking to him to further fuel the reason he killed able, (neglecting Cain and giving attention to able) It's part of his punishment. Also anyone that tries to kill Cain will suffer a fate 7 times worse, which I assume was about to happen to the guy at the end, at the hands of god.

The Goatee Man is Kronos. The Gatekeeper of Time. Notice how Cain throws the clock at the wall when his daughter asks about him.

How about death himself? Being as he'd be the one that could let jack die....in the end he's begging him to "let me die" he refers to God as "she" so goatee man isn't God. The devil/Satan theory is plausible to me....but I think death fits better.. no evidence just my opinion...loved the movie though!

I do not know, but if I had to make a guess it would be the devil or God. The reason it could be the God. Kain rants on about why he is not allowed to kill the man. He then says why will you not let me die and God does hold the keys to death. He then goes back and rants about him killing Abel, as he had God's favor. If you go by the Bible, God's voice was like thunder or was a whisper. The man sounded like his voice was thunder. Then if you look before that the flaming drink. When God came to Moses, he used a flaming bush. If you just go back to the rant he is trying to agitate the man to get him to kill him. Only someone like God could lift his curse and kill him. Now the reason why it could be the devil. If you go back to the start of the movie, you see 2 scars on Jack's back. They looked like cut wings scars. Jack aka Kain could have been a Nephilim. Then if that is not enough, how about that scary voice, the way the old man looked at Alex, that looked pretty evil. Then there is the devil is evil and would rather torture people then give them what they want. Making someone live forever, drinking their blood is pretty evil.

I assumed he was God because he ignores Jack, and that is what angered Cain in the first place and made him want to kill Able.

Not the answer you're looking for? Browse other questions tagged he-never-died or ask your own question.