What are the relative ages of the next-generation Weasleys?

The epilogue to Harry Potter and the Deathly Hallows introduces several members of the next generation of the Weasley extended family. Not long after, J.K. Rowling released a family tree, including names not mentioned in the epilogue: 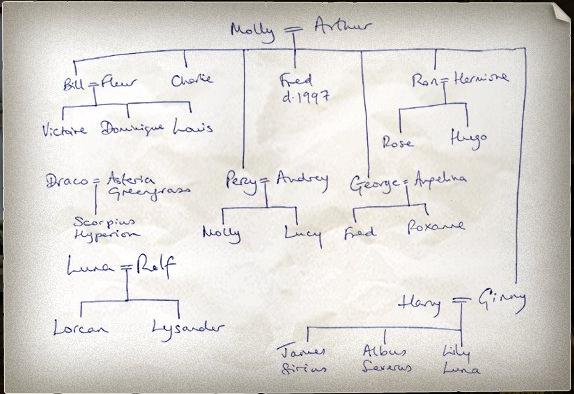 This family tree does not include any ages or dates of birth, however,

Using the date of the epilogue (September 1, 2017) as a reference point, how old are each of the next-generation Weasley children?

There's some information available on HP Lexicon's page on the Weasleys:

And their page on the Potters:

For information on the rest, I've had to resort to the notoriously unreliable HP Wikia:

That covers everyone, and it seems to be all the information currently available. Naturally we know more about the children of the main heroes (Harry, Ginny, Ron, and Hermione) than about their assorted cousins. This article from the Times may possibly go into further detail, but I'm unable to view it without opening my wallet - if anyone has already subscribed to view articles on the Times website, please leave a comment to let me know of anything relevant I can add, or post a competing answer if there's enough extra information there to warrant it.

Not the answer you're looking for? Browse other questions tagged harry-potter age or ask your own question.

26
In what year does the epilogue of Deathly Hallows happen?

29
Did the Harry Potter supplemental books contain clues relating to the main storyline?
48
Did Draco Malfoy Demonstrate Any Level of Redemption By the End of the HP Series?
5
Does J.K. Rowling Favor Halloween as a Date of Death?
27
How can a Seeker practice if the Snitch can't be touched prior to a Quidditch match?
22
Who are these characters at the end of Deathly Hallows, Part 2?
52
Did J.K. Rowling give two or more unrelated characters the same first name in any of the 10 books?
20
Are Harry Potter and Ginny Weasley Distant Relatives?
15
In Harry Potter and the Cursed Child, why would anyone believe this rumor?
5
Has JKR killed off any characters outside of book/movie canon?
11
What happened to Fred's hand on the magical Weasley clock after Harry Potter and the Deathly Hallows?