I am trying to remember the name of a book I read back in the 1980's about a guy who carried a singing sword named Lark.

Does anyone remember this story or sword?

I believe this is actually the Saga of Thorgrim, by Gerard Earl Bailey.

There is a lay the Agelings sing: of Thorgrim the glacier-born, who was outlawed strode the sea on cross-grained ships of war; of Lark, the blood-loud sword that led his quest for the Spaehelm that was to be his destiny; and of the Priestess Lysenoe who was his fate. All this was when the world was new and men did not walk it alone. Here then is that song... Sword of the Nurlingas.

The main character is a viking-type who carries a sword (named Lark) which is black or gray metal with a rounded guard. The sword didn't 'sing' as such, just vibrated and made a distinctive noise as it was used.

The cover of the first book, Sword of the Nurlingas, shows the character holding up the sword. 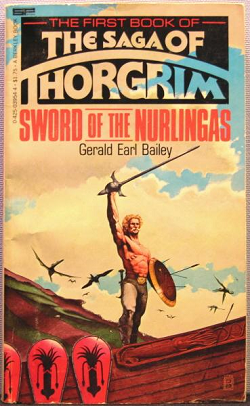 12
Childrens fantasy, blind monk leading boy who can control the elements
9
Comic story early 80s with a giant blowing head
16
Fictional graphical "history" of spaceflight book from early 1980's that covers the years 2000-2100
15
Sword in the Stone story where the sword was held in place by electromagnets
26
Futuristic Cartoon from 80s-90s