Why are so many things in the Alien series named after Joseph Conrad works?

The mining ship in Alien is the Nostromo. Nostromo is a novel by Joseph Conrad.

The ship in Aliens is the Sulaco. The mining town of Sulaco is the setting of Conrad's novel Nostromo.

The ship in Alien3 is called the Patna, after a vessel in Conrad's Lord Jim.

Why are there so many references to Conrad's works in the Alien franchise?

By all accounts, the ship names subsequent to the names in the first movie are named that way to continue the "tradition" of the names of the Nostromo and the Narcissus, and the Nostromo was named first during pre-production for Alien. Also, the name "Nostromo" pretty much has to be Conrad reference, while "Narcissus" could just be a Greek mythology reference.

So we can recast the question to, "How did the Nostromo get its name?" So many secondary sources on the Internet claim that Ridley Scott himself named the Nostromo. All sources that mention previous names list "the Snark" as the original name given by Dan O'Bannon, and some sources mention "the Leviathan" as an intermediate name used for at least part of pre-production.

Only one primary source I could find credits anyone with the name of Nostromo. The November 2004 issue of Film International (PDF download) has an interview with Walter Hill, one of the producers for Alien. During the interview he said the following about names:

David had suggested making the captain (Dallas) a woman. I tried that, but I thought the money was on making the ultimate survivor a woman - I named her Ripley (after Believe It Or Not); later when she had to have a first name for I.D. cards, I added Ellen (my mother's middle name). I called the ship Nostromo (from Conrad: no particular metaphoric idea, I just thought it sounded good). Some of the characters are named after athletes: Brett was for George Brett, Parker was Dave Parker of the Pirates, and Lambert was Jack Lambert of The Steelers.

After reading the whole Alien section of the interview, it does occur to me that Hill could be intentionally or unintentionally mis-remembering some of the history of the Alien script. To hear Hill tell it, he and David Giler (another producer on Alien) practically gutted O'Bannon and Shussett's script and rewrote it several times themselves before creating a version that Fox would buy, but somehow the Writer's Guild wouldn't allow either of them to have any writing credit. That latter fact could be Hollywood politics and protection of writers by the Guild, of course. Also, Hill seems to say that their re-writes were what convinced Fox, while other sources say Fox finally jumped on it after seeing the success of Star Wars, and the latter explanation is insanely more plausible.

But aside from Hill characterizing himself as the savior of the things he works on, there is the question of the name Leviathan. The accounts of the history of the name Nostromo seem to indicate that at the time Fox bought the script, the name was still Snark, and that pre-production work was going on regarding the design of the ship (and the alien and all the other elements) while other names, including Leviathan, for the ship were being considered. There is a Chris Foss drawing of an early design for the ship with "Leviathan" written on it: 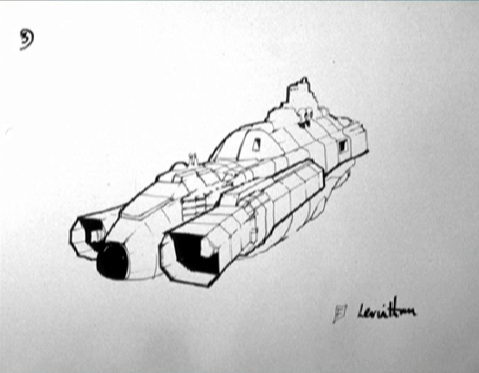 Another important fact is that the first film Ridley Scott directed, The Duallists, was based on a story by Conrad (credit to Valorum for that find). Combined with the evidence of names used after Fox bought the movie and prior to the first use of "Nostromo" makes me quite skeptical of Hill's claim. I think it most likely that either Scott brought the name in with him, or someone knowing that Scott had a history or liking of Conrad suggested it.

Not the answer you're looking for? Browse other questions tagged alien-franchise joseph-conrad or ask your own question.

54
Do we know where Ridley Scott got the idea for the xenomorph inner-mouth?

17
Why didn't the crew detect the Alien inside of Kane?
18
Are the aliens from the Alien movie series more hive minded or more like individuals?
26
In the Alien series, what is the meaning of the “LV” designation for planets and moons?
13
Why did the Engineer eat the alien substance?
3
What are the possible ways to get infected with an Alien
8
Why Are Synthetics in Alien So Advanced?
1
In the Alien series, how did the aliens get off their home planet?
12
Are the android names in the Alien franchise in alphabetical order on purpose?
4
How can the engineer be fossilized in Alien when it only occurs 20 years after Prometheus?