Why does Green Arrow hate Batman?

In the 'Under the Hood' arc, in Batman #639, Batman goes to Star City to ask Green Arrow about his resurrection.

Green Arrow displays hostility. After their conversation, Batman says something like:

Why do you hate me? I know it couldn't be something I did to you. You're not that shallow. So it must be something you did to me.

After that, Batman leaves. As he's leaving, Arrow hangs his head and says "I'm sorry", presumably to himself as he remembers what Batman was referring to.

Could anyone tell me which incident is being referred to here? And which issue(s) did it take place in? 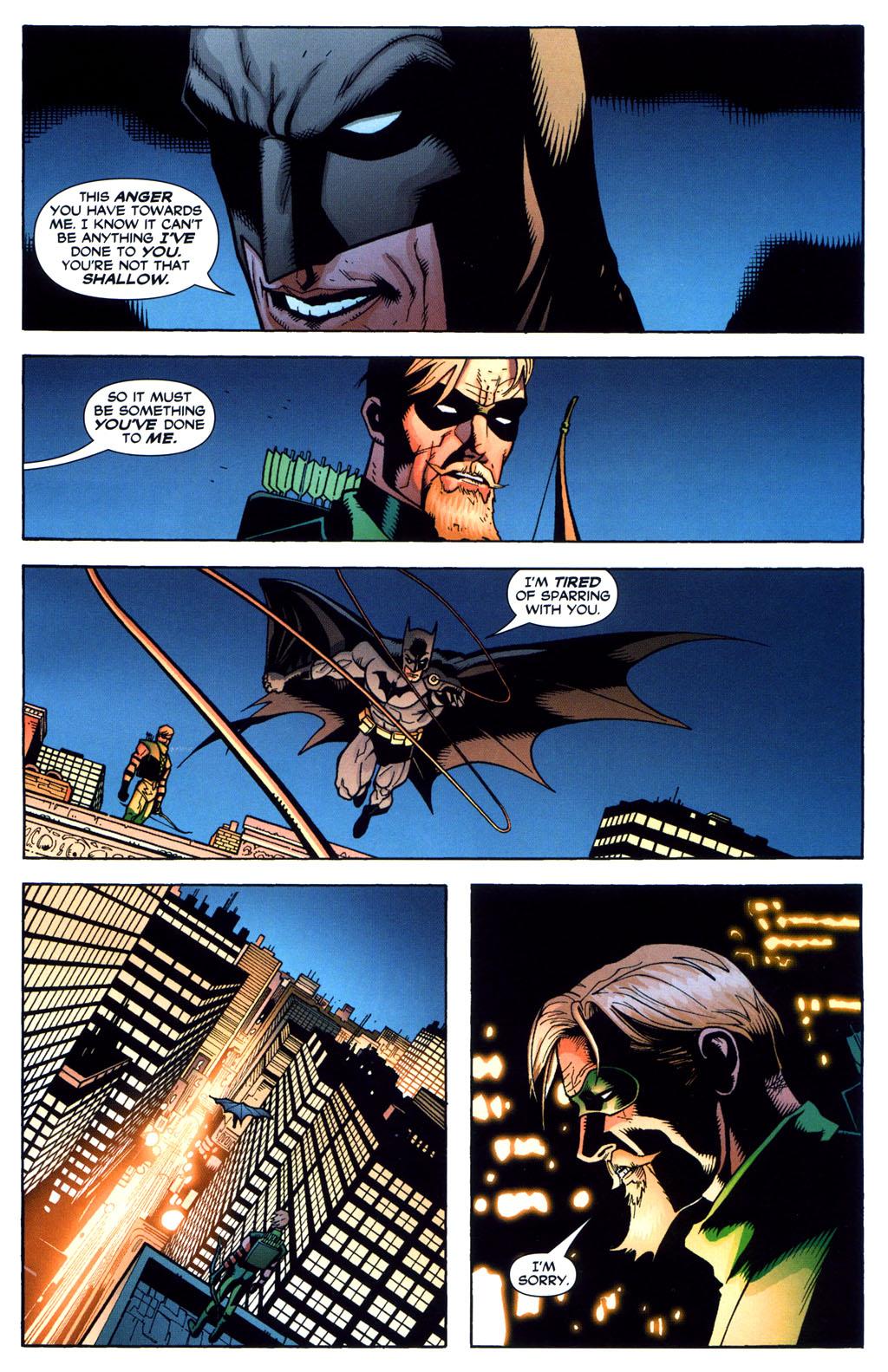 The general consensus so far by people on the internet seems to be that it's about the Identity Crisis, when Ollie and several others had Batman's memory erased.

Wally West questions Green Arrow again after accidentally seeing a snapshot of the battle on the Satellite in Light's mind, which reveals that Batman was also present. Green Arrow confesses that Batman had left immediately after the battle, but soon unexpectedly returned just as the mind wipe was taking place. He disapproved this and nearly attacked the other heroes; he was magically restrained and his memory of the incident was removed.

Green Arrow and Batman always have had that sense of tension, years before the retro story in "Identity Crisis." Some of it is philosophical.

Green Arrow is less reactionary than the other members of The Justice League. Green Arrow is not above using lethal force to take out villains such as Prometheus. He also has shown trying to deal with higher-level social concepts, such as racism and drug wars. He sees The Justice League as being able to do more on the street with their superpowers and abilities.

Batman, on the other hand, is an authoritative figure when it comes to dictating to other superheroes. Batman sets rules for other members of The Justice League and another set of rules for himself (like leaving and not joining in missions when he feels like it). Green Arrow is much more of a free-flowing person who chafes under such restrictions, and is one of the few Justice League members who stands up to Batman's selective dogma.

In some ways, Green Arrow sees Batman as self-serving and hypocritical -- he knows how life is for people in crime-infected areas yet does nothing to stop corruption until it reaches a certain stage. For instance, Green Arrow is someone who would try to kill The Joker, especially given how much pain The Joker inflicted on Gotham City and Batman personally. Yet Batman continually repeats locking up The Joker in Arkham Asylum and waits until he escapes again.

Additionally, some of that contempt is based on how similar they are to each other. Batman and Green Arrow are street-level superheroes who use their skills and resources to fight crime and address villains the more powerful heroes rarely address. Both men are stubborn with complicated relationships with their respective inner circles.

However, when it comes to certain situations Batman shows he will trust Green Arrow. They seem to have a begrudgingly mutual respect. In that context, they are an example of two people who don't get along because they see too much of themselves in the other person.

It's definitely Identity Crisis. In a later story arc of JLA (starting in #115) Batman teams up with GA and others from the mind wipe incident and he and GA hash it out a bit more. I don't think it's resolved in the story. The only person I know Batman actually resolves his anger towards regarding the incident is Zatanna. He saves her life in a Detective Comics story line she appears in and they talk about it and settle things as friends.

It definitely refers to Identity Crisis. Batman understood that for the safety of them and their loved ones, sometimes the JLA had to resort to wiping someone's memory of their identity to keep things safe. He was FINE with Zatanna wiping Dr. Light's memory of Elongated Man's wife (he'd broken into the Watchtower to steal back something they'd taken from him and found her, and decided to get back at the JLA by raping her. They got her distress call too late and arrested him but he promised he'd come after her again. While Batman was gone they decided that the only way to keep Dr. Light from offending again was not just to take his memory but alter his personality to make him less dangerous.

Batman walked in while they were doing this and tried to stop them, so Zatanna wiped his memory of it so he wouldn't know what they'd done to Light. However, with Bruce being Batman, Oliver knew that sooner or later Batman would realize something had happened, and would know that Oliver knew that he knew. I believe that's what's being referenced. Ollie his hostile towards Bruce because he feels guilty for letting it happen when he was against it, and Bruce knows that.

15
How does Batman fight magic?
16
Where do Green Arrow and Hawkeye get their arrows?
30
What are the differences between Hawkeye and Green Arrow?
4
Prior to the CW tv series, has Felicity Smoak had any interaction with the Green Arrow?
1
Why does Harvey Dent hate Bruce Wayne?
6
Did Green Arrow ever acknowledge Batman as a "role model"
1
How did Green Arrow find and access Prometheus' lair?
10
Does Batman have an AI assistant like JARVIS?
2
Has the Green Arrow gone on a different planet?