Ask Question
Asked 5 years, 6 months ago
Active 5 months ago
Viewed 484 times
8
This question already has an answer here:
Sci-Fi Drama TV Series about telepathy between an alien and a boy (1 answer)
Closed 5 months ago.

This was a live-action SF show I saw during my childhood in the early 1980s, so it could be a repeat from the 1970s. It was on UK TV, but that doesn't necessarily mean its a UK production.

The (unfortunately few) points I can remember are:

Are you by any chance thinking of Chocky?

There were three series made; the first was 1984, so it fits with your timeline.

My memories of it are somewhat hazy, but it all seems to be on YouTube. This is from season 2 (1985, according to Wikipedia)

If you start at 24:00 you can see someone smashing a model that is made up of spheres and pyramids on a flat base.

I know Chocky was invisible, and that the kids got special powers from him, though I can't remember what powers. I've no idea whether there are radio telescopes involved, though.

I think it's Chocky's Children the middle serial of the three

Whilst on holiday, Matthew Gore, central character of the first serial, meets Albertine, whom he realises is influenced by the same alien as himself. But when he tries to explain this to her, she thinks he is accusing her of plagiarism, gets angry and breaks off their budding friendship. Matthew gets upset and smashes up the clay model of Chocky's world which he has made under her influence.

IIRC the radio-telescopes figure in Series 3, when Albertine is somewhat older and has gained a scholarship to a top university.

If there was a village set among prehistoric standing stones the show was probably Children of the Stones (1977).

The series followed the adventures of astrophysicist Adam Brake and his young son Matthew after they arrive in the small village of Milbury, which is built in the midst of a megalithic stone circle.

It's a bit of a stretch, since it's definitely more adult than a kid's show, but Quatermass (1979) was a TV serial, sometimes known as the Quatermass Conclusion or Quatermass IV. Professor Quatermass is investigating a cult of "Planet People" who are gathering at prehistoric sites to be transported to other planets. A radio telescope is constructed and used by one of the scientists to track the aliens. I have not found any references to powers or to a model. Still, it's the closest match I've found so far. 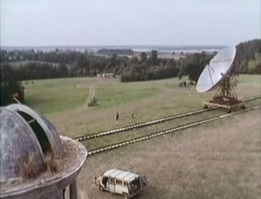