It's the early to mid 1980s. A group of us are members of a school movie club -- once a week we get to stay late after school, take over the commonroom and watch a movie of our choice.

The group has some eclectic tastes, and we've all seen the blockbuster films in the cinema already anyway, so in the club we often end up watching the weirdest, wackiest, low-budget stuff that we could find in the bargain basket at the video rental shop.

This particular week, we have a sci-fi spoof movie. It is spectactularly awful: even set alongside the other junk we'd been watching, this one was so bad it actually stopped getting bad and started getting good again.

It featured a bad-guy character who was clearly a spoof of Darth Vader, but with a black tubular helmet that was probably fashioned by the props department by rolling up a piece card and taping it together.

It also featured a 'princess' fleeing from the bad guy. Somehow or other they arrive on Earth. In one particularly moving scene, she runs through someone's living room and shoves a cylinder vacuum cleaner across the floor into the path of the chasing baddies. They then spend time pulling it apart, believing it to be a droid containing vital secrets. (I can't imagine where that plot device came from...). We are later treated to a scene of a group of short aliens rummaging among the dust bunnies that they've extracted from the "droid".

As I say, it was an awful film, but annoyingly it has stuck in my memory. Or at least, a few random bits of it have. But I can't remember what it was called, or who was in it, or indeed most of the plot. And that's what's bugging me. I just can't get it out of my head, and I need to move on.

So I'm asking for help from the movie identification experts here. If you can help me to remember, it might help me to forget. :-D

[Note: Before you even suggest it, this is most definitely NOT Spaceballs]

EDIT: Walt clearly has it right with Hyper Space / Gremloids in his answer. Leaving mine for posterity, but go upvote that answer instead.

Could this have been Star Odyssey, the 1978/1979 (sources differ) Italian film also published as Space Odyssey, Metallica, Captive Planet, or informally "Italian Star Wars"? With several VHS releases evident online, it would probably have been a prime candidate for a bad movie night in the mid 80s.

It's a full-length film (1hr 43min) known for being low-budget and awful, it contains a tubular black card-stock costume for a Vader-inspired villain, and much of the movie is spent in a house on Earth.

The entire film is apparently public domain, and is hosted on archive.org as well as several YouTube uploads. 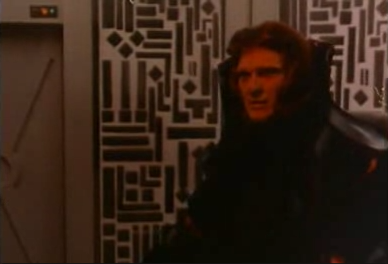 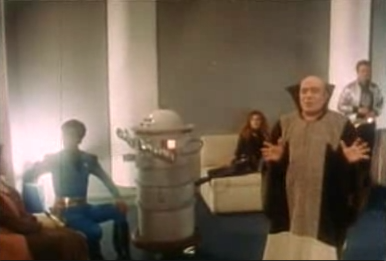 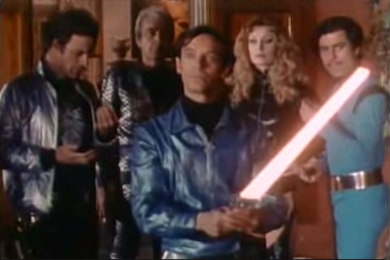 Don't know if you're still around, but you're actually looking for Hyperspace [whoa, deja vu :P], AKA Gremloids, a low-budget Star Wars spoof from 1984 starring a young Paula Poundstone and Chris Elliott. And that Vader-like villain wearing a black tubular helmet? That would be Lord Buckethead. Yes, that Lord Buckethead. This film is actually the origin of that satirical political figure, his costume and his party.

In the film, Buckethead lands on Earth looking for princess Serina and some vital plans she might have, and mistakenly thinks that human Karen is that princess and that a wet/dry vac in her repair shop is a droid containing those plans. His short robed minions (which are basically Jawas) eventually apprehend the vac and go over its contents which comprise of dust bunnies, some crackers and hilariously(?) a pair of dentures, as Buckethead angrily demands they find the plans hidden within it.

Below is a clip from the movie (with some dazzling special effects) where the characters mess around in a supermarket (and just for the hell of it, here's an article about a recent copyright feud concerning Lord Buckethead and this film):

"Hardware Wars is a 1978 short film parody of a teaser trailer for the science fiction film Star Wars. The thirteen-minute film, which was released shortly after Star Wars, consisted of little more than inside jokes and visual puns that heavily depended upon audience familiarity with the original.[editorializing] The theme song is Richard Wagner's famous "Ride of the Valkyries". The tagline was "You'll laugh, you'll cry, you'll kiss three bucks goodbye."

Here is a video:

8
70s/80s SciFi film (or series episode?) where a spaceship has only one rescue capsule, so the crew members start killing each other