Can the One Ring change in size?

Does the One Ring change size with its bearer?

Being that the ring is magical, does it conform to the ring bearer's hand size?

In the very first battle scene Sauron get his fingers cut off, then Isildur picks up the ring and it lays in his palm.

In this scene the ring is huge, even in the hand of a human: 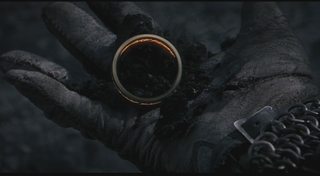 But then you see Bilbo Baggins hold the ring, it is much, much smaller. BUT, remember, Bilbo is a halfling and is supposed to be half the size of a human: 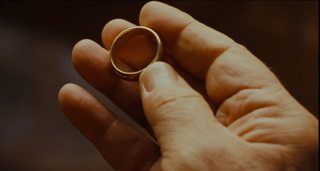 There is a distinct size difference in the ring, does it change size with its carrier? Being that it is magical I can see that this could happen.

Yes. At the very least, it seemed to.

‘Bilbo knew no more than he told you, I am sure,’ said Gandalf. ‘He would certainly never have passed on to you anything that he thought would be a danger, even though I promised to look after you. He thought the ring was very beautiful, and very useful at need; and if anything was wrong or queer, it was himself. He said that it was “growing on his mind”, and he was always worrying about it; but he did not suspect that the ring itself was to blame. Though he had found out that the thing needed looking after; it did not seem always of the same size or weight; it shrank or expanded in an odd way, and might suddenly slip off a finger where it had been tight.’

‘Yes, he warned me of that in his last letter,’ said Frodo, ‘so I have always kept it on its chain.’

‘A Ring of Power looks after itself, Frodo. It may slip off treacherously, but its keeper never abandons it

Isildur also reported that it shrank:

It was hot when I first took it, hot as a glede, and my hand was scorched, so that I doubt if ever again I shall be free of the pain of it. Yet even as I write it is cooled, and it seemeth to shrink, though it loseth neither its beauty nor its shape. Already the writing upon it, which at first was as clear as red flame, fadeth and is now only barely to be read.

(LotR, Fellowship of the Ring, The Council of Elrond)

Clip from the movie of Isildur's account showing the ring adapting its size:

The ring isn't shown changing size in the opening, but in the later scene where Gandalf goes to Minas Tirith to research the ring in the library, and he finds an account by Isildur discussing it.

Not the answer you're looking for? Browse other questions tagged the-lord-of-the-rings tolkiens-legendarium the-one-ring or ask your own question.

32
Why did Sauron blow up if he only had his fingers cut off?
25
Would the One Ring work if it was worn on the toe instead of the finger?
23
Did Shelob know about the Ring?
6
Why doesn't the "One Ring" make itself impossible to remove?

9
Did the One Ring choose Sméagol over Déagol?
10
How did Bilbo Baggins find the One Ring exactly?
21
Ring-bearers - who can notice what about whom and when?
22
Can Smaug melt the One Ring?
3
Was there a significant difference between Gollum and Smeagol by the time of Lord of the Rings?
32
Where is the "Ring-verse" inscribed on the One Ring?
78
Why did the One Ring betray Isildur?
46
Is the One Ring sentient?