How did the Marauders know about Hope in the Messiah Complex?

At the beginning of Messiah Complex, the Marauders are already on the scene when Hope is born.

Later on we find out that the Marauder's have access to Nimrod (the robot, not Elmer Fudd) 'future tech'. When did they acquire this, and how does it help them?

How did the Marauders know about Hope?

According to the writers and editors of the X-Office in their X-Men Summit Notes (printed in the Messiah Complex Hard Cover Edition-Nov. 2008), after their Messiah Complex creative retreat in New York on Jan. 2007, they came with few vague ideas and characters that they share to the readers as follows:

In Act One they did set the stage of all the conflict, bringing the players onstage and defining four "camps" they all fit in. One of those 4 camps was the Bad Mutants: Bad guys who want to find the baby to control it. These bad mutants are the Marauders. Their goal: to control the baby. 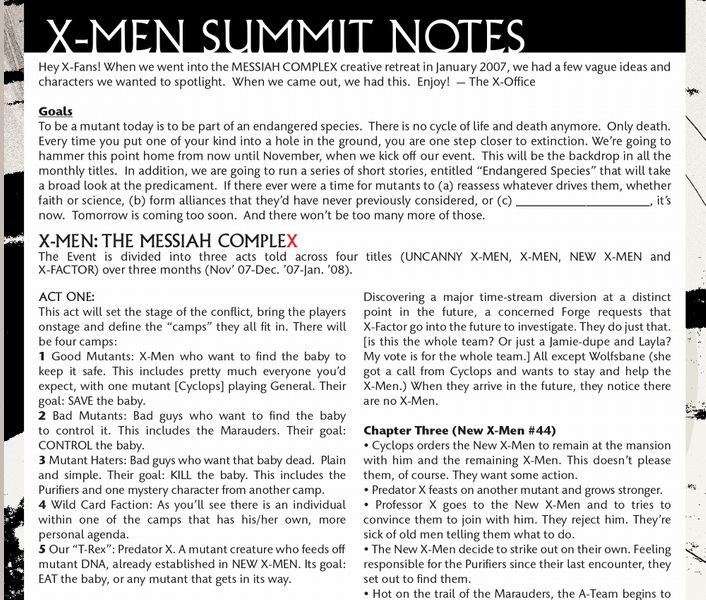 Not the answer you're looking for? Browse other questions tagged marvel comics x-men messiah-complex or ask your own question.

3
Why does Jamie Madrox fall into a coma during “Messiah Complex”?
0
What has changed since the Messiah Complex?
13
Uncanny, Astonishing, Ultimate and Legacy…How does this tie in with X-Men?
27
What timeline is the post-credit scene at the end of The Wolverine in?
13
What purpose did the hologram technology serve in Civil War?
7
Why was Alex Summers in prison?
2
How did the Purifiers know about Hope in Messiah Complex?
3
When/how did the marauders capture Rogue?
2
Why does Raven rescue Logan?