When/how did the marauders capture Rogue?

It transpires during Messiah CompleX that the Marauders have captured Rogue.

When did this happen? I thought Rogue was too powerful to be kidnapped by anyone. Mystique mentions

Which explain how Rogue got into a coma, but not how the Marauders got their hands on her.

How did they capture her? Was she not under observation by the X-Men at that point?

The answer to your question rests in the title "X-Men: Endangered Species (2007)" that recounts the events before X-Men: Messiah Complex.

At one of the rooms of Mystique's house, Mystique and the X-Men are found. Then, all the sudden, the Marauders appear in the room. It starts a fight. Everything is a pandemonium. Iceman gets shot. Then Rogue, which is also at Mystique's house and who is in the middle of a recovery process from being infected with a virus and defeating Hecatomb, wakes up and enters the room where the fight is taking place. Mystique draws a gun and shoots Rogue in the back and says that the mission parameters stand and ask the Marauders to kill everyone. Finally, at the end of the issue, the brawl breaks out. There are not explicit panels showing the Marauders taking or kidnapping Rogue but given that the X-Men, in the opening of Messiah Complex, are looking for her, everything points that the Marauders managed to slip away taking Rogue prisoner. 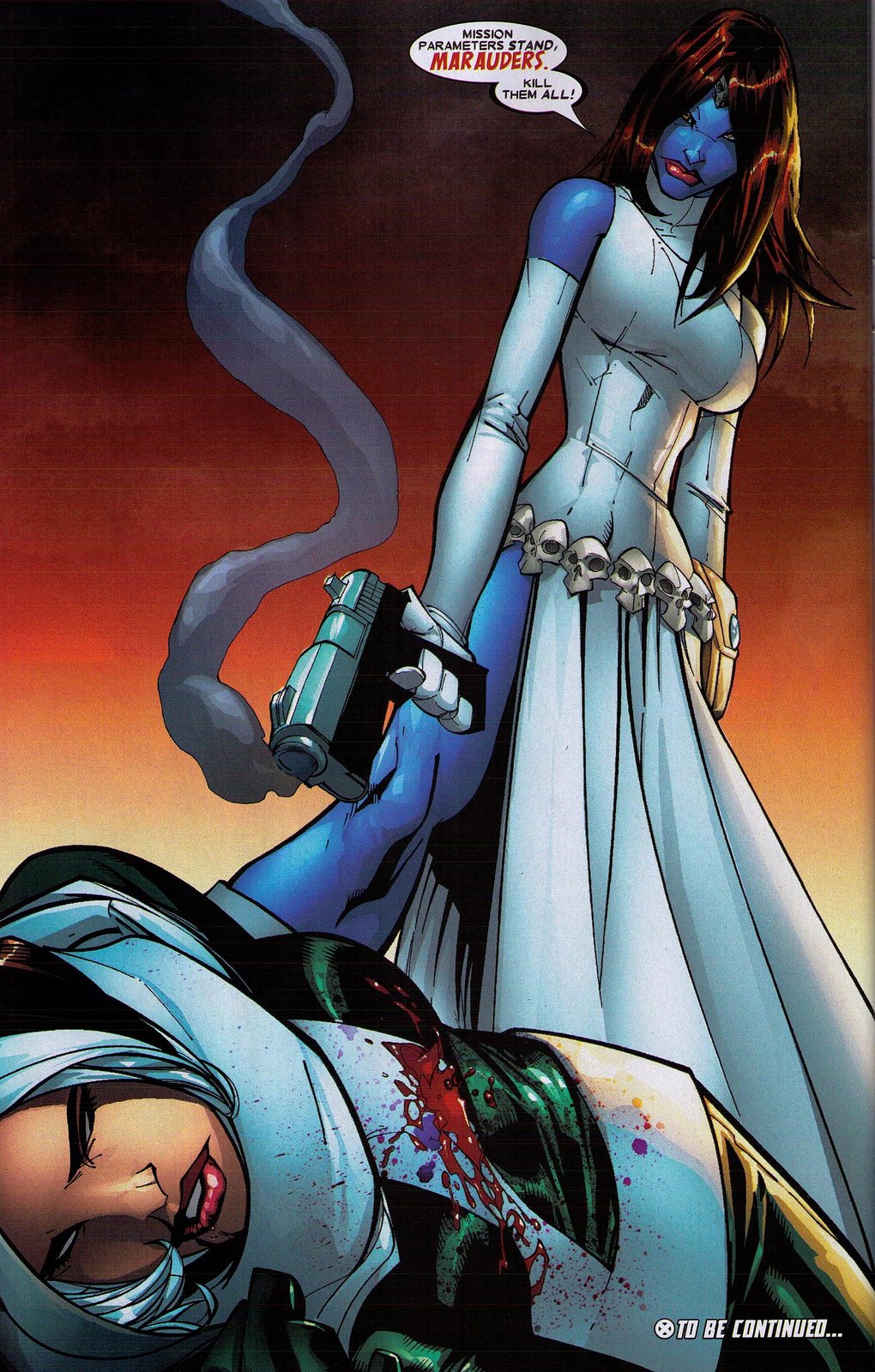 At some point, Rogue grew close to a boy named Cody Robbins. During their flirtation, Cody impulsively kissed her, at which point her latent mutant power to absorb the life energy and psyche of others with skin-to-skin contact emerged. Rogue was traumatized by the experience, and Cody was left in a permanent coma. Hence, Rogue wore body-concealing clothing that eliminated the possibility of accidental skin contact. She wished she "did not have to cover up so much around folks" to protect them from her. She thought her power was a curse

After Rogue's mutation emerges, Mystique begins coaxing Rogue into taking part in her terrorist activities as a member of the Brotherhood of Mutants. Rogue initially wants only a normal life, but after she kisses a boy named Cody, unintentionally rendering him unconscious with her power, she gives up on normality and begins taking part in Mystique's plans.

Rogue and Mystique associate briefly with a mutant named Blindspot, whose power to erase the memories of others by touch somehow counteracts Rogue's mutation enough to allow them to make physical contact safely. Blindspot and Rogue become good friends, but when Mystique decides to sever professional ties with Blindspot, Blindspot erases all memory of her from both Mystique and Rogue.

When Mystique debuts her Brotherhood of Evil Mutants, Destiny advises her to keep Rogue out of the action, advice which proves important when several members of the new Brotherhood are arrested and imprisoned. Mystique concocts a plan to free the other members of the Brotherhood by having Rogue absorb Ms. Marvel's formidable powers. Rogue attacks Ms. Marvel on her front doorstep as she is returning home from grocery shopping. Due to Ms. Marvel's formidable persona, Rogue's struggle to absorb her powers is prolonged, and the transfer of Ms. Marvel's psyche and powers is permanent. Rogue then throws her off the Golden Gate Bridge. She battles the Avengers using her newly acquired powers.

While at the Pentagon, she literally bumps into Carol Danvers, leading into a fight with Storm, Wolverine and Nightcrawler of the X-Men. Though Rogue proves more than a match for them, the four of them escape the Pentagon. Later, with Mystique and Destiny, Rogue attacks Angel and Dazzler, but is overpowered by Dazzler. Rogue develops a grudge against Dazzler for her controllable mutation and her relationship with Angel of the X-Men. Rogue is defeated by Dazzler a few times before Dazzler is publicly revealed to be a mutant and goes into hiding. Sometime after this, Rogue, Mystique and Destiny encountered the half-human, half Dire Wraith entity called Hybrid, with whom the three formed an alliance with against the Spaceknight, Rom. However, when Rogue seized an opportunity to use her power on him, she experienced both his loneliness and his nobility. This moment had a profound effect on her and served as a crucial turning point in her life.

Cited by https://en.m.wikipedia.org/wiki/Rogue_(comics) In the fictional character biography section

Not the answer you're looking for? Browse other questions tagged marvel comics x-men rogue messiah-complex or ask your own question.

16
Why doesn't Rogue have super strength and the ability to fly?
16
How did X-Men hide their real identities when they were wanted fugitives?
42
How much of Thor's power could Rogue steal?
12
When/How did Wolverine learn about his past?
7
Where does Rogue get her name in the X-Men movies?
12
Does Rogue ever take advantage of the removable power suppression we see?
3
How did the Purifiers know about Hope in Messiah Complex?
1
How did the Marauders know about Hope in the Messiah Complex?
2
What was the highest use of raw strength used by Rogue?
27
How does Rogue from the X-Men fly?