How long has the apocalypse been going on?

In The Walking Dead, the outbreak starts in an unknown year, but we know that Carl had to have been at least ten and the show has been going on for six years now and then by the time it's season six Carl is a teen.

So my question is how long has everything been happening for?

We don't know, and the aging of regular characters - especially Carl - is probably not the best way to guess, but we get a ballpark estimate by looking at Judith.

Carl has been played by Chandler Riggs throughout the series, so the producers had no way to slow down the actor's maturing. With Judith, however, the producers have been swapping out babies on a regular basis to make sure the character ages slowly. So far, 16 babies have played Judith.

In most of season one, all of season two, and part of season three, Judith had been conceived, but not born. She was conceived either by Shane and Lori while Rick was in his coma, or by Rick and Lori immediately after he found Lori and Carl.

By season six, the role had fallen to Chloe and Sophia Garcia-Frizzi. Judging by the photo below, the twins appear to be roughly 18 months old: 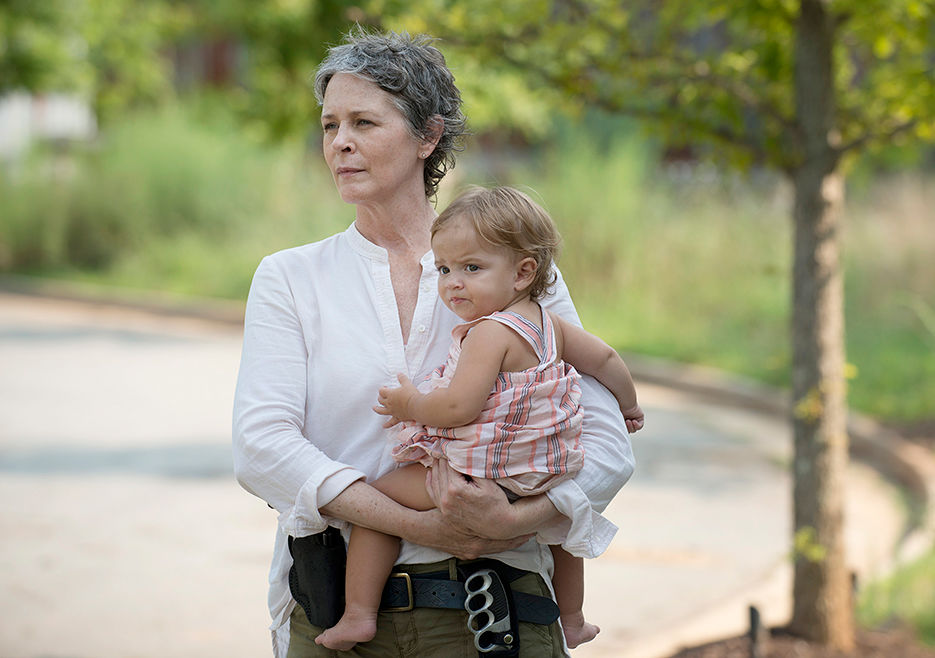 Since the producers have chosen actresses who are the right age for the part, we can use this to work out how long ago the inevitable zombie apocalypse began.

Thus, the inevitable zombie apocalypse began roughly 2 years, 4 months before the events of the season 6 finale.

Rick wakes up no more than a month, and no less than two weeks, after the outbreak became unmanageable and the infrastructure began to fail; the season ends about a week later, when they leave the CDC.

They get stuck in traffic the day after they leave the CDC; the farm is overrun no more than a month or so later, ending the season.

The season begins with the group on the road, having spent the winter wandering from place to place, and Lori is visibly pregnant; the season ends a month or so later, when the Woodbury survivors join the prison group.

A few months have passed since the end of season 3 - the Woodbury refugees have become a part of the prison community, and a farm has appeared where there had been only an empty yard; the season ends a few weeks, perhaps as much as two months, later, when the group reunites at Terminus. Judith hasn't aged much in this time, and even in season 5, she doesn't look much older. 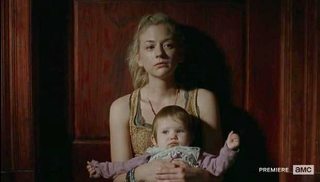 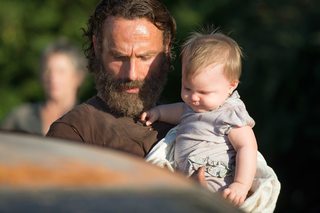 The escape from Terminus in the season premiere happens within hours of Rick's arrival there (Carol is drawn to the site by the sound of the gunfight between Rick's group and the Terminites, which concludes with Rick's group being captured); the season ends with Rick killing Pete a few days after they join the Alexandria community. It seems that all of this takes place over the course of a couple of weeks, probably less than a month. 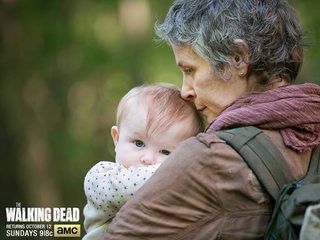 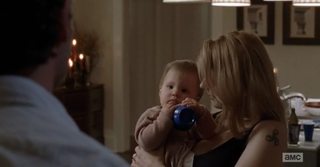 In the season premiere, not much time has passed since the season 5 finale - perhaps a few days. The first half of the season - from the attempt to herd the walkers in the quarry, through the Wolves' attack and walker invasion, and up to Carl's gunshot wound - takes place over the course of two or three days.

There is a two month time jump between episodes 8 (the midseason finale) and 9 (the midseason premiere) - Carl's eye is healing, the walls have been repaired, etc. The second half represents another week or so. 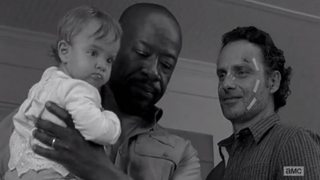 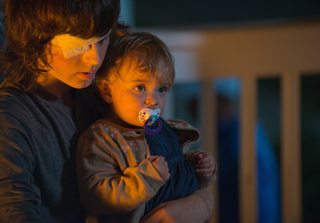 Judith, season 6 premiere (left), and second half of season 6 (right)*

It's day 194 since Wildfire was declared and 63 days since the disease abruptly went global.

After all, Rick had clearly never heard anything about zombies before his coma, because he was totally bewildered when he finally saw one. As a sheriff's deputy, he is a first responder, and would presumably have heard about the crisis as soon as it became an issue in the US.

Judith is now ten years old from the time jump. She has been around since season three. That’s ten years so far. Season three they did not skip much time. It mostly stayed the same. So give or take a few months or weeks off like 1-3 months in that prison. Lito was pregnant and it was being shown extremely in season 2-3 I kind of forgot. Which means adding all those months it’s been 11 years now.

Now they did not stay at the farm for which we saw for the longest time. Then again. Months or weeks could have passed but we would not know. Carl did not look any bit older. So we can say that they were at the farm then again give or take a few from 3 weeks- 1 month So now before that. The group ended up on the road looking for Sophia as we know for a few days. So that means they left the cdc about a day or two ago from the time they got over run. They were at the CDC for about maybe a couple days to a week then again. Because they left pretty early.

So before the cdc they lived at the camp. Carl not looking any other than he did in that picture from the restaurant hat Michonne got. So rick was in the hospital with bad bandages and no water or food. You can’t survive long with a possible infection and dehydration. So he was so good we don’t know. But water you can go for a little. Food a week about. So reality he was in there for a week about. But according to the show. Maybe about a month. Even though he had no food. So yea. The apocalypse has been going on for at the most 12-13 years. Least 11

If Rick was in a coma for any length of time without care as the disease evolved and created more zombies, he would have died from dehydration/Malnutrition and possibly infection as there was no one to change his IV's or wound dressings. The timeline really seems to scatter all over the place but I don't think we can anchor it using Judith and doing backward math to her conception. It would seem to me, that a lot of this would take substantial time to play out and Carl's "growing up" would give a more accurate timeline. Certainly longer than just three years.

The first two seasons only amount to about two weeks of time (post coma). The CDC guy says the infection started 60 some days ago. Another (morgan i think) said the power had been down for a month. The hospital would have generators and would have stayed protected as long as possible. So, rick may have only been left alone for a few days to a couple weeks. At the farm they are worried that winter is coming soon. This puts the current time in autumn maybe end of summer (let's say oct.). Skipping ahead 8 months to season three and winter is over (oct. + 8 = june). Another time jump happens after they merge with the woodbury survivors. Flashbacks show rick starting a garden with leafless trees in the background, so it would seem they skipped another winter. I find online that judith is 8 months old in season 4 (june + 8 = February). Everything from losing the prison through meeting the saviors seems to happen consecutively without gaps (season 5 has judith listed as 9 months to 11 months march-may season 6 7 & 8 she is 1 year june+). In season 7 it seems like darrel is being tortured for a long time, yet when he is brought to alexandria, rick says it hasn't even been the full week that was given to him at their last encounter. It seems that just when trees start looking like fall, you suddenly see it look like summer again. But the kingdom had pomegranates and from what i know they are a late season fruit, so it may still be the end of the year in season 7. That's as far as i have gotten caught up, so the outbreak started early-mid summer and two years have passed by season 7. The same source of judith's age says carl is 12 in season one. Making Carl the biggest 14 year old ever, come season 7.

365 times 6 accounts for the last time jump and according to the The Walking Dead official Twitter account, it's been 632 days from the day rick wakes up til his helicopter ride. Guesstimate about a month of Rick's coma and that would be my guess.

I say that the apocalypse probably started around when the show first aired, therefore Carl being around 10, and once season six aired, he was in his teens, so each season is like a year. But Judith doesn’t seem to age a lot, but not all can be judged on people ageing. Throughout the seasons, more characters end up dying, places becoming more deserted, and zombie groups becoming larger. Another thing is they made a season 7 and 8 in 2017, so it makes sense that it all starts in 2010, when it all started

From looking into it I think that on average each season is about half a year. So season 2 it's been one year, season 4 two years, season 6 three years, and the season 8 four years, so by season 10 it has probably been about five years since the outbreak.

I don't have the official answer, but based on how old Carl looked in the family photo from before the apocolyse, he wasn't that much younger than when reunited with Rick after he awoke from his coma. Depending on how long Rick's coma was, but I am guessing no more than a few months passed from when it started to when Rick awoke.

Is it going to end? Probably not... other than maybe all our main characters dying.

21
How many days passed between the initial outbreak and “Chupacabra” in The Walking Dead?
12
How long was Rick in the hospital?

15
Why hasn’t Rick turned into a Walker?
12
How long was Rick in the hospital?
10
What does “Wildfire” mean?
9
Is the zombie-to-human ratio ever mentioned in-universe in The Walking Dead?
2
Is there any evidence that Frank Dillane is signed for the next season of Fear the Walking Dead?
5
Besides Chandler Riggs, did anyone comment on why Jeffrey DeMunn left The Walking Dead?
4
Has The Walking Dead ever done a crossover with another comic?
4
What happened to Heath?