Do we ever learn Buddy's real name?

Syndrome: ... after all, I am your biggest fan.

Syndrome: MY NAME IS NOT BUDDY! And it's not Incredi-boy either, that ship has sailed.

Mr. Incredible keeps on calling this kid Buddy, but every time get told that is his name is NOT Buddy.

Do we ever learn Buddy/Incredi-boy/Syndrome's "real" name?

The film's end-credits (see below) indicate that Buddy Pine is his given name. It's certainly possible that since Buddy was intended by the animators to be something of a caricature of Pixar Producer Brad Bird, that his name is actually short for Bradley (of which Buddy is a common contraction), but there's no specific indication in the movie that this is the case.

In the scene you're referring to, Syndrome is saying that his name is now Syndrome (e.g. his self-chosen super-villian name) rather than Buddy or Incredi-Boy. 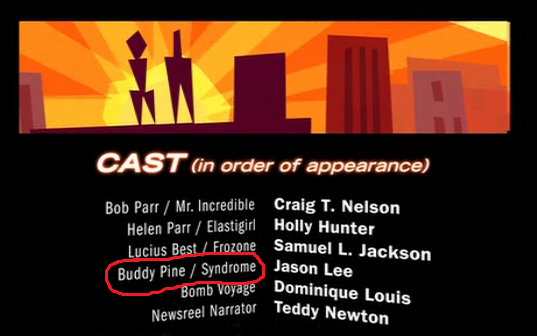 Interestingly, in the original screenplay, after Buddy tells Bob his new name, his character name changes.

BUDDY: Look at THAT! Am I good enough now?

Apparently, his name really is Buddy. IMDB lists the character's name as Buddy Pine/Syndrome. The character's voice is provided by Jason Lee, who some of you may remember from My Name is Earl.

His birth name is Buddy, but the villian known as Syndrome has essentially done away with that name as he associates that with his weaker non-super self.

This is supported by the fact that after the line you mention, he monologues about the changes he's gone through since he was the young wanna be side-kick that was rejected by Mr. Incredible. He mentions that people only respect you when you're a threat and he built weapons and became wealthy in order to do that. Right after that monologue he states his name as Syndrome, which in his mind is the embodiment of how he is different and changed from his weaker original self, Buddy, and should be "respected".

Not the answer you're looking for? Browse other questions tagged the-incredibles or ask your own question.

52
What is Mr Incredible's real name?