Can animals (including insects) carry or become infected with the "zombie" virus in The Walking Dead?

Can non-human animals (whether mammals, birds, insects, fish... etc) become carriers of, or become infected by, the "zombie" virus in The Walking Dead universe? I have developed this question from an initial thought about whether transmission of the virus through mosquitoes is possible (I noticed that as far as we see on screen, they don't appear to be taking precautions against mosquito bites, which suggests that they aren't a threat, but there hasn't been any definitive indication one way or the other thus far).

I have only seen the TV version and know nothing about whatever is in the comics. I am interested in answers relating to either domain (but please specify which one you are referring to in your answer).

Thus far in the TV series, the exact nature of the disease and its transmission is only partially understood. As of S02 E13, 'Beside the Dying Fire',

it is known that all humans carry the virus and will re-animate after death, as long as they have not suffered head trauma that damages the brain.

Before this information was known, the characters considered whether transmission through scratches in the skin was possible (S02 E10, '18 Miles Out'): Remember that this could STILL be a possibility for...

any human that, for whatever reason, has not yet been exposed to the virus and is not a carrier (there could be someone who was mountaineering/hiking in the wilderness, etc. and thus may not yet have been exposed to whatever source has caused other humans to become carriers).

The scratch idea is what got me thinking about the mosquitoes.

Given the fact that

I realise that the possibility of transmission through mosquitoes, or any other animal, is kind of irrelevant anyhow, but I'm still interested in whether this has been clearly addressed anywhere. Whenever we see animals in the TV show, they are either alive and seemingly normal (e.g. the deer in S02 E01, 'What Lies Ahead'; the cattle and horses later in the series), or they have been recently bitten by a Walker but have not actually died yet (e.g. the horse in S01 E01, the cow in S02 E11). We never see any animal that appears to have died and re-animated.

Does anyone know of any clear evidence that definitively confirms or refutes the idea of "zombie animals" (or birds, insects etc.), or animals that are carriers (that is, animals who contain the virus in their system but who are not harmed by it, as in the case of mosquitoes carrying malaria)? Speculation is permitted but I would prefer clear, specific in-universe examples, or information from the authors/creators.

No, we should see little or no infection in animal populations given the parameters of the infection.

In the "Letter Hacks" at the end of issue 38 of the comic, Kirkman sort of addresses this issue.

"Also, is there anyway we'll see some zombie dogs or other animals?"

No zombie animals. Don't these characters have enough to deal with?

The general consensus among fans seems to be that this means that there are no zombie animals - that they're immune. Personally, I find the answer a little vague and open to possibly meaning that the comic just won't deal with them - but that's just me.

Anecdotally, in issue 117, King Ezekial mentions that the virus does not seem to affect animals - though exactly what he is basing this on is unclear. 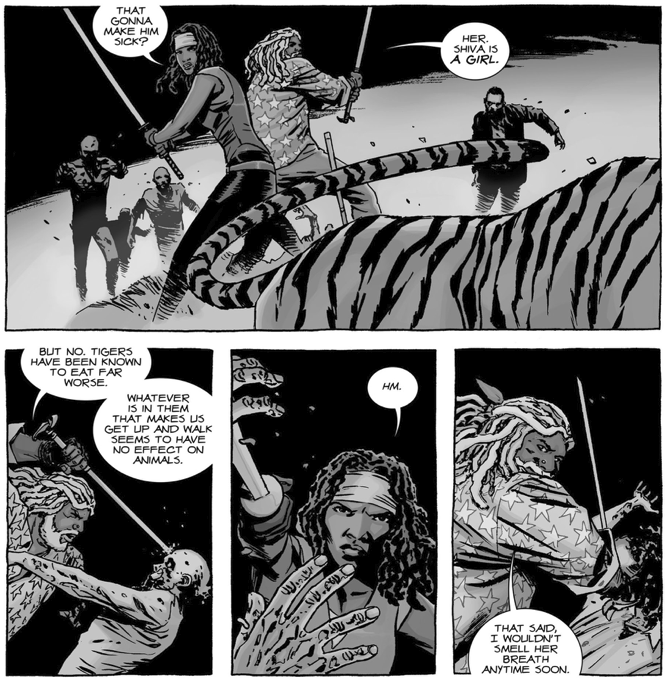 I don't think it's very likely. In the source comics we've yet to see any examples of non-human undead (and the comics have been going on for years).

Similarly, given the rapid spread of the disease the only sensible transmission model is an airborne one. Thus, the only people who are unlikely to have been affected are those who are in airtight seals - such as people who were in submarines. Given the average time a sub can stay submerged before having to resurface, it's likely that every sub has had to surface at least once since the outbreaks, and the crews would thus have been exposed.

My answer is fairly specific to the source comics, but (as far as I know) there's nothing in the TV series that refutes it (though it's possible the series could still have subs that haven't had to surface yet).

Here's some interesting facts (assuming that the virus is airborn):

I know when they were on the farm, Hershel mentions that there is a segregated/ safe area where he keeps the farm animals they have been using to eat. So I think that although it isn't really answered , and we have yet to see them encounter a virus infected animal, that it is safe to assume that it is something they worry about and think about. Hopefully come Oct. 13th and throughout the new season, we can have some more answers.

I know if I was in the WD, it is something I would be worried about for sure, I am surprised that Daryl hasn't mentioned anything about the animals and whether they get infected from being attacked by the undead, for how many birds, coons, squirrels, etc. He has bowed and eaten. ¤meloddic¤

I do not know how much the TV script will diverge from the comics, but I think they have left a clue as to how the virus has been spread: Crows

The birds are in the opening credits. In several of the illustrations and visuals in the menus there are depictions of flocks of crows. If you listen to the background sounds in many, many many scenes (the farm, the school, etc) you either see or hear crows.

Likely that a bird species would be a carrier of the virus and be responsible for widespread distribution, while not succumbing to the virus itself. It happens all of the time in "real life".

If you watch the Season 1 and 2 intro, they always show a clip of blackbirds eating blood/flesh from a blood soaked teddy bear (what it is exactly I may be incorrect as I dont have the film in front of me). This got me to think that the virus was able to be carried by animals even though the host never contract the illness. This perhaps helped to spread the virus to non-adjacent communities. So I agree with @Thaddeus assessment -specifically point 4. I do not recall seeing an instance where we see an animal infected although the zombies make little distinction upon available flesh to eat (e.g. horses, cows, etc).

I think personally that with all of the information they have given us animals should be infected but most of the time they get killed before turning i.e when ricks horse was eaten alive. But the cow that was in the field of the farm..

That had was being eaten by the zombie that killed the old guy with the R.V

had made a weird noise that I thought was either it turned or maybe just my imagination. Anyway the disease is also a brain cancer type deal so some bugs have only basic instincts in the first place so it would not technically effect them. But the thought that if an insect bit you that you would turn is also like saying that if Rick bit Carl, Carl would turn.

There are no zombie animals in the comic because the guy who draws the comics doesn't like drawing animals. I strongly believe that infected birds will be the new threat in season 4 of The Walking Dead.

JamesJames
1
Add a comment  |
Highly active question. Earn 10 reputation (not counting the association bonus) in order to answer this question. The reputation requirement helps protect this question from spam and non-answer activity.