Is there any comic book canon for Batmans lack of morals in Dawn of Justice? [duplicate]

Ask Question
Asked 3 years, 11 months ago
Active 3 years, 3 months ago
Viewed 1k times
0
This question already has answers here:
In comics does Batman have a rule against killing? (4 answers)
Closed 3 years ago.

I just watched Batman V Superman: Dawn of Justice, and in it, Batman seems to display a complete lack of moral code. He has no issue with killing in the name of the law, even throwing a man through a floor (I assume that would break his neck or fracture his skull), repeatedly stabbing a man to death, shooting a fair few people, not to mention the branding of criminals and using the Gotham prison system as his own personal outfit to deal with/kill criminals. He was even referred to as 'the warden' in the last Lex Luther scene. This is contrary to the Christopher Nolan interpretation in the Dark Night trilogy, and the (few) comic books that I have read where Batman attempts to non-lethally deal with his enemies, and ensure that they face justice.

I realize that in this movie, Batman is old, bitter and scarred after fighting for years, so he may have become a tad overzealous in his crime fighting ways. He had a robin, and then lost him. Is there any comic book interpretations of Batman where he takes the ultra-violent role of Judge, Jury and Executioner?

Firstly, it should be noted that virtually any vision you have for Batman with respect to killing, at SOME point the comics have gone there. In his earliest days, Batman (and Superman) killed all the time. However, relatively quickly a newer standard was set of Batman not killing, ever, and in fact often doing everything in his power to save the lives of criminals (although, to be fair, a lot of the time he still did ridiculously violent actions that could easily lead to death, and where it was only by editorial fiat that nobody he beat up ever had a fatal concussion from it).

There are a few exceptions, and almost always, they were overturned. One notable case is the KGBeast, who, in Batman #420, the writer intended that Batman lock him in a room with the intention of letting him starve to death. 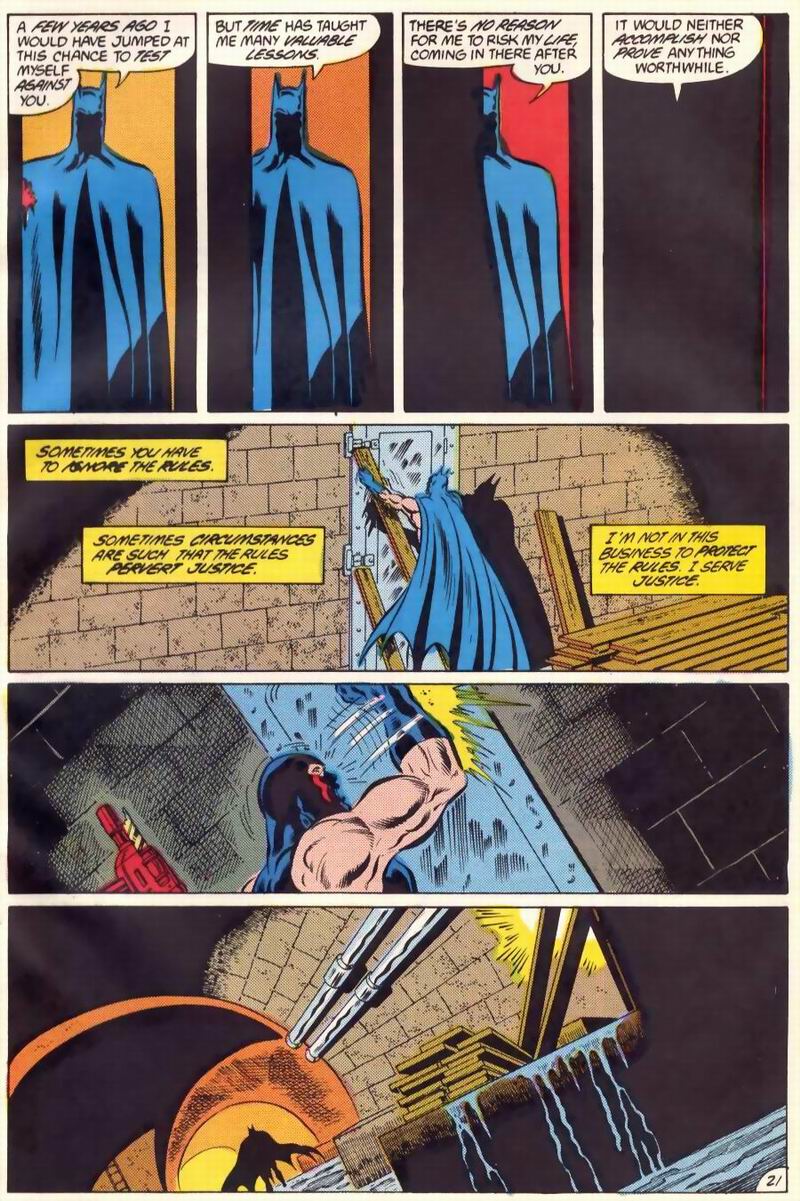 As this article describes, the next writer seemed to reverse it and retconned it and had Batman say he informed the police hours later.

Now, where did Zack Snyder get his justification for Batman killing? Well, in this article, you can read the following quotes from him:

I tried to do it in a technical way. There’s a great YouTube video that shows all the kills in the Christopher Nolan movies even though we would perceive them as movies where he doesn’t kill anyone. I think there’s 42 potential kills that Batman does! Also, it goes back and includes even the Tim Burton Batman movies where this reputation as a guy that doesn’t kill comes from.

It should be noted that the reputation that Batman doesn't kill does not in any way come from the Tim Burton movies (where often the same cavalier attitude towards killing is present).

So, I tried to do it by proxy. Shoot the car they’re in, the car blows up or the grenade would go off in the guy’s hand, or when he shoots the tank and the guy pretty much lights the tank [himself]. I perceive it as him not killing directly, but if the bad guy’s are associated with a thing that happens to blow up, he would say that that’s not really my problem.

It should be noted that many of these things are still considered murder.

A little more like manslaughter than murder, although I would say that in the Frank Miller comic book that I reference, he kills all the time. There’s a scene from the graphic novel where he busts through a wall, takes the guy’s machine gun… I took that little vignette from a scene in The Dark Knight Returns, and at the end of that, he shoots the guy right between the eyes with the machine gun. One shot.

It should be noted that the scene in The Dark Knight Returns does not happen as he remembers it... 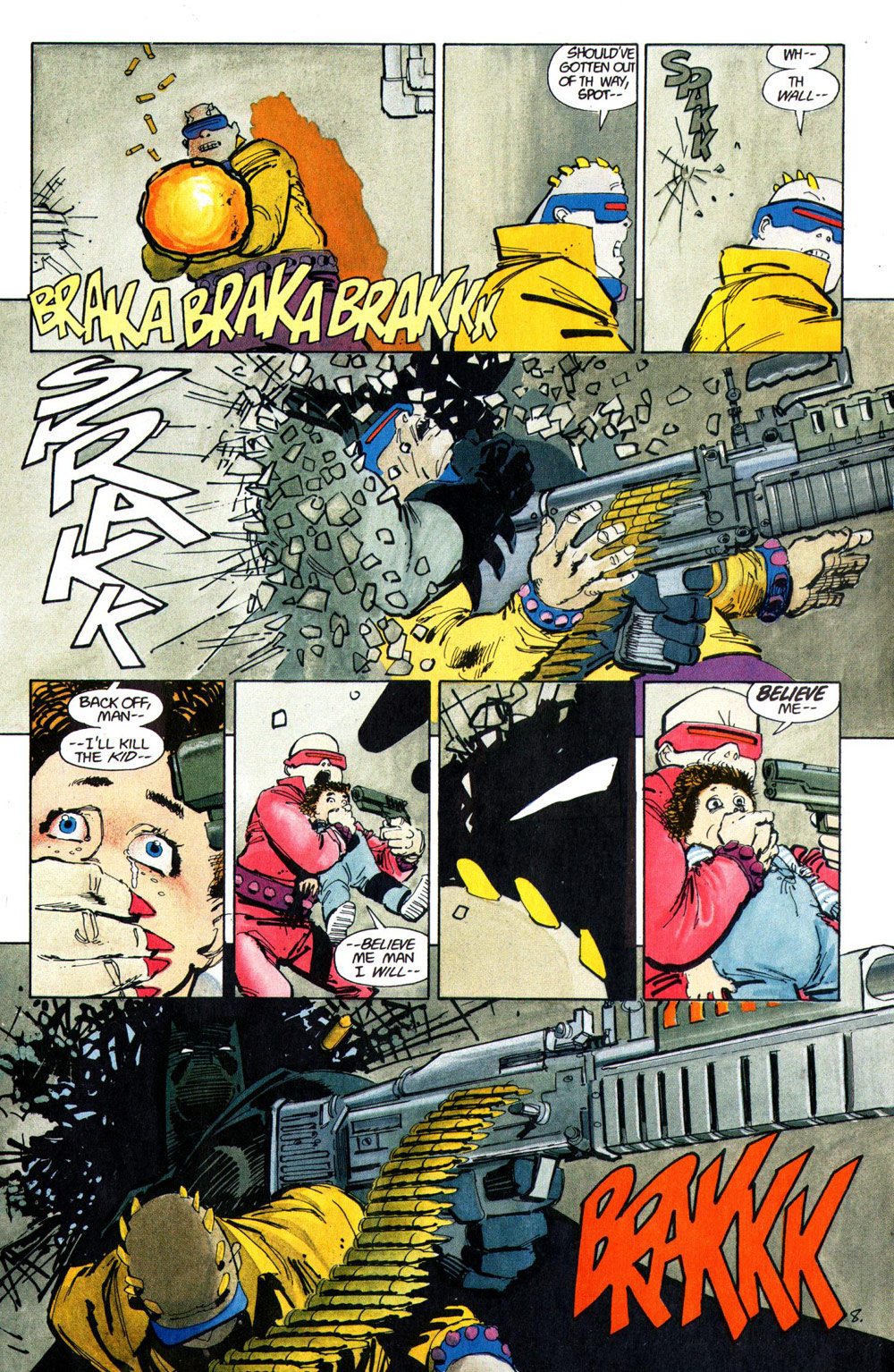 It certainly looks bad, but there's a detailed analysis of the scene here, but in very brief terms:

No, in the scene in question there was no on-panel killshot, there's evidence from other scenes that the thug was not killed (though was probably shot), and in fact there's later a major plot point in the series that hinges on Batman still not being willing to kill, subduing a threat is enough. If Batman was the kill-happy vigilante Snyder thought he was, the scene would make no sense at all.

Batman doesn't have a rule against breaking people's bone or causing them severe injury. He does have a thing against letting someone, even a criminal, die. He will attempt to save those he can, but if something happens while he's fighting that he can't prevent then he doesn't worry about it. Non-lethal and non-brutal are not the same thing and the older Batman gets in the canon that Hollywood people keep taking inspiration from he gets more brutal.

Also. I suggest you watch the extended version of Dawn of Justice or pay attention better to the movie. There are several things you are acrediting to Batman which he did not do, such as "killing criminals he branded".

Also the source that Hollywood draws from is pre-Tim Drake which had Batman spiraling out of control and becoming excessively brutal. That was why Tim Drake took up the mantle of Robin against the wishes of Batman. TDK and TDKR never had a Robin in their timeline to reign him back in and this is where we find BvS Batman.

As far as other ethics that Batman has expressed with regard to "killing" or "using a gun" is that he does not, not because he is against it, but because that is a sacred trust given to the police and the government. In the scene where Batman uses guns and kills people in BvS there is supposedly no government and thus those rules are gone.

As far as "saving" people, Az-bat lets Abetoir die and this is a clear sign to Tim and the rest of the bat-family the guy is not suited to be Batman. That should tell you about how Batman and the bat-family feels about that situation.

16
In comics does Batman have a rule against killing?