What was life like for the average Coruscanti, during the Galactic Empire?

What was the general quality of life on Coruscant for the common citizen, during the days of the Galactic Empire?

In particular, were conditions worse on Coruscant than somewhere like Tatooine?

In the new "Tarkin" novel, there's a pretty good description of Coruscant during the period of Empire. Basically it's pretty nice and the average Coruscanti citizen seems reasonably happy with their lot in life. There are mentions of work being readily available (especially in construction) and a good range of facilities, sporting events, cultural activities and general entertainments.

Certainly the lowest levels and industrial areas were heavily crime-ridden and gang-controlled (something that Palpatine had secretly allowed during the Clone Wars) but this was being brought under control by Vader and his underworld contacts and for the most part, it was non-humans (living in ghettos) that populated the lowest levels rather than human communities.

He had heard that one needn’t have been absent from Coruscant for years to be startled by the changes, in that each day saw buildings raised, demolished, incorporated into ever larger and taller monstrosities, or merely stripped of Republic-era ornamentation and renovated in accordance with a more severe aesthetic. Curved lines were yielding to harsh angles; sophistication to declaration. Fashions had changed along similar lines, with few outside the Imperial court affecting cloaks, headcloths, or garish robes. By most accounts, though, Coruscanti were satisfied, especially those who lived and worked in the upper tiers of the fathomless cityscape; content if for no other reason than to have the brutal war behind them.

We (the viewer) don't spend a lot of time at ground level for obvious reasons, but by all accounts the standard of living for the average Coruscanti is vastly above that of the average Tatooinian. For those that are below the average (which primarily includes non-humans), things are admittedly pretty shitty. The air is polluted near the ground and crime is endemic.

Wealthy citizens in the city's upper levels breathe rich, filtered air. Undercity dwellers, however, are forced to inhale the toxic fumes from millennia of vehicle and factory waste

The new (canon) comic Obi-Wan and Anakin #2 gives us a glimpse into the actual living conditions of those who live in the "sub-surface" areas of the planet. As you can see, it's dusty, dirty, dark and decidedly unpleasant, albeit not without its crude charms. 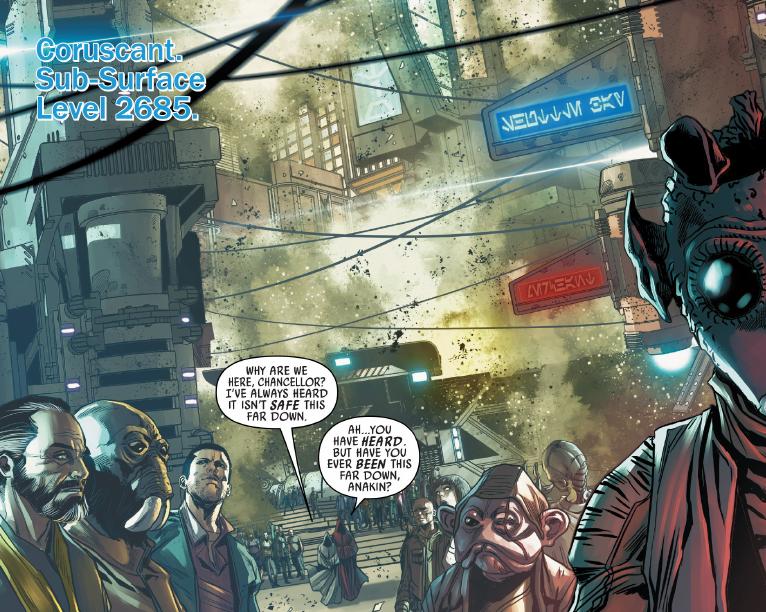 8
How did the New Republic gain control of Coruscant?
7
Has the Galactic Empire ever conducted large scale ground battles?
9
What did Coruscant's nature look like before it was urbanized?
1
What was the Coruscant police force of the Empire?
9
What is the state of relations between the Galactic Empire and the Hutt Cartel?
18
Did the Empire know the Falcon was going to Alderaan?
5
Was fighter pilot training part of a Jedi Padawan's training during the times of the Galactic Republic?